Andrew Cuomo, New York’s follower in chief and No. 1 demagogue on energy issues, has succeeded in driving more wealth out of the once Empire State than any other governor in any other state. That’s the takeaway from a new Bloomberg analysis of the latest migration data from the Census Bureau:

New York suffered the most income drain in state-to-state moves.

New York’s annual net loss was the highest, with a net $8.4 billion leaving the state. Existing incomes of $19.2 billion were replaced by people who brought in $10.7 billion less in income. 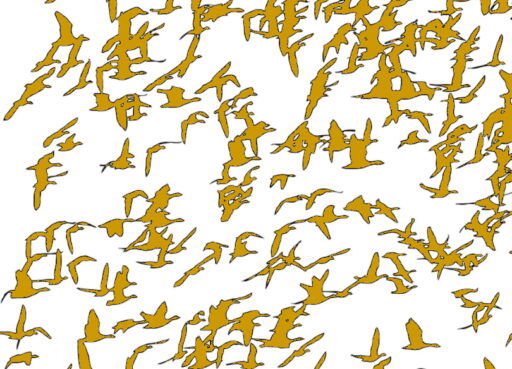 Illinois and New Jersey were next with net outflows of $4.8 billion and $3.4 billion, respectively.

Those three states also had three of the four highest proportions of outbound versus inbound residents last year, according to the United Van Lines, the largest U.S. household goods mover.

Climate Change Hysteria Is No Help

Some common sense from Bjorn Lomborg:

Let’s be clear. Climate change is real, manmade and we need to tackle it. But do we need to present it as an apocalyptic crisis? Here’s the problem: The media and politicians are going far beyond the science, and by setting out to scare us, they risk making an entire generation over-worried and worse off — while tackling climate change badly.

According to the UN climate science panel’s last major report, if we do absolutely nothing, the impact of rising temperatures will be the equivalent to a reduction in incomes of between 0.2 and 2% in the 2070s. That is equivalent to the impact of a single economic recession over the next half-century. To put this in context, humanity has managed to get through three global recessions in the last 40 years.

The panel notes that for most sectors, “the impact of climate change will be small relative to the impacts of other drivers,” such as changes in population, age, income, technology, relative prices, lifestyle, regulation and governance…

We have been here many times before. In the early 1970s, the Club of Rome think tank predicted humanity’s collapse: We would run out of food, oil and all other resources, while runaway pollution would kill us. The prescription was dire (and just the same as today): Cut consumption, have few or no kids and stop economic growth…

Climate activists embellish, because they know their proposed fixes are incredibly expensive. Just the annual cost of the climate promises in the New Green Deal could cost more than $6,400 per person. Consider that a new survey shows nearly seven in 10 Americans would vote against spending just $120 each per year to combat climate change…

“Climate emergency” talk neglects the fact that we need better and cheaper climate policies that can also work in China and India.

What are those policies? Well, natural gas development, which has already accomplished enormous reductions in CO2 emissions through substitutions for coal, is one. I’ll start following the advice climate change policy advocates when they acknowledge that fact and recognize gas has been and will continue to be part of the solution.

We Told You Not to Trust This Guy!

How many times did we tell you Josh Fox (remember him?) was not to be trusted? 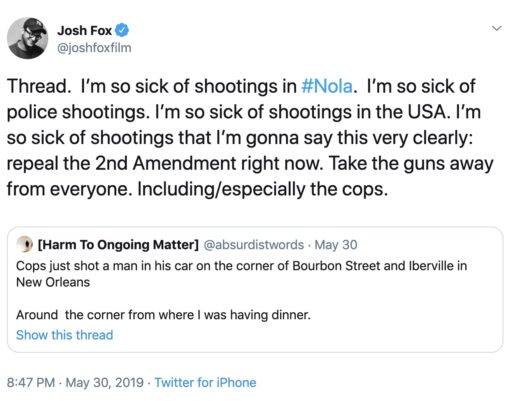 No guns, “especially [for] cops” is Josh Fox’s position. This is the man held up (for his 15 minutes of fame) as a hero by fractivists a few years back. We told you…

Trade Unions Have Rightfully Had It with Fractivists

Trade unions represent the best of America; hard-working, family-oriented and patriotic builders of our future. They are, today, though confronted with radical environmentalists characterized by trust-funders living the good life and determined to tear it all down for everyone else. And, many trade unions have had it with fractivists:

Earlier this year, the Illinois AFL-CIO and the Illinois Manufacturers’ Association shared a flyer with members of the Illinois State House asking them to support the “Critical Infrastructure Protection Bill,” which would enhance penalties for damaging, destroying, tampering with, or trespassing on pipelines, coal mines, and other energy infrastructure. The flyer shows an article from progressive outlet Common Dreams, featuring a photo of climate protesters clad in bright orange safety vests, shutting down two crude oil pipelines in Minnesota.

The fight over Illinois HB 1633 offers a localized look at why creating alliances between green and labor groups continues to be challenging. The AFL-CIO and the bill’s other supporters said the law would protect “the health and safety of protestors, employees, and communities.”

…AFL-CIO President Richard Trumka supported the Keystone XL pipeline and spoke out against the Standing Rock protests. “Trying to make climate policy by attacking individual construction projects is neither effective nor fair to the workers involved,” he said in a 2016 press release.

Terry O’Sullivan, general president of Laborers’ International Union of North America, whose Chicago council supported the Illinois bill, said that the rift between building trades unions and environmental groups over the Keystone XL pipeline was as “deep and wide as the Grand Canyon.” “We’re repulsed by some of our supposed brothers and sisters lining up with job killers like the Sierra Club and the Natural Resources Defense Council to destroy the lives of working men and women,” he added. 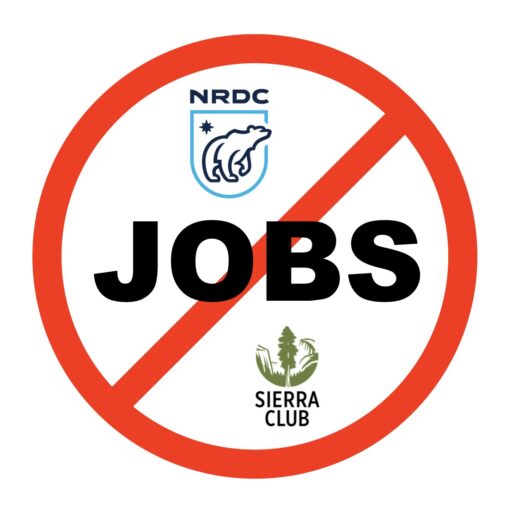 More recently, in March, the presidents of the United Mine Workers and International Brotherhood of Electrical Workers wrote to Green New Deal sponsors Senator Ed Markey (D–Massachusetts) and Representative Alexandria Ocasio-Cortez (D–New York) on behalf of the AFL-CIO Energy Committee. “We welcome the call for labor rights and dialogue with labor, but the Green New Deal resolution is far too short on specific solutions that speak to the jobs of our members and the critical sectors of our economy,” they wrote…

Many union members are skeptical that the green jobs environmentalists talk about will ever materialize. Phil Smith, a spokesman for UMWA, told Reuters in February, speaking of the Green New Deal, “We’ve heard words like ‘just transition’ before, but what does that really mean? Our members are worried about putting food on the table.”

The unions are entirely correct; fractivists don’t give a damn about the welfare of union members. The only thing that matters to them is the trust-funder environmental agenda, which is to tear down everything around their personal enclaves so they can live in the splendor of an English estate guilt-free by virtue of their moral preening.