Green Eggs and Scam Hasn’t Been A Cheap Breakfast

This is corporate robbery behind “green” energy, as opposed to natural gas:

To keep the renewable industry afloat, Americans will pony up more than $120 billion from 2006 through 2029 in the form of direct subsidies, tax credits, and mandates for generation and transmission. Rather than benefit taxpayers, these funds will primarily boost the profits of multi-billion-dollar generators and Wall Street bankers who invested the $55 billion last year, along with providing for generous donations to “non-profit” advocates of renewables in capitols across the country (who then lobby for even more subsidies). 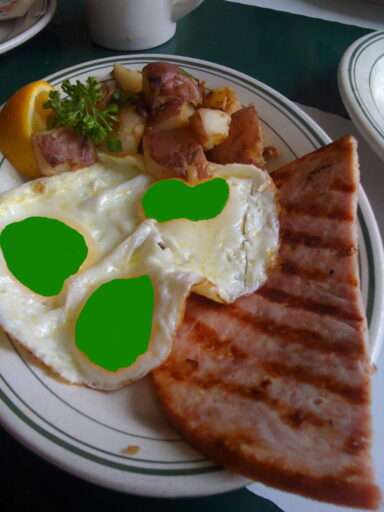 The biggest subsidy for renewables is the federal production tax credit (PTC), which Congress first adopted in 1992—and renewed once again last December. The PTC largely benefits wind generation, and will cost taxpayers more than $51 billion through 2029—money that’s going to companies with combined market caps of more than $300 billion.

The solar industry also gets it share of subsidies. Though solar power is highly inefficient and extremely expensive to produce, that hasn’t stopped the federal government from giving investment tax credits (ITC) to the industry that will exceed $25 billion.

If It Ain’t Broke (and It’s Saving Your Ass), Don’t Fix It

Some wise advice on fracking, natural gas and the shale revolution:

Fracking has unlocked unprecedented energy reserves, propelling America to its newfound status as one of the world’s leading energy producer and exporter.

Though most people who don’t work in the energy industry don’t recognize, the availability of affordable, reliable energy has a massive impact on our everyday lives.

For decades, OPEC’s stranglehold on global oil prices left the United States, and most other countries, at the mercy of other nations for the energy we depend on. The oil embargoes of the 1970s caused mass gas shortages, rationing, and skyrocketing prices — a phenomenon nearly unheard of today. Even after Iran launched missiles at our allies’ air bases and shot down a Ukranian passenger plane, causing significant global unrest, gas prices barely rose a few cents. 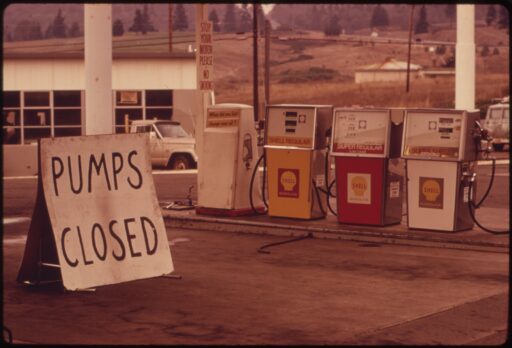 These days are but a distant memory thanks to fracking…

Fortunately, America has become “energy dominant” — meaning we are massively self-reliant and produce enough energy to cover most of our oil needs, as well as export to our trading partners. Whereas the U.S. produced around 6.8 million barrels of petroleum per day in 2008, the country produced over 17 million barrels per day in 2019!

Fracking contributed to 59% of total U.S. crude oil production and two thirds of natural gas production in the latest data available. Those proposing fracking bans evidently want to obliterate an entire sector of the country’s energy production based off unsupported and misleading allegations.

Banning fracking would decimate our energy supply and cause electricity prices to skyrocket — meaning limited or expensive electricity to power our hospitals, banks, law enforcement agencies, businesses, farms, factories, grocery stores, and homes. Over a 5 year period, this measure would cost the United States nearly 15 million jobs. During a time when unemployment rates have reached historically low levels, should we be taking steps backwards?

Since evidence overwhelmingly suggests fracking is a safe and effective tool to harvest the energy that powers our economy — not to mention has the power to eliminate poverty around the world — policymakers should focus instead on solutions that will actually benefit their constituents.

Simply said, if it ain’t broke, don’t fix it.

There’s no improving that.

NY Green Bank Announces Strongest Quarter to Date,
Spending More of Your Money in Fourth Quarter of 2019 Than Any Other Quarter

Oh, goody! Andrew Cuomo’s NY Green Bank slush fund has more of your money thane ever to work with than ever in subsidizing green eggs and scam:

NY Green Bank today announced that its fourth quarter of 2019 was the strongest to date with more capital committed than any prior quarter, adding $117.5 million to its current portfolio. This achievement complements NY Green Bank’s strongest calendar year yet with a total of $276.1 million committed in 2019, growing its total portfolio commitment to over $909 million and spurring up to $2.4 billion in clean energy investments. These investments support the State’s goal of an 85 percent reduction in greenhouse gas emissions by 2050 and Governor Cuomo’s Green New Deal, the nation-leading clean energy and climate agenda that has set the State on the path to economy-wide carbon-neutrality…

Transactions closed during the fourth quarter of 2019 include:

This is what it’s all about; opportunities for investments in government rent seeking. More green eggs and scam. And, who is paying? You are. Here’s a typical New York State electric bill: 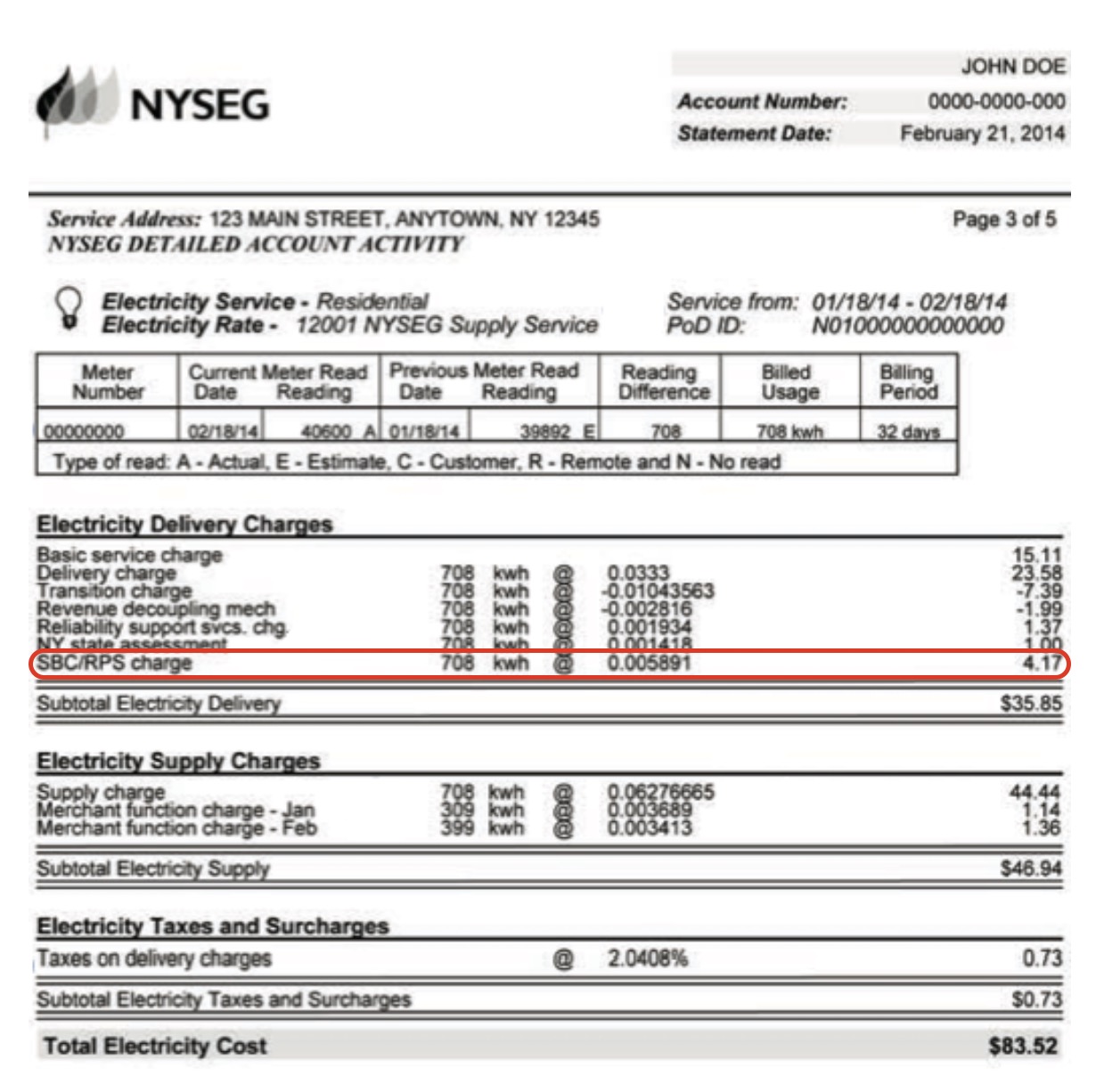 See that “SBC” line? It’s an acronym for an Orwellian named “System Benefit Charge” you’ll only understand if you read the fine print on the NYSERDA news release:

NY Green Bank is a division of NYSERDA. NY Green Bank is a state-sponsored, specialized financial entity working with the private sector to increase investments into New York’s clean energy markets, creating a more efficient, reliable and sustainable energy system. NY Green Bank’s investments and activities support Governor Cuomo’s Green New Deal, which requires that 70 percent of the State’s electricity come from renewable sources by 2030 and calls for 9 gigawatts of offshore wind by 2035, 6 gigawatts of distributed solar by 2025, and 3 gigawatts of energy storage by 2030.

Yes, you’re paying for Andrew Cuomo’s politicking and green virtue signaling and paying for it all, every bit of it, while he won’t even permit the development of natural gas.

A State for Upstate?

Our poet laureate, Aaron Price, says there’s one solution for the above:

Look at all the people who leave here;
In New York they have lost their faith.
And no trinkets or beads
Will buy back our rights.
We want economic justice for Upstate,
Or New York State to divide. 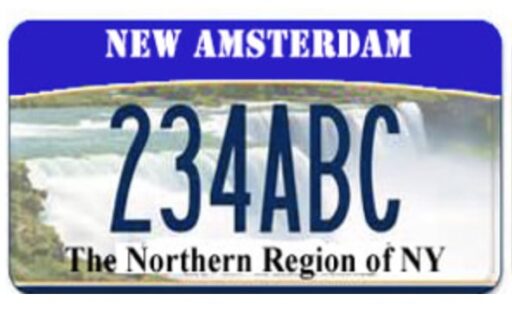 And who can see Upstate’s plight
And not see the need
To compensate Upstate for its losses
Or, else set Upstate free?

Set it free, indeed, one way or another. How about some autonomy for Upstate, some freedom from the tyranny of ignorant metro manipulation and domination?