This story is so revealing (and bizarre):

Gov. Cuomo released a trippy, nautically-themed illustration Thursday, that he says depicts the state’s fantastic odyssey during his three-term reign.

The poster-sized image — which immediately became the subject of mockery online — was personally designed by the governor and includes such off-the-wall touches as an octopus labeled “Intolerance” and a rock stairway of accomplishments that for some reason leads to a sheer cliff. 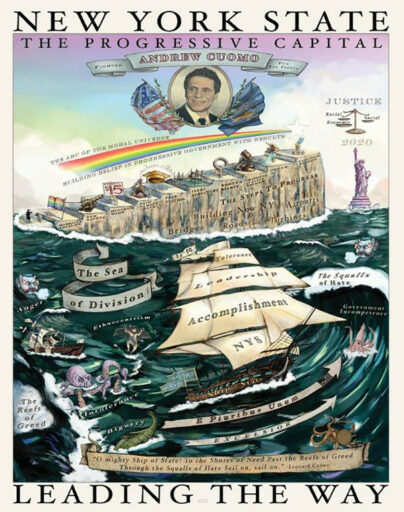 Cuomo’s masterpiece centers around an old-timey drawing of a sailing ship (helpfully labeled “Ship of State” in case you didn’t get it) navigating stormy seas along with numerous labels on every element, from the “The Reefs of Greed” to a squid called “Government Incompetence.”

There’s even a rainbow that he called “The arc of the moral universe” and not one, but two arrows pointing the way — right into a “Perfect Storm”-sized tidal wave.

The governor capped it off by putting the words “New York State The Progressive Capital Leading the Way” as the title — which he modeled after 19th century political posters.

The governor spent two months sketching the image as he worked on his annual State of the State speech, said his staff, which would not comment on the record.

Give us your thoughts on this latest exploit by the guy who thought kids could fall down gas wells.

Think about the ways this, combined with the shale revolution here, has changed everything in the Mideast:

In March 2013, I noted that Israel’s discovery and development of huge offshore natural gas fields was a game-changer, putting Israel on course to become an energy superpower.

At that time, the field that had just come on line was the Tamar field…

The Tamar field was small change compared to the much larger Leviathan field, as I described in 2015, Israel one step closer to being energy Superpower… 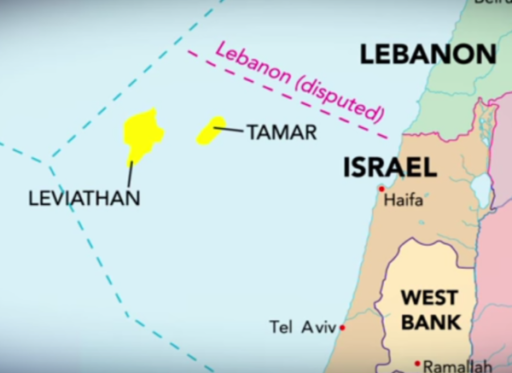 The Leviathan development was delayed by bureaucratic snafus and environmental opposition, but just came on line. And this is a big deal.

The Times of Israel reported on December 31, 2019, that natural gas began flowing:

“Gas began flowing from the mammoth Leviathan offshore natural gas field on Tuesday, after the government gave a final go-ahead to Noble Energy to forge ahead with the project despite vocal protests from residents of the coastal region who are concerned about the pollution emitted by the rigs.”

“The Environmental Protection Ministry said Monday that Noble Energy and its partners had met all the necessary conditions to begin pumping gas, paving the way for the rigs to begin extracting the estimated 22 trillion cubic feet of gas trapped underground.”

“Early Tuesday morning Noble began a gas rig test that is necessary ahead of starting operations, and later that morning the partners in Leviathan announced the start of natural gas production from the reservoir, the largest energy project in Israel’s history.”

“The first gas will reach Israel’s shores via the pipes within 24 to 48 hours from the start of production, the companies estimated.”

But wait, there’s more. Israel also signed a huge natural gas deal with Greece and Cyprus to ship natural gas to Europe, and commenced gas deliveries to Jordan and Egypt.

This is an amazing development. What can’t natural gas do?

Assembly Democrats have selected their members of the Climate Action Council, which is tasked with coming up with a scoping plan to get the state to net-zero emissions in three decades, according to Assembly spokeswoman Kerri Biche. With two academics and one advocate, the three appointments are the first by Democratic leaders.

They include Peter Iwanowicz, a former commissioner of the Department of Environmental Conservation and current head of Environmental Advocates of New York, a prominent and influential group in Albany. Assembly Speaker Carl Heastie also selected Bob Howarth, a well-known academic who regularly weighs in on natural gas infrastructure issues and fought fracking in New York. Howarth is a professor of Ecology and Environmental Biology at Cornell.

The self-destruction of the former Empire State not only continues, but picks up pace,  Bob Howarth? Really? Unbelievable! New Yorkers, you are doomed.

And, from the NaturalGasNOW Poet Laureate,
An Ode to Landowners

From our Upstate New York friend Aaron Price, some words of wisdom on what’s been happening in New York for a long, long time, starting with the theft of Delaware County land and Delaware River Basin water to create the Cannonsville Reservoir that provides New York City, with a water supply:

The history of Cannonsville weighs heavily

On our minds.
And the importance of that history
Grows, not diminishes, with time.
For what was done with water there
Is now being done with our land.
And that, landowners, is unfair.
No one in Albany has the right
In the name of myth, not fact,
To control how you develop your Upstate
Land unless they are willing to
Compensate you.
Landowners have every right to lease
Their land for Green or for gas.
If Pennsylvania can do gas drilling safely
And smartly, so can we.
Look at the happy faces you see
Across the border.
Take a drive some time from Upstate
To PA and notice the change.
It’s a better sense of mood and place.
In the Commonwealth, people have
It great.
Landowners, there is no way after the
High taxes you pay on your land in
New York State,
That you can be treated as second
Class citizens in your own country.
But that is what it feels like today.
And that is why things must change
In your political relationship with Albany.
Landowners can never forgive or forget
The political crime committed against them
When the ban on high volume, hydraulic
Fracturing was imposed.
From Cannonsville to fracking, it’s all about
Your loss of rights and their control.
Albany, please be worthy of us, and our

Love of our State and our land. 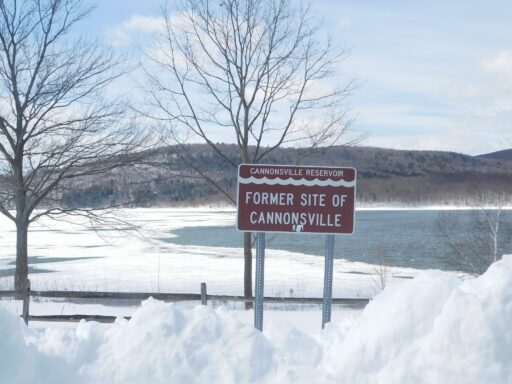