The DRBC is on yet another power trip:

“DRBC has recognized potentially significant impacts to the water resources of the Delaware River Basin posed by climate change, for example, salinity impacts from sea level rise and changes in the seasonality and volume of streamflows,” said DRBC Executive Director Steve Tambini. “The ACCC will provide the commission and the basin community with vital, scientific expertise for identifying and prioritizing these threats and vulnerabilities, as well as provide recommendations for mitigation, adaptation and improved resiliency.”

The ACCC will be comprised of up to 18 individuals with relevant expertise, split in half between reserved (appointed by the commissioners or their alternates, representing the basin states, federal government, New York City Bureau of Water Supply, Philadelphia Water Department, and the Partnership for the Delaware Estuary) and non-reserved (appointed by the executive director, representing academia/research institutions, environmental/watershed organizations, business/industry, and/or water/wastewater utilities) members. The committee is authorized for 10 years and can be renewed or extended prior to its expiration in 2029.

What a joke. The DRBC committees are simply excuses to appease know-nothing academics and environmental special interests. The committee will be dominated by them and go-along to get-along big business types. Expect the Delaware Riverkeeper to have yet another seat at the table from which to stand upon and scream “Stop Everything!” (especially natural gas) in the name of a new “threat” they can exploit.  There won’t be anyone from north of Easton, no landowners and nobody real. But New York City will be heard from. And, what’s it all about? Absolutely nothing. Sea level has been slowly rising for 400 years and the following chart from the DRBC shows there’s no unanimity as to projections for the future: 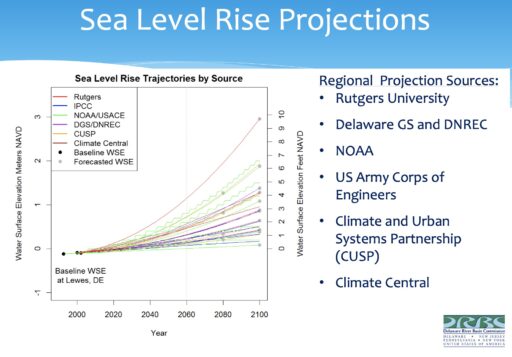 Moreover, here’s what we find on one of the DRBC’s presentation slides:

The basin has experienced more severe droughts and floods than those seen in the past 50 years.

What’s that? Things have been worse? Then, what, in the name of God, is the point of the committee? There is no point beyond patronizing the politically correct, rewarding special interests and grabbing more power for the DRBC.

One of my favorite blogs, PowerLine, asks and answers:

In polite society, we are required to pretend that the Earth faces an existential crisis because of increasing levels of atmospheric CO2; that global warming will destroy the planet, that the oceans will rise and storms will batter the sea coasts; that fossil fuels are the devil’s spawn, and in a short time–by 2050, say–all civilized societies will have banned their use, and we will be living in a solar- and wind-powered Nirvana.

But does anyone over the age of 16 actually believe this nonsense? I doubt it. A case in point is Saudi Arabia’s sale of five percent of Aramco, the world’s largest oil company. The London Times reports:

“Saudi Aramco has become the world’s first $2 trillion company as shares in the oil giant rose again on its second day of trading.”

…the point is obvious: if investors seriously believed that the world is going to abandon fossil fuels, starting now and concluding circa 2050 (or whatever), they wouldn’t be interested in paying top dollar for Aramco shares. Or, perhaps, paying much of anything…

Commitments aside, the U.S. has actually reduced its CO2 emissions more than any other country, as a result of fracking. But the point is that investors don’t seem to take the world’s “commitments” seriously.

Liberals pay lip service to global warming dogma, but they apparently don’t believe it, as they continue to live large, emitting massive quantities of CO2. Al Gore is a classic example, but his hypocrisy is the rule, not the exception. Greta Thunberg is similar, burning up vast quantities of fossil fuels as she travels around the world (by yacht, while multiple handlers fly) preaching the global warming dogma.

Another data point similar to the Aramco IPO is the price of coastal properties. Liberals allege that sea level is rising alarmingly–it isn’t, in fact–and you likely have seen images of the Statue of Liberty half-way under water.

If people actually believed these claims, prices of coastal properties would be plummeting. But the opposite is happening. Buyers apparently have no fear that their coastal homes and businesses will soon be under water, or that a decade or two from now global warming theory will have been confirmed so that they won’t be able to sell their properties. Thus, we saw Barack and Michelle Obama pay $15 million for an estate on Martha’s Vineyard, just feet above sea level. Do as I say, not as I do.

In short, liberals have browbeaten most people into pretending to believe in their unscientific global warming ideology. But, as the crude adage holds: Money talks, bulls**t walks. I will give the last word to today’s paper of record, the Babylon Bee: 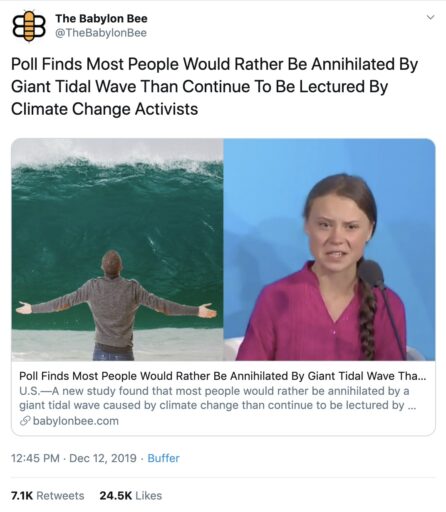 Love it! What a complete farce the whole Greta nonsense has been while natural gas just keeps allowing us to reduce the CO2 about which her enablers say they care so much, but don’t, of course.

And, New Yorkers Are Worried About Fracking?

A reader writes to say “I know how this seems unrelated but NYC homeless situation is a good example of ‘He who is without sin should cast the first stone.’ Our biggest antis came from the city while management and care for the homeless and low income population was deplorable.  It highlights the hypocrisy that they ‘care’ about the supposed health impacts of natural gas while horrible health impacts are happening in their own back yard because of a far more important issue.  Here is a report that shows the abuse and violence perpetuated against city citizens in the largest city shelter.”

The documents detail chaos — rules going unenforced amid violence, often perpetrated by repeat offenders — that some homeless people tell us drives them to the streets and subways.

Much more here in our special report.

As our reader further notes:

As we all know, shipping low income families on assistance out to the southern tier to save on rental expenses completely decimated the economies of the cities and counties as they were forced to contend with rising crime rates, need to raise taxes to cope with the rising financial burdens, lose of employment and businesses that closed or fled because of the crime and increased taxes, and declining housing stock and quality of life. 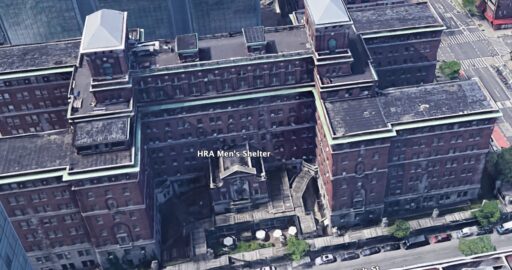 I feel there is a big disconnect that should be called out for what it is and that this is a wake-up call about the human and financial resources that have been wasted on trying to discredit natural gas development while this atrocity is going on.

Our friend Aaron Price offers some more insights into our natural gas and property rights dilemmas with another poem:

We walk away on empty,
We are rationed when we drive.
Someone put a number to “Yes”
And we pay for carbon’s goodbye.

We are tired. We are used.
We are worn and afraid.
Our chains are made of Green
And tyranny rules the day.

We are cold when we sleep,
We are hungry when we work.
There are things we can not keep
And things we do not deserve.

How much for a loaf of bread,
For some eggs and some milk?
Inflation now that Green wears Black
And prides itself on guilt. 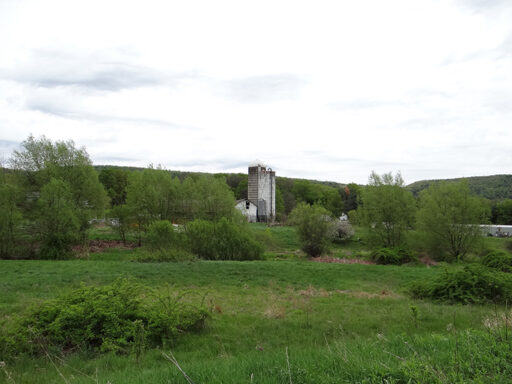 We are landowners.
We are vacant. We are empty.
We are foreclosed and forlorn.
Evicted from our future by Green,
We are picketed and scorned.

Green Tyranny was manufactured
In the hearts and minds of the young.
They learned they could make a difference
And the difference was:
Only for them would there be enough.

We are tired. We are used.
We are worn and afraid.
Our chains are made of Green
And tyranny rules the day.

Aaron captures some of the dystopia that is the fruit of all the utopian scheming by Greens.