You’re Saying It Makes No Sense, Then?

It doesn’t get much more clear than this; off-shore wind is idiotic:

Offshore wind is the renewable-energy industry’s shiny new toy. Led by New York, seven Atlantic-coast states have now imposed mandates to expand offshore wind use over the next decade, with the Empire State last week soliciting bids for an additional 2,500 megawatts of offshore power, on top of the 1,700 megawatts procured previously.

Advocates claim offshore wind will contribute to a low-carbon future, spur an economic renaissance and create thousands of jobs. Don’t buy it. The mandates are yet another boondoggle that will benefit a well-connected few, saddling everyone else with even higher power costs.

At the start, in 2016, the local utility paid $245 per megawatt-hour for the project’s electricity, with a guaranteed increase of 3.5 percent each year. In 2035, the last year of the contract, the price will be an eye-popping $470 per MWh. By contrast, the average price of wholesale electricity in New England last year was about $31/MWh. In New York, average prices ranged between $22 per MWh upstate to $51 per MWh in Gotham.

Elsewhere, the dozen offshore projects now under development have lower-priced contracts, but they are still far higher than market prices. In New York, the first-year prices for the 816 MW Empire Wind and 880 MW Sunrise Wind projects will be $99/MWh and $110/MWh, respectively. And that’s cheap compared to electricity from some other wind projects in the Atlantic, which range from $77.76/MWh to $202/MWh.

How long will ratepayers tolerate this foolishness before they accept natural gas as the cleanest and most economic source of energy?

LNG Exports Doing Well on Some Fronts Despite Everything!

These are pretty amazing natural gas stats, considering decreased demand and a glut of product:

However, although exports have been dropping throughout 2020 and individual projects have been impacted by rejections, U.S. exports and deliveries to Asia and Europe remain much higher than a year ago. 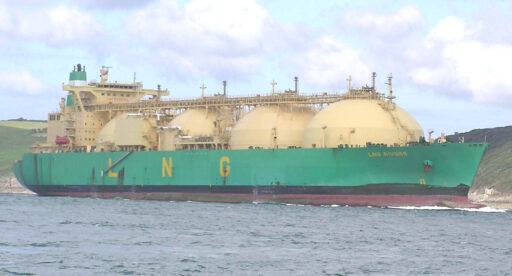 Analysts said massive production capacity supported U.S. LNG, with strong exports achievable when the price differential between the U.S. and other markets is wide enough.

“What we saw in the first half of the year…was primarily the result of newly expanded terminal capacity and low prices, wherein a spread still existed to Europe and Asia from the Gulf (of Mexico),” said Jack Weixel, Senior Director for gas, power and energy futures at IHS Markit.

The U.S. exported 26.5 million tonnes of LNG in January to July this year, a 41% jump on the year earlier period, Refinitiv Eikon data showed.

I don’t know William Allison—he came to EID long after I left—but I sure like the way he writes:

For fringe Democrats seeking to completely ban responsible oil and natural gas development in the United States, the most popular phrase of the 2020 campaign has been the “Just Transition.”

The purported idea of the plan is to transition workers in the fossil fuel industry into new jobs in the renewable sector without disruptive losses in employment and pay.

But it’s really all a myth.

Studies have shown that government retraining programs for workers haven’t been successful and that transitioning workers consistently go through spells of unemployment and often are forced to settle for lower pay in new jobs. Nonetheless, fringe Democrats and the “Keep It In The Ground” activists supporting them have made it a top priority to stop all oil and natural gas development and related infrastructure, regardless of the many workers likely to be hurt in the process.

The “just transition” myth has been exposed most notably by Rep. Alexandria Ocasio-Cortez (D-N.Y.) who introduced legislation to ban fracking nationwide and discussed the need for a “Just Transition” in her Green New Deal.

Yet, when the COVID-19 pandemic caused massive economic damage and sent the demand for oil, plummeting, Ocasio-Cortez delighted in the news, even though thousands of workers were losing their jobs. She tweeted, “You absolutely love to see it.” 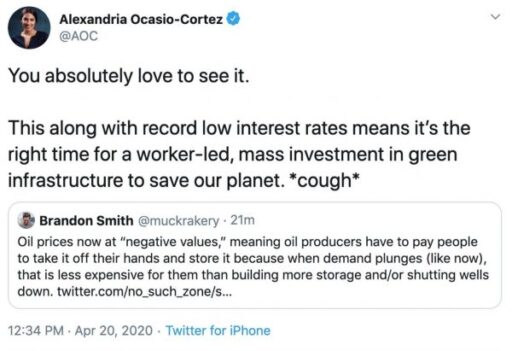 Ocasio-Cortez quickly deleted the tweet, but as Energy In Depth reported at the time, it wasn’t exactly a typo as  fringe House Democrats had just introduced legislation preventing any CARES Act funds from going to fossil fuel companies during the COVID-19 pandemic. That bill didn’t even pretend to care about a “Just Transition.” Rather, the bill aimed to eliminate as many oil and natural gas jobs immediately as possible with absolutely no safety net for the workers.

This is how to fight, a phrase I find myself using more frequently recently, which is a reason for optimism! It means we’re on the offense and exposing brats such as AOC for who they are.