Josh Fox hates us. Michael Moore hates us. But, Michael Moore is smart enough to recognize a fraud when he sees it and has done a movie about green eggs and scam called “Planet of the Humans.” We covered it here, in fact. If you watch, go straight to 22:10 to enjoy. But, Fox, who lives off money from the Park Foundation, tobacco heirs and the Rockefeller family and others invested in these scams, is screaming foul and claiming Moore is using “fossil fuel talking points.” That’s like accusing your brother of stealing your wife in the world of normal folks, so get out a beer, sit back and enjoy: 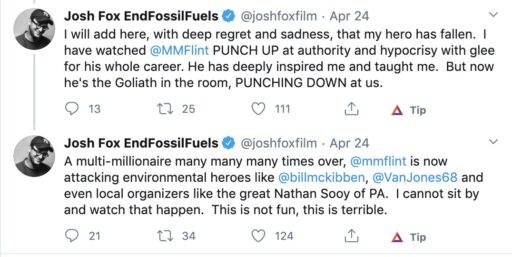 Check out the whole thread and how Fox worked with McKibben and other shills for the gentry class to kill the film’s distribution. Enjoy the whole fracas; hair pulling, mud wrestling and all.

Folks, there’s something you need to understand, “Green Energy” is a scam, it’s always been a scam.

The environmental impact of just ONE Rare Earth mine (the materials needed to make the batteries and magnets for all of the windmills, the batteries for your “green electric car” and solar cells, as well as pretty much every electronic device you own) is worse than every oil well in the US combined. 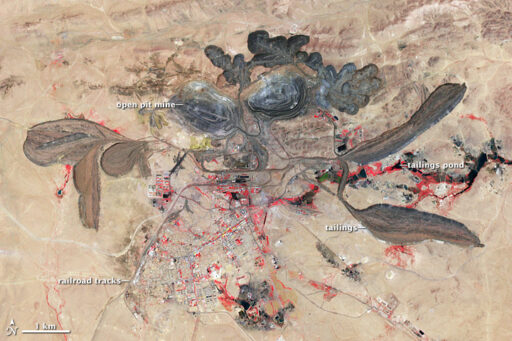 That’s not even counting the refining of those same materials. The “rare earths” are toxic as Hades to start with and the chemicals used to refine them are worse, and most of the mining and refining takes place in Third-World hell holes, or China — neither one of which gives two thoughts to environmental impact…

Driving your cute electric car? Yeah, you’re just out-sourcing your pollution to something even dirtier than gasoline. (And modern emissions systems are so good that 99 percent-ish of the emissions are nothing but water vapor, not carbon dioxide.) Drive it if it makes you feel better, but that’s literally all it’s doing for the environment — making you feel better.

Don’t get me started on the government programs that pay enviro groups to sue the government with taxpayer dollars to shut down anything they decide is verbotten this hour.

Like your wind farms? Think they’re going to save the planet? Probably not, but fine, whatevs. But the Kansas Sierra Club opposes them because — I kid you not — of their impact on the Lesser Prairie Chicken…

Look, no one wants a dirty environment. No one wants unsafe water or filthy air…

The problem is, so-called green energy, just isn’t. It’s a pipe dream for those who don’t know better, and a path to money and power for those who do — and are unscrupulous enough to take advantage.

RGGI Will Be A Raid on Ratepayers and Taxpayers

Tom Wolf, as he’s busy destroying Pennsylvania’s economy, is also fighting to make it permanent by entering the Commonwealth into RGGI.

Because natural gas firing has much lower CO2 per MWhr emission rates the total CO2 mass went down 41% from my baseline to 2018.  Because fuel prices are the primary driver of unit operations and because the RGGI allowance price was relatively small in comparison to the fuel price differential of natural gas relative to coal and oil I conclude that the primary driver of RGGI region CO2 emission reductions was fuel switching not RGGI… 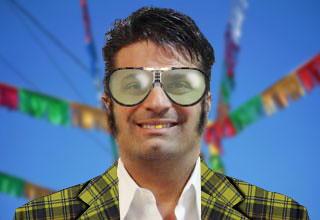 RGGI? You bet we have one and it’s such a deal!! You’re going to absolutely love it!! Illustration: “bmw_guy” by bonkedproducer is licensed under CC BY-NC-SA 2.0

By RGGI’s own numbers, despite the apparent value of the energy efficiency investments, the fact is that as a CO2 control program the results are expensive, far exceeding any regulatory social cost of carbon value.  If society is to depend upon RGGI investments as the control program to drive emissions reductions on the order of the Green New Deal then enormous costs are inevitable.

But Tom Wolf says this is the way to go as he once again apes Andrew Cuomo. The Northeast is cursed with the worst leaders.

Landowners, It’s Time to Be Men

And, Aaron Price, our poet laureate here at Natural Gas NOW sums it up for this week with this:

Landowners, you are not a mask,
But a man.
Not an absentee ballot
But a vote.

Landowners in this State
Do not own the land
Because no one does;
Not if you and the
Other landowners like you
Can be ordered what to do
And not to do.
So, landowners,
What is your land to you?

And what are you, my friends?
Your love or your debts?
Your ills, or the will to meet
The ones you haven’t met?

The day we all wear masks
And we’re not nurses or doctors
Of first responders
Then I know this nation
Has lost its soul.

What is your life worth?
The better times were here first.
What do you think
This nation really needs?
I think I know.
The freedom
Freedom promises the free.