Natural gas from the Marcellus and Utica Shale regions is now making its way west to places such as Indianapolis where it is serves to fuel new power plants.

Seems like a day doesn’t go by that we don’t notice yet another natural gas-fired electric plant project has been announced, or in this case, has come online! Here’s a project not previously on our radar. Indianapolis Power & Light (IPL) built and recently brought online a 671-megawatt combined-cycle natural gas-fired electric plant about 30 miles southwest of downtown Indianapolis. The new plant can power up to 370,000 homes. Gas-fired plants are a huge market for Marcellus and Utica Shale gas.

“But Jim,” you say. “This plant is in Indiana! There’s no Marcellus/Utica gas in Indiana. In fact, Rover, NEXUS and other pipelines don’t go through Indiana, so why are you excited about this plant?” Good question.

We’re excited because there are pipelines in the vicinity that flow our gas–including the mighty Rockies Express (REX), which was reversed in June 2014 and now flows our gas all the way to points in Missouri. According to a statement issued by IPL, the new Eagle Valley gas-fired plant can access “low-cost fuel” from the Rockies Express Pipeline and Texas Gas interstate pipelines. That is, our Marcellus and Utica Shale gas.

“Our future is focused on accelerating cleaner, smarter and affordable options for our customers and we are proud of the efforts we’ve made over the last few years to significantly reduce our dependence on coal and focus toward a more balanced energy mix,” Craig Jackson, IPL president and CEO, said in a statement. IPL is a subsidiary of Arlington, Virginia-based AES. 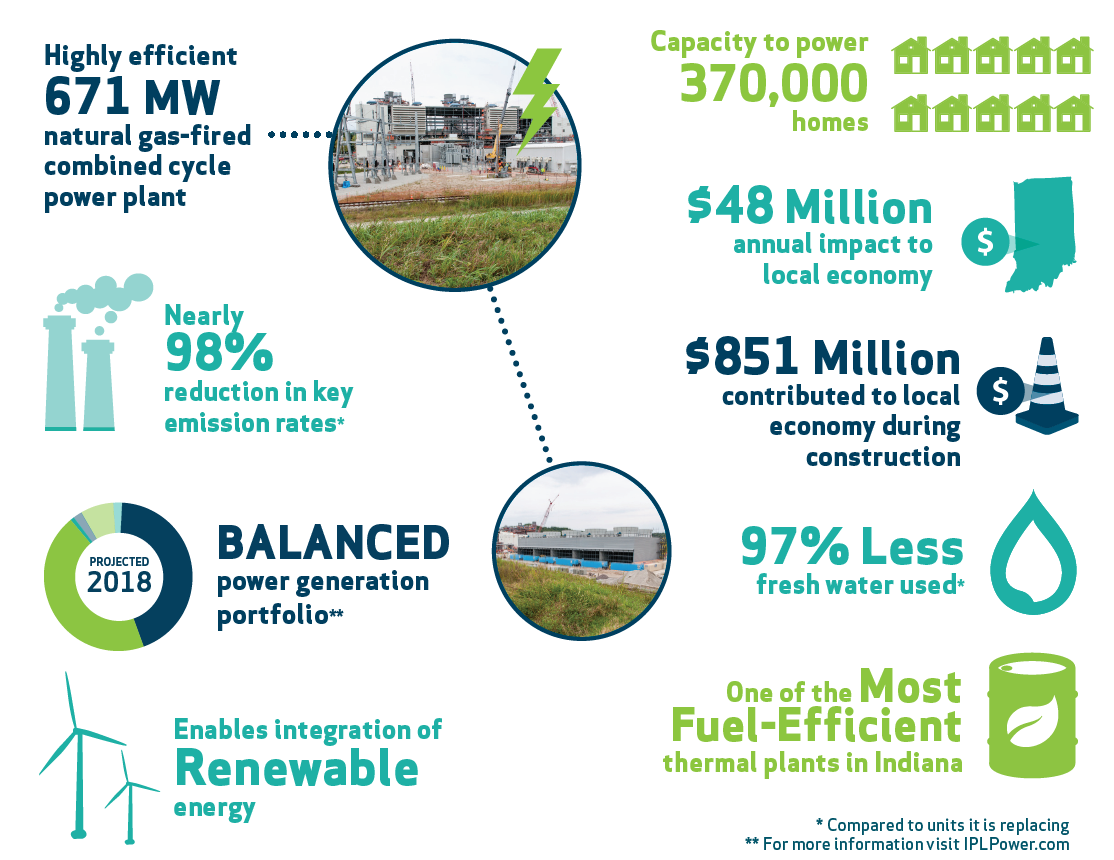 The 671 MW CCGT gas plant, about 30 miles southwest of downtown Indianapolis, began commercial operation April 28, IPL said. The new power station reduces the rate of “most emissions” by 98% compared to the six coal- and oil-fired units it replaced at the site. The old generating equipment and water intake structures were “rendered inoperable” for safety reasons, Claire Dalton, IPL spokeswoman, said in an email Monday.

Eagle Valley will sell power into the Midcontinent Independent System Operator’s wholesale energy and capacity markets. IPL’s request to invest more than $600 million in the plant was approved by the Indiana Utility Regulatory Commission in 2014, and the company has a pending regulatory rate review at the IURC to place the Eagle Valley plant into the rate base, Dalton said. The gas plant can access “low-cost fuel” from the Rockies Express Pipeline and Texas Gas interstate pipelines, the statement said.

“This is an important investment for our customers and community as the plant will have a lower rate of emissions than the coal units it replaces, and is the most reasonable cost option for our customers,” said Craig Jackson, IPL President and CEO. “Our future is focused on accelerating cleaner, smarter and affordable options for our customers and we are proud of the efforts we’ve made over the last few years to significantly reduce our dependence on coal and focus toward a more balanced energy mix.”

The new natural gas plant is one of the cleanest, most efficient thermal power plants to be built in Indiana. Additionally, it reduces the rate of key emissions by 98 percent compared to the six coal- and oil-fired units it replaced. Connected to two interstate natural gas pipelines, IPL’s natural gas plant can access low-cost fuel from most of the major natural-gas producing basins in the United States.

IPL will host a ribbon cutting ceremony in the coming months to celebrate the commissioning. For more information about the benefits of IPL’s new natural gas plant, visit IPLpower.com/CCGT.

And, here’s a nice video on the project: