Natural gas is a frequent target of junk science but it’s wind and other trendy solutions that ought to get attention because they don’t make economic sense.  Real solutions are to be found in developing our natural gas resources.

Lately, with more and more data coming on line debunking the Great Bubbling-Up Toxic Fracking Menace and the truth about methane migration (occasional and linked primarily to faulty well casings or surface spills), the scaremongers among the antis have turned to the more amorphous bugaboo of global warming. Striped to its essentials, their argument is as follows: gas drilling, by way of fugitive emissions of methane in production and transmission, contributes to global warming. Therefore, ban drilling. A corollary follows: there is a higher path to reduced greenhouse gases — renewables. Take the higher path.

Well, not yet. And not for a long time yet if you live in Realville. Follow me on this one.

The 2011 Intergovernmental Panel on Climate Change (IPCC) report on the future of renewable energy shows renewables (solar hydro, wind, tidal, wave, geothermal, and biomass) account for 13.8% of the world’s total energy output used in transport, heat, and electrical power. However, that number is deceptive since the bulk (10.2%) comes from biomass, mostly wood and dung used for cooking. The remaining 2.6% of worldwide renewable energy is mainly hydro. Less than one half of one percent (0.5%) of the world’s total energy output comes from wind, wave, tide, solar, and geothermal combined, the renewables touted by green energy advocates. (Source: Matt Ridley, “Inconvenient Truth About ‘Renewable’ Energy,” WSJ, May 21,2011).

Wind seems the most feasible of these renewable energy sources (0.2% worldwide), so let’s consider wind.

Big Wind takes a lot of room. Turbines used to produce 1,000 megawatts (1 billion watts) – the annual power demand of a city of 70,000 — need 300 square miles of space. Conventional power plants of similar capacity, on the other hand, use less than a square mile. Wind is best situated where it is least needed — on the windy plateaus and sparsely populated areas of the world. In population centers, Big Wind’s space requirements pose a big problem.

Big Wind needs Big Money. Not only do you have to build a lot of these gigantic lawn ornaments but you also have to re-tool the electric grid to account for wind’s variability. Reason: the grid needs stability. Wind doesn‘t blow steadily. When it blows, it blows at different speeds. Too much wind — operators shut down. This variability necessitates back-up.

In 2011, California needed 400 megawatts per minute of instantaneous power to insure stability according to Jim Detmers, the former head of California Independent Systems Operator (CAISO). If even technically feasible, batteries for such instant power would have been cost prohibitive. More recently Germany solved the stability problem by operating coal burning plants simultaneously with wind. The dual system caused sky rocketing electric bills — and dirty air.

Unable to compete, wind literally passes the buck to the consumer who pays more and to the tax payer, you and me, who underwrite the subsidies, mandates, and tax credits.

Finally, if you want to see the good people of New York shoulder the pitchforks and pick up the torches, suggest a wind farm in their neighborhood. Nothing like a few miles of concrete pylons and a little white noise to bring a community together. Lots of luck on that one in New York.  Here’s a typical New York State protest on that subject and this comes from upstate where folks are more likely to be accepting of development.  Try it in on Long Island. 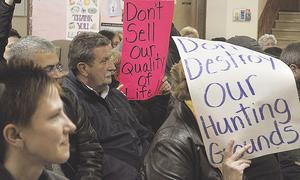 And, here’s one from nearby Massachusetts: 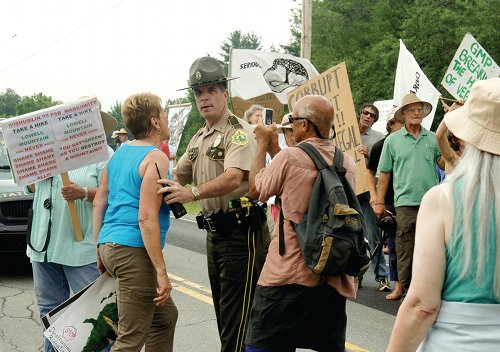 So, scared by junk science that doesn’t factor in reality and conned by Dr. Feelgood solutions that don’t work technically, economically, or socially, what do you do?

Recently, the International Energy Agency reported that while CO2 emissions worldwide rose 1.4% last year, emissions in the US dropped 3.8% to the lowest level in 20 years. The primary reason was the switch by electric companies from coal to natural gas. In Realville, if greens were truly interested in results rather than ideology, they would concordantly support gas and continued research in green technology. We need that research to move renewables from potential to reality. And we need it without breaking the bank (ie. The Treasury) to pay crony capitalists.

China has enormous pollution problems. It also has enormous reserves of shale gas, almost twice those of the United States (EIA, June10,2013). Currently they are learning our technologies by partnering with western corporations in joint ventures. Imagine the worldwide benefits as China and other nations shift energy generation from coal to gas!

When people break through the bunkum and hyperbole that they’ve been fed for the last five years; when cheap, abundant, domestic gas flows into and out of our communities; when the conversation changes from the prevention to supervision; we’ll all be better off.

One thought on “Natural Gas Is the Answer in Realville”