Natural gas industry jobs are helping to save the US economy and move it forward at a time when so much has been sitting still.

A terrific article appeared at DrillingInfo.com a few days ago, laying out the tremendous job opportunities in the oil and gas industry. Written by Nathan Randazzo, it’s titled Oil and Gas Jobs in Demand as Companies Seek to Bridge Skills Gap and illustrates just how much of a standout the industry is in this floundering national economy. It is the one consistently bright spot in the world of jobs. Natural gas industry jobs related to the shale revolution are one of the reasons.

Randazzo’s story provides the setting for what’s happening. Here are some key excerpts:

In just five years, the shale oil and gas boom has increased oil production in the U.S. by approximately 64 percent. As a result, oil and gas now supports almost 10 million workers, and employment growth in the industry is greatly outpacing job creation in other sectors.

In fact, direct job growth in the oil and gas industry has risen by 40 percent since the beginning of the recession in late 2007. Meanwhile, the overall U.S. economy witnessed an employment decline of roughly 3 percent between 2007 and 2013.

…an estimated 71 percent of the workforce in oil and gas is 50 years of age or older according to an IPAA survey. Furthermore, a survey conducted by Oil & Gas IQ found that roughly 50 percent of all geophysicist and engineers in the oil and gas industry will retire by 2018.

As a result, recruiters and companies associated with oil and gas development are working with high schools and universities throughout the U.S. to attract young professionals to the industry, and are investing in training programs – a high-stakes process that is commonly referred to as “the great crew change.”

Today, the industry supports an estimated 9.8 million oil and gas jobs through various operations and capital investments. These jobs account for approximately $597.6 billion in wages, salaries, benefits and proprietors’ income, and added roughly $1.2 trillion to the U.S. economy.

Although the industry is already the top job creating sector in the U.S., it also offers Americans higher wages and salaries compared to other industries.

For example, the average domestic salary for exploration and production jobs is an estimated $96,844, more than double the average salary for other U.S. occupations outside of the oil and gas industry…

In the first quarter of 2013, women filled roughly 46 percent of the 3,900 newly created oil and gas jobs. Furthermore, there were approximately 33,900 female employees in the oil and gas workforce in June, according to the Bureau of Labor Statistics.

The documentation Randazzo offers for this excellent article matches up with what we see in Pennsylvania. The Commonwealth’s Department of Labor and Industry assembles the data on a regularly basis at a site called Marcellus Shale Fast Facts. There you can download the latest data from gathered from Pennsylvania’s Quarterly Census of Employment and Wages, which indicates the following for August, 2014: 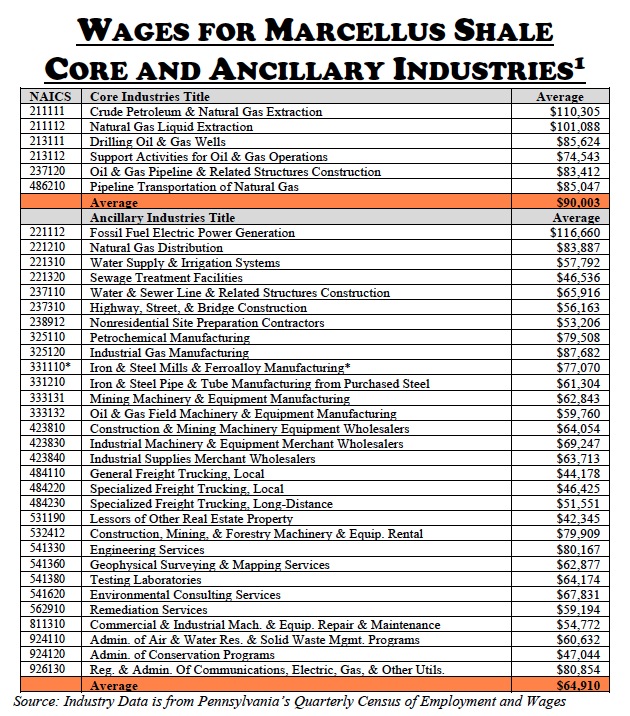 The report also notes the average wage across all industries in Pennsylvania over the last four quarters was $49,070, while the average wage in the Marcellus Shale core industries was $90,003 or $40,933 higher. That’s an 83% premium. The average wage  in the ancillary industries was $15,840 or 32% higher. Moreover, this includes none of the data related to other indirect and induced wages at title companies, rental businesses, restaurants, hotels and the like that aren’t normally associated with natural gas industry jobs. It’s nothing less than remarkable.

The US Bureau of Labor Statistics (BLS) provides further insights with its projections of job demands between 2012 and 2022. Here is are some the jobs expected to be in demand, excerpted from the BLS data:

The data is simply overwhelming. Natural gas industry jobs are among the best there are and they’re available to everyone, regardless of education, with exceptional opportunities for those with Bachelor’s degrees. This is an industry that’s sustained our economy during the bad times. Just imagine what it can be.