The natural gas impact tax has shared the tremendous rewards of responsible energy development with all Pennsylvanians and lifted the state economy.

While New York Gov. Andrew Cuomo continues to handicap his beloved New York City by ensuring that not enough natural gas can be provided to tax-paying, business-owning Americans, elected officials on Friday celebrated over a decade of economic success thanks to natural gas, as well as seven years of the impact tax. 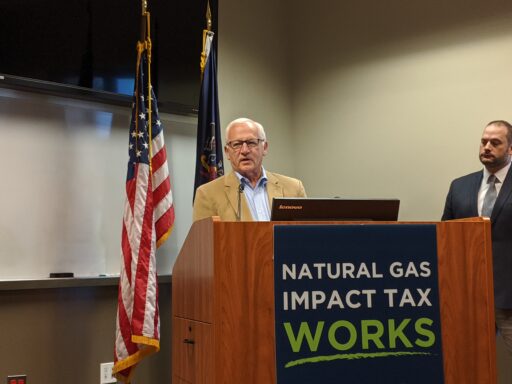 Sure, Friday’s conference highlighting the $1.7 billion generated by the impact tax (also known as the impact fee or Act 13), more than $1 billion of which has gone to support community initiatives and another half-billion has aided statewide infrastructure projects, had nothing to do with New York or Cuomo. But it’s rather difficult for me to look at Pennsylvania’s success with natural gas and not look across the border to the state-imposed energy shortage once thought unfathomable in modern day America that would likely become commonplace in a socialistic, Green New Deal-inspired “utopia.”

But I digress, and Friday’s conference of Pennsylvania commissioners, senators and state representatives at the Wyoming County Emergency Operations Center in Tunkhannock was not intended as a collective indictment of New York’s leadership, but as a celebration of success.

Wyoming County Commissioner Tom Henry said the county’s expansions at the center would not have been possible without the impact fee. Additionally, he stated that the county is moving forward with phase one of a project that would provide natural gas service to the county’s 911 center, jail and courthouse.

“We would be lost without the impact fee,” Henry said. “There’s been new businesses and shops all over the county, and it’s just been a real win-win.” 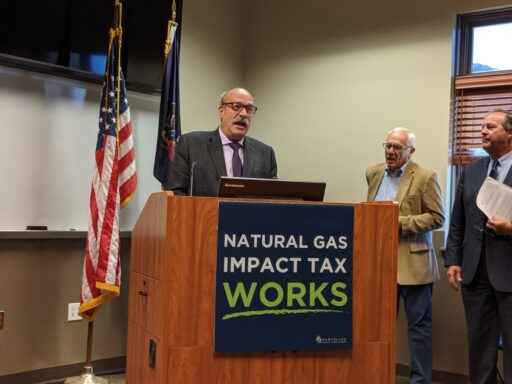 “Townships and boroughs have gotten $69 million since the impact fee was enacted,” he said. “They’ve been able to buy equipment, improve roads and upgrade facilities. The county has gotten $42 million, and with that we’ve been able to renovate facilities, reduce taxes and fully fund our pension system, which had been running in the red every year before the impact fee came along.”

State Rep. Jonathan Fritz encouraged his fellow lawmakers to not let the impact tax become a severance tax and enter the “black hole” of Harrisburg.

“We need to roll out the red carpet and encourage business to come here, not discourage them with red tape,” he said. “There’s been a shift in power generation in Pennsylvania, and our CO2 emissions are down 29 percent since 2005. We have found that elusive balance, and Pennsylvania is getting the job done. We need t push back against the policy changes that would hurt that, and the silent majority needs to stand up against bad policy.”

However, not all of the speakers could share in the success stories of the impact fee, a point that Wayne County Commissioner Brian Smith made exceedingly clear.

His county has been in the midst of a gas development moratorium mandated by the DRBC (Delaware River Basin Commission) for years now, strangling the county economically in the name of politics.

“We have no production wells in Wayne County,” he said. “Energy makes a strong economy, which makes a strong nation. People came to this state for jobs. They came here for a better way of life. Now we’ve gotten some impact fees, about $85,000 worth. And we were able to take $55,000 of that and leverage it as seed money to obtain grants, and we turned that money into $1.3 million. This is incredibly important for our local economies.”

Smith was quite livid, and who could blame him. I’m sure he, like all of us, thought Wayne County was a part of Pennsylvania, not New York, and thus could enjoy the maximum benefits from the natural gas industry. Now, don’t get me wrong. I fully commend him and his fellow county officials for leveraging what they’ve gotten and maximizing it to benefit the county. But there’s a lot more being left on the table due to petty politics.

State Sen. Gene Yaw acknowledged the frustration from Smith, and said he would continue the fight as well as he helps see through a lawsuit against the DRBC.

“I think it’s egregious – what they’re doing,” he said. “And you can see it’s clearly not controlled by people who are from Pennsylvania.”

Yaw also touched on his PIPE program, a natural infrastructure initiative funded by unused monies from an abandoned environmental program.

“Fifty percent of Pennsylvanians don’t have access to natural gas,” he said. “As one of the biggest natural gas producers in the world, I think that’s unacceptable.”

Yaw also recalled when the gas industry first came into the state over 10 years ago, and compared it to when Amazon was considering setting up shop in the state.

“The natural gas industry never asked for anything,” he explained. “When Amazon was looking to open up in Philadelphia or Pittsburgh, there was something like billions offered in tax breaks. We don’t know the specifics of the negotiations between Amazon the governor (Tom Wolf) however. We weren’t really privy to the details. But the point is the gas industry never asked for a damn thing. And the only thing we gave them was a hard time, in some respects. Is it perfect? Of course not, but the industry has worked out extremely well for our state.”

Yaw went on to make the point that the impact fee is also an efficient way for governmental funding to operate.

“Municipalities and counties don’t have to jump through the hoops that they typically would for grant funding,” he said. “No. With the impact fee, the numbers are run through a formula, calculated by the Public Utility Commission and the checks are cut. It’s an amazing way for government to work, at least in my opinion.” 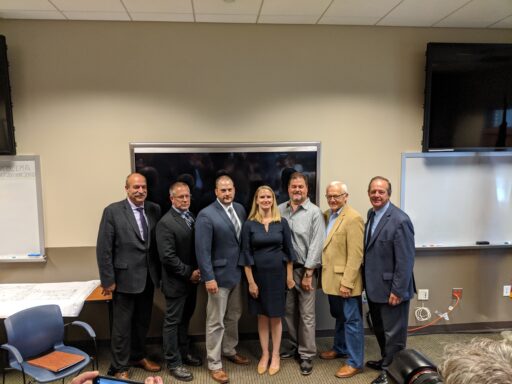 “This is really a celebration of a decade of development,” he said. “Ten years ago, we as a nation were 60 percent dependent on foreign oil, and also very dependent on foreign gas. Today, Pennsylvania alone produces 20 percent of our natural gas. And that growth has led to all of these projects for local economies and small communities, and I’m proud to see how all of these elected officials have invested into their communities to sustain that growth.”