Yesterday, I reported on the first part the Platts Global Energy Outlook Forum, a panel discussion among some high-powered folks regarding the direct of energy development in this country. There were several things that got my attention, including the potential for resident co-gen units that use natural gas to generate electricity and balance out renewables such as geothermal and solar energy, complementing each other nicely.  There was a lot more, however, including some words from our new wild-haired Secretary of Energy, Dr. Ernest Moniz.

Dr. Moniz, as we have written a number of times before, is a smart guy. Like Albert Einstein smart. And, interestingly, he has hair kind of like Einstein! We affectionately call Dr. Moniz “Hair” (see picture below). Dr. Moniz was there to push the Obama Climate Action Plan (CAP), released this past June. Moniz said, “We have the authorization to implement it, and we are.” He then focused his remarks on climate change and the “three pillars” of the Obama plan to deal with it. 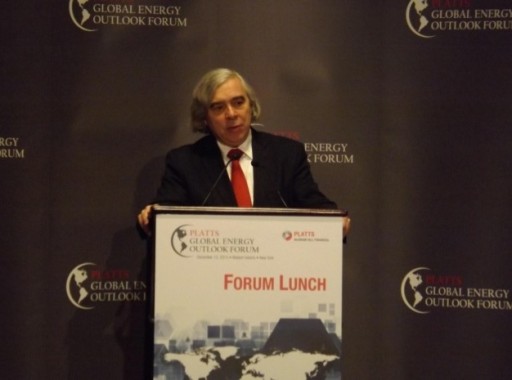 Those three pillars are: (1) mitigation, (2) adaptation (to the so-called impacts already here); and (3) international cooperation. Moniz offered specifics for each point along with a partial apologetic and generally “sticking up” for Obama’s embracing of shale gas (for now anyway). He said his speech would focus on the mitigation portion of the three pillars.

Dr. Moniz kicked off his comments by saying the critical point of CAP is the president’s statement that he embraces an “all of the above” approach to energy. At the same time, Obama (and Moniz) are true global warming believers. They are “committed” to a low carbon future–but that low carbon future includes fossil fuels, and no, that’s not a misstatement according to Moniz. He believes fossil fuels have an important role to play in getting us from here (high carbon) to there (low carbon). Moniz said that there is no one low carbon solution, no panacea and that it is critical to support all of these sources, including fossil fuels.

As part of their effort at innovating and achieving a low carbon future, Moniz said just that morning he announced a new $8 billion loan guarantee program. The new program is specifically targeted at investing in new fossil energy projects that lower emissions. The new $8B program is in addition to the already up and running $6B program for clean coal technology. Our tax money at work (try not to cry).

Offered as proof of Obama’s creds on using fossil fuels, Moniz pointed out that in 2005-2008 the average daily oil production in the U.S. was 5 million barrels per day. Now? It’s 8 mbpd. The implication was that oil production had grown because of the Obama administration–which of course is not true. It’s grown because of shale energy and Obama has had nothing to do with that other than not screwing it up with massive federal regulations.

Moniz said Obama remains committed to lessening our dependence on foreign oil (and oil in general) by taking actions like implementing tough new CAFE standards which require vehicles to achieve 55 miles per gallon by 2025. Imagine that–just wave the magic government wand and “poof!” Vehicles will achieve super efficiency in the next dozen years. We would point out this kind of nonsense–government decrees that science catch up to government desires–has been going on for more than 30 years (perhaps longer). But we digress.

Moniz said that electric vehicle costs have come down 60% in the last five years and continue to decrease due to better batteries. He also said next generation bio fuels are on the way to help lessen our dependence on oil.

Natural gas got some Moniz love too. He pointed out the US is now the world’s number one natural gas producer. He gave a shout-out to the Marcellus Shale pointing out it had achieved 13 billion cubic feet of production per day in December. It was just 2 Bcf/d a few short years ago–in 2010.

Moniz paid respect to nuclear power, saying it’s “part of the zero carbon solution” and that nuclear energy produces “the most carbon-free electricity in the U.S.”

Renewables got a brief mention. Moniz said wind power was the biggest source of new energy power added to the grid in 2012 and that solar (photo voltaic) was “way up” in the third quarter of 2013. In 2009, according to Moniz, there were no “utility scale” solar projects in existence. Now? There are 10 such projects.

Moniz closed his comments by anticipating criticism for the new $8B loan program he announced. He positioned it this way: The Dept. of Energy has a $33 billion “portfolio” of loan guarantees. Inevitably, when you offer guarantees for projects that are sometimes on the cutting edge, there are failures. He didn’t specifically mention the $535 million Solyndra default, but that was certainly the unstated subtext of his remarks. Readers can make their own judgments.

The final session of the day featured Chris Faulkner of Breitling Oil and Gas as moderator chatting with Charif Souki, CEO of Cheniere Energy and with Adam Sieminski, Administrator of the US Energy Information Administration (EIA). Adam Sieminski is as close to a “rock star” in the energy industry as you can find, in our humble opinion. The EIA is the one government agency that works and works well.

Right away, the discussion turned to the new Drilling Productivity Report (DPR), a monthly report issued by the EIA that we have gushed about for months now. We are total EIA fans at MDN. So hearing Sieminski talk about the DPR was geek heaven for us. Here’s an example of one of the charts EIA puts out: 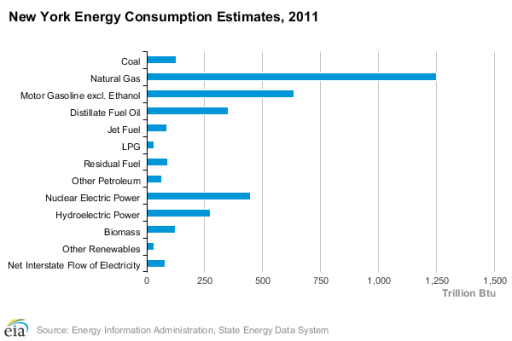 Sieminski gave the rationale for why they developed and now publish the DPR. Prior to the DPR the EIA relied on data that was 6-12 months old when publishing their Annual Energy Outlook. The new DPR gives them up to the minute data to make the Annual Energy Outlook much more accurate in its predictions. Sieminski said the DPR answers the question; Is what we’re doing in the U.S. sustainable? It does so by using hard data on decline rates and overall production. According to Sieminski the data shows the shale revolution is indeed sustainable and will be producing for years to come.

In a sort of “inside baseball” explanation, Sieminski said you have to look at the tail end of decline curves when it comes to shale well productivity. A well will produce a lot at first, then rapidly decline. But even during its decline it produces something, and single wells continue producing something (a small amount) for 10-20 years. Because of the large number of wells drilled, if you add all of the “long tail” production together going out over 10-20 years and longer, you end up with a very sustainable production curve for decades to come. Sieminski said the EIA sees “no peak in shale gas” for the foreseeable future. It will just continue to climb. He also said we’re in the very early stages of understanding the shale oil boom now under way.

Cheniere Energy CEO Charif Souki had kind words for Sieminski and the EIA, saying “Adam’s data is unbiased, it allows us to make decisions.” He also made a statement we absolutely loved. Souki said he doesn’t want any favors or subsidies from the government. He’s full in favor of letting the free market determine energy winners and energy losers. He said, “I’m a free trader at heart.” Three cheers for Cheniere and Souki!

Some factoids from both Sieminski and Souki:

Perhaps the most striking statistic of all was offered by Souki. He said in the US we spend a collective $150-$200 billion per year drilling new wells, but we’re only spending $15 billion per year on the midstream–to connect all of that new drilling to the market. He believes the best investment for the foreseeable future is in the midstream, which will see rapid growth. He said, “Where else can you invest in a company that has a 20-year contract with a solid counter-party?” It’s about as sure a thing as you can find in investing.

It appears shale gas and shale oil are delivering quite a future indeed! Bring it in–enough with the peak oil silliness.

One thought on “Our Natural Gas Future – Part II”