Two stories came to my attention yesterday that illustrate natural gas energy is our future. The first is an article from the International Energy Agency (IEA) reporting on the successful electrifying of the world and especially of its poorest corners. The second is a post about a new turbine now being tested on a commercial scale. It promises to revolutionize electricity production in a thoroughly practical way. Together, they paint a picture of a world lifted from poverty; a beautiful world made possible by natural gas energy. 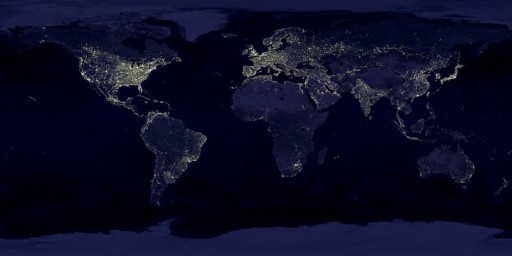 Lights of Earth at night

The IEA article hails the fact world population without access to electricity has fallen below 1 billion people. This is a remarkable achievement. It has been made possible, in part, by new our fracking, our LNG and new natural gas power plants but it’s not just electricity benefits that natural gas is delivering:

In a sign of great progress, over 120 million people worldwide gained access to electricity in 2017. This means that for the first time ever, the total number of people without access fell below 1 billion according to new data from World Energy Outlook 2018.

In particular, one of the greatest success stories in access to energy in 2018 was India completing the electrification of all of its villages. Many other Asian countries have also seen significant progress. In Indonesia, the electrification rate is almost at 95%, up from 50% in 2000. In Bangladesh, electricity now reaches 80% of the population, up from 20% in 2000…

Updated data from the World Health Organization and the IEA’s Energy Data Centre also show that the number of people without access to clean cooking facilities has begun to gradually decline, in part due to an increased reliance on liquefied petroleum gas (LPG) and on improved biomass cookstoves. This is very welcome news, as it will result in fewer premature deaths related to household air pollution.

Efforts have resulted in progress being made worldwide. For example, China’s natural gas infrastructure development is helping to reduce the use of biomass and kerosene. This has resulted in 15% fewer people without clean cooking access compared to 2010. In India, 50 million free LPG stoves and initial refills have been provided to poor households via the high-profile Pradhan Mantri Ujjwala Yojana scheme since 2015, and the government has set a target of providing LPG connections to 80 million households by 2020. In Sudan, around half of the urban population now uses domestically refined LPG for cooking. In Cameroon, where LPG penetration rates reach 21%, the government has published the region’s first “master plan” to increase the share of households using LPG to 58% by 2030. Finally in Kenya, LPG is now used by 24% of urban households.

Natural gas and LPG (a derivative) are, we see, heating and lighting the poorest areas of the world. This progress will continue, thanks to the shale revolution and we’ll be part of it.

But there’s more. Another article at Energy Matters details the future possibilities with the story of a new turbine that will make natural gas power plants even more efficient than they now are. It employs something called the “Brayton cycle.” Here are a few excerpts:

The Brayton cycle uses what we might call a gas turbine. It operates solely within the gas phase. The reason the Brayton cycle is more efficient is it lacks the phase change of liquid water to steam which ultimately robs some of your energy output.

For the Brayton cycle, the density of your working gas makes a big difference in your energy output. Supercritical fluids (gases heated and compressed until they behave like liquids) are much easier to compress….because of that the amount of work done during the compression phase is reduced; and the energy saved there greatly contributes to the turbine’s overall efficiency…

The carbon dioxide is recycled – and since we are no longer making steam, our water usage goes down tremendously (80-90%). Water use for energy production accounted for 583 billion cubic meters – 15% of the world’s water withdrawals. In the U.S. over 40% of all freshwater withdrawals are for thermal power generation. Seems to me freeing up this much water for other uses, especially in dryer areas, might be very welcome….

Did I mention they are theoretically cheap and relatively easy to install? You don’t have to build a whole new power plant, just retrofit whatever you already have. Heck, you can do it while the old plant is still operating, and just redirect the boilers into the new circuit when you are ready. You don’t need a lot of extra space.

Up until recently this was pie in the sky stuff. But the Supercritical Transformational Electric Power (STEP) pilot plant at the 15-acre facility at Southwest Research Institute’s (SwRI’s) San Antonio, Texas, campus, broke ground for construction on October 15, 2018. They are aiming to run a utility sized SCCD turbine system to make sure it works as promised at that scale. The test is supported by the DOE, and 20 utility and manufacturing companies…

Testing will be complete by 2022. Assuming everything works as expected (it has already been proven at a smaller scale), maybe 2025-2030 these things will start rolling off the assembly line…

This is a once in a generation energy transformation. Next to LEDs and fracking, this is one of the most important energy developments in decades. It is coming at us like a freight train, and almost no one in the general public is aware of it.

Fascinating stuff, isn’t it? Imagine what can happen as older gas plants are upgraded and as new ones are built with much greater efficiency. Natural gas use can only increase and help heat and light even more of the world.