No matter how you analyze it, natural gas is dominating—absolutely dominating—energy production in America and yielding economic and environmental gains.

Three successive Today In Energy posts from the Energy Information Administration
(EIA) build a powerful case for natural gas, for the shale revolution and for fracking. They also demonstrate, if you know what to look for, the inability of renewables to compete.

The full posts may be found here, here and here, but let me just cite the key data, which speaks for itself (emphasis added):

EIA’s long-term projections show that most of the electricity generating capacity additions installed in the United States through 2050 will be natural gas combined-cycle and solar photovoltaic (PV). Onshore wind looks to be competitive in only a few regions before the legislated phase-out of the production tax credit (PTC), but it becomes competitive later in the projection period as demand increases and the cost for installing wind turbines continues to decline…

Natural gas combined-cycle units account for the largest share of new power plants (43% of the utility-scale total from 2021 through 2050). Solar PV’s value-cost ratio is slightly less than 1.0, indicating that, on average, its value does not cover its costs, but capacity is still added. In some cases, these solar PV additions may be uneconomic, but they still occur to satisfy the renewable portfolio standard (RPS) requirements in 29 states and the District of Columbia.

Onshore wind’s value-cost ratio remains lower than 1.0 throughout the projection period and lower than solar PV. Consequently, little onshore wind is installed in the Reference case, except in the near term when wind capacity is built to take advantage of the available PTC.

Wind is basically irrelevant without subsidies, we see. That’s also true of solar, of course, but the subsidy scam in that case is a broader one that is less threatened by cutoffs. Moreover, as I’ve pointed out here numerous times, capacity is not generation. Capacity is theoretical. Generation is what actually happens. Solar and wind only generate, at best one-third of their theoretical capacities, while combined cycle natural gas plants can achieve two-thirds. That completely changes the chart, of course, leaving natural gas in twice as good as good a position as it appears.

This is how it looked in 2018, for example, before adjusting for capacity factors: 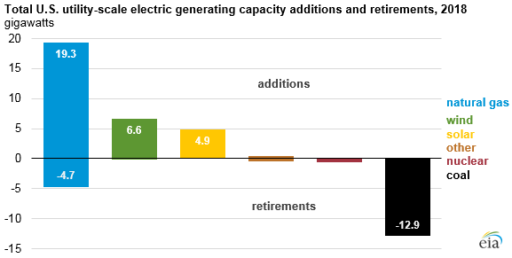 According to EIA, “U.S. utility-scale additions in 2018 primarily consisted of natural gas (62%), wind (21%), and solar photovoltaic (16%) capacity.” Once again, though, this is capacity, not actual generation. The 19.3 MW of gas added is maybe 12 MW of real generation, whereas the 11.5 MW of solar and wind is really about 3 MW, meaning natural gas accounted for roughly 75% or more of new generation added. That’s domination of the market and look where it happened—especially in Pennsylvania where the shale revolution wrought by fracking delivered the miracle: 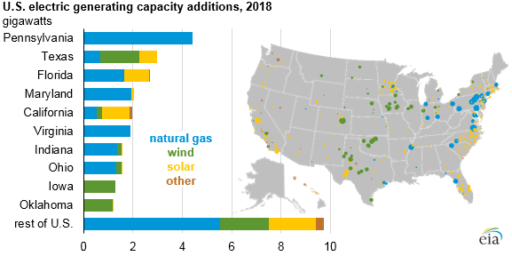 And, it’s Pennsylvania and the rest of the Appalachian region that now supplying much of the nation (not to mention much of the world in the future) with natural gas:

The 2019 Annual Energy Outlook (AEO2019) Reference case shows continued growth of natural gas production in the Mid-Atlantic and Ohio region from the Marcellus and Utica formations, resulting in increases of natural gas being transported to the Eastern Midwest and, ultimately, into the South Central region, which includes the Gulf Coast and Texas.

While the South Central region itself contains shale plays that produce natural gas, such as the Wolfcamp in the Permian Basin and the Haynesville, natural gas consumption in the region outpaces production in the Reference case, requiring additional supplies of natural gas from other regions to meet growing demand both within the region and for liquefaction facilities that would export natural gas to other countries. 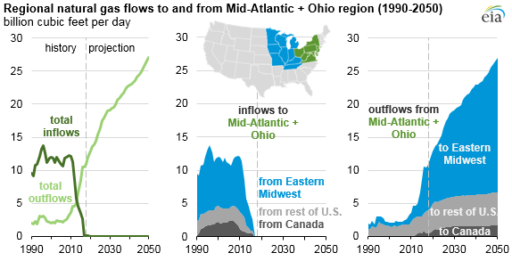 Dry shale natural gas production in the East accounts for over half of this growth as production more than doubles during the projection period from 24 Bcf/d in 2017 to 50 Bcf/d in 2050 in the Reference case. This forecast growth is driven by technological advancements and improvements in industry practices, which lower production costs and increase the volume of oil and natural gas recovery per well. In the Reference case, these advancements have a significant cumulative effect on plays that extend over wide areas that have large undeveloped resources, such as the Marcellus and Utica. 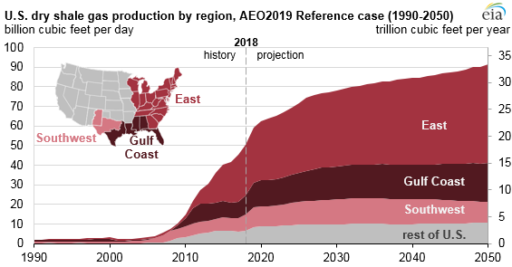 Although historically a net supplier of natural gas to other U.S. markets, the South Central region’s forecast demand growth outpaces its production growth throughout the AEO2019 projection period. Growing U.S. liquefied natural gas (LNG) export volumes are the main contributor to this growth as U.S. LNG export capacity is expected to double from 5 Bcf/d to 11 Bcf/d by the end of 2020.

LNG exports continue to grow in the AEO2019 Reference case, averaging 14 Bcf/d by 2030. In addition to increased U.S. LNG exports from Gulf Coast facilities, both U.S. natural gas pipeline exports to Mexico and U.S. natural gas consumption in the industrial and electric power sectors also increase during the projection period in this region. As a result, the South Central region is projected to become the fastest-growing demand market in the United States. 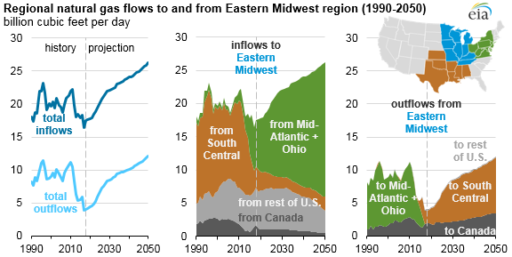 This AEO2019 forecast trend continues the recent reversal of past flows, where natural gas from the South Central region—which includes Texas and the Gulf Coast—traditionally moved into population centers in the Northeast through either the Eastern Midwest or Southeast regions. In 2008, flows into the Northeast averaged 12 Bcf/d. However, by 2013, these volumes had dropped to 5 Bcf/d, and today the region is a net natural gas exporter, primarily to the Eastern Midwest.

This reversal of flows was accompanied by increased bi-directional capacity on interstate pipelines and by new pipeline capacity to transport increased natural gas supplies from the Marcellus and Utica Basins to domestic and international demand markets. From 2008 to 2018, pipeline capacity out of the Northeast, which includes both the Mid-Atlantic and Ohio region and New England, grew from 5 Bcf/d to 23 Bcf/d, as estimated by EIA.

To transport increasing volumes of natural gas from the Mid-Atlantic and Ohio region to demand in the South Central region, EIA projects that additional natural gas pipeline capacity beyond what is currently under construction will be built from the Mid-Atlantic and Ohio region, primarily through the Eastern Midwest region. In the AEO2019 Reference case, an additional 4 Bcf/d of pipeline capacity out of the Northeast will be constructed during the projection period. This capacity is required to realize the growth in dry natural gas production in the East, and it contributes to growth in both domestic natural gas consumption and liquefied natural gas exports from the South Central region.

2 thoughts on “Natural Gas Dominates Everything Energy in America”