Our buddy Nick Grealy over at No Hot Air and our friends at Energy In Depth recently brought brought some new data to our attention; some very positive data about carbon emissions and the role natural gas has had in the bending of the CO2 curve. Nick pulled some information from a report leading up to the release of the IEA World Energy Outlook and Seth Whitehead at EID looked at both the actual report and a summary. What they both found, amidst politically correct documents of the sort one expects from these agencies, was some unabashedly good news and natural gas can take the credit, though the IEA does everything it can to downplay that fact.

The IEA reports are painted with enthusiasm for renewables that borders on the ridiculous given what we know about their costs and inability to deliver reliable energy without natural gas back-up. They also talk about capacity rather than generation to obscure this fact. Yet, the reports simply cannot deny reality. Consider this paragraph from the briefing leading up to the release of the reports (emphasis added):

Then, there is this chart, clearly demonstrating what’s happening with carbon emissions as the curve is bent: 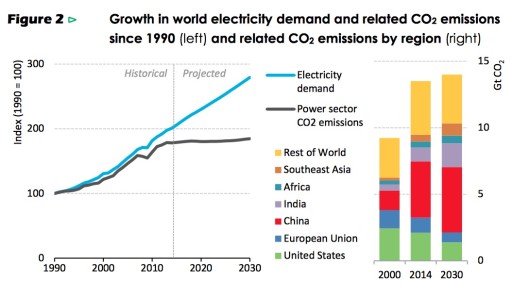 Note where the biggest carbon emissions drops are coming from – the US. Now look at these four quotes pulled out of the 2015 World Energy Outlook report by Seth Whitehead (emphasis added):

There are good reasons to be upbeat about the future for natural gas: its relative abundance; its environmental advantages compared with other fossil fuels; the flexibility and adaptability that make it a valuable component of a gradually decarbonizing electricity and energy system…

Where it replaces more carbon-intensive fuels or backs up the integration of renewables, natural gas is a good fit for a gradually decarbonizing energy system: a consumption increase of almost 50% makes it the fastest-growing of the fossil fuels… world natural gas production is not derailed in the longer term, and reaches nearly 5.2 trillion cubic metres (tcm) by 2040…

Unconventional natural gas is set to become an increasingly important part of global gas supply, accounting for more than 60% of the increase in total gas production over the period to 2040. Projected production of shale gas, coalbed methane and tight gas, along with smaller volumes of gas converted from coal, rises from around 630bcm in 2013 to almost 1700bcm in 2040…

The shale gas revolution in the United States is a reminder that energy systems retain the potential for sharp and rapid change, once a technology reaches a tipping point of proven effectiveness and commerciality. In 2005, shale gas production accounted for 6% of US total gas production and 1% of global gas production. By 2014, shale gas production had grown to a staggering 52% of US output and 11% of world output. Even though gas markets outside North America have not yet felt the direct impact of this revolution (pending the start of US LNG exports), the indirect results – in a reorientation of market expectations, changed gas and coal  trade flows, and the economic boost to parts of the US economy – have already been  momentous inside and outside North America.

Moreover, that isn’t all. Dr. Fatih Birol, the IEA Executive Director, in a question and answer session following the presentation of the report, said this:

Yes, that’s the real story. A “golden age of gas” is already delivering big drops in carbon emissions in the US and that’s the good news a whole lot of fractivists try hard to ignore but the facts keep getting in the way. 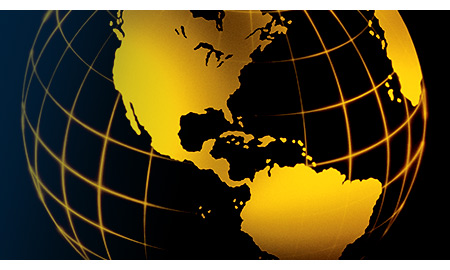