The reaction of fractivists, who should be happy about waterless fracking, has been one of contempt illustrating their preference for ideology over science.

Yesterday, we carried a story by Jim Willis about a waterless fracking proposal from a group of landowners in Tioga County, New York. The reaction from fractivists has been totally predictable, of course, ranging from ultra-skepticism to outright contempt. It’s all quite revealing as to the true mission of the other side, which is nothing if not ideological and has no attachment to science.

The Tioga County proposal involves the use of process pioneered by GasFrac, a Canadian company, described as follows on their website:

Sand blender – This proprietary blender is a pressurized system in which proppant is preloaded, purged and pressurized with the nitrogen. A controller uses a pressurized auger system to meter the proppant into the gelled LPG, creating a gelled LPG sand laden slurry to stimulate the reservoir.

This process, of course, would eliminate the “hydraulic” part of the hydraulic fracturing process, and interestingly enough, the original Generic Environmental Impact Statement on the Oil, Gas and Solution Mining Regulatory Program (GEIS) adopted by the New York State Department of Environmental Conservation (DEC) in 1992 and supplemented in 1993, anticipated this type of fracking with the following language:

Foam fracs were gaining in popularity a few years ago, but have fallen into some disfavor. The foam contains nitrogen, and pipeline companies in some areas of New York have asked operators to cease using the foam when too much nitrogen, which has no heating value, started appearing in their gas pipelines.

Because of the nitrogen, foam fracturing systems contain only 20 to 40  percent liquid. The low water content makes foam useful for treating clay bearing formations. Hydration or swelling of the clays on contact with the water can plug off production. Foam systems also have a higher viscosity than water gel systems and therefore can transport larger amounts of sand. Foam systems are also lighter than water-gel systems and the reduced hydrostatic head enhances well clean-up after stimulation. In addition, foam systems produce considerably less waste fluid because of the lower proportion of water used.

Hmm…This suggests the GEIS may already provide for the type of fracking Tioga County landowners propose and, therefore, a permit could conceivably be issued without delay or further environmental assessment, although that would require political will Andrew Cuomo would seem not to possess. It is just as possible, in fact, given the ugly political corruption that pervades New York State policy making, that another laborious SGEIS process could be involved, but if Cuomo is smart he’ll recognize this is his out from a bone-headed move widely recognized as purely political, Time will tell, but there is certainly a rationale for simply issuing a permit under the existing GEIS. 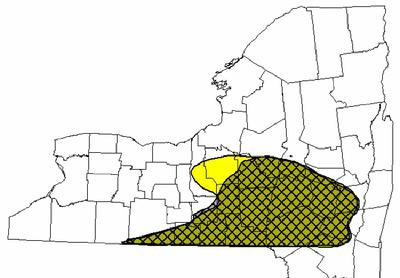 Regardless, the prospect of waterless fracking, which would eliminate not only the water use of which fractivists unfairly complain, but also much of the trucking impacts, has sent them into a hyperbolic orbit, revealing how little they really care about the environment in contrast to their fossil-fuel hatred. Consider these comments we’ve seen out of the fractivist camp:

I think the delusion of “millionaires in making” is present here, about which a recent article was written as being very prevalent in the thinking of people in the U.S. I sense a feeling of entitlement on their part. These people are willing to put the health and safety of the rest of us by embarking on a risky project. I doubt that they would even entertain the idea of a solar farm on their property since that’s “foreign.”

Then, there’s this from the Texas trustfunder Chip Northrup, summer time member of the Cooperstown set, who seems to think not-so-clever versions of gutter language and ridiculous comparisons will serve his case:

New York has effectively banned high water volume horizontal fracks, but a group of Upstate frack addicts is proposing to frack with gelled Liquified Petroleum Gas (eg. Napalm) as if that’s a safe loophole to get around the state’s recent prohibition on fracks of over 300,000 gallons. You can frack a shale well with less than 300,000 gallons of liquid propane. The recent prohibition on HVHF wells does not address such a frack. The DEC is not unaware of this. In fact, they address it in the SGEIS:

“Well applications that specify and propose the use of LPG as the primary carrier fluid will be reviewed and permitted pursuant to the 1992 GEIS and Findings Statement.” (Final SGEIS 2015, page 9-10).”

Meaning a propane frack application would fall under the 1992 GEIS, which did not contemplate a shale well fracked with napalm.

As other fractivists with their heads screwed on a little tighter have noticed, Chip went off the reservation on this one (emphasis added):

Napalm is, by accepted definition, a liquid.  Gelled propane is only a liquid while under pressure or if very cold.   Methane gas released in a well is flammable and dangerous.  I think one of the biggest dangers of propane and butane is they are dense gasses, and will pool and settle.  Calling it napalm doesn’t lend to a real discussion of its risks and dangers.  Therefore it is a distraction, though it is a clever way to draw attention.

Finally, there is this:

Don’t you ever have one of those days where you just want to throw a match on a gashole?

Well, I am having one of those days. I rarely comment because I am afraid the sentences that print from my finger tips will contain words that I shouldn’t say.

I am coming to the end of the line with stupid people!!! I can’t believe this fight still continues when it is plain as the nose on our faces what is happening.

These people are so entertaining when they go apoplectic. They’re also, obviously, very worried, which demonstrates what a great initiative this is on the part of Tioga landowners, who, the JLCNY reports, have offered the following additional explanation of their proposal:

The Snyder Farm Group in cooperation with Tioga Energy Partners LLC announced today, at a press conference held at Barton Town Hall, that 2 applications for natural gas well permits have been filed with the New York Department of Environmental Conservation (DEC). The first application is for a vertical stratigraphic well into the Utica formation at approximately 9500 feet below the surface and is currently posted on the DEC’s website. This well will be used to evaluate the potential for natural gas in all the geological formations that the well bore passes through. The second application is to back out of the first well up to the Marcellus formation at about 4000 feet and turn horizontally into that formation where it will be stimulated with gelled propane to release the natural gas. This well unit located in the hamlet of Halsey Valley and the town of Barton, is a 56.56 acre unit with a single well bore. With this “test well”they hope to prove 3 things; first that this process is legal under the DEC’s current GEIS regulations adopted in 1992, second that the process is safe, and third that the results produce an economically viable natural gas well. Please stay tuned for further updates as this process develops.

I have no idea whether this will work or how DEC will ultimately react to this proposal, but when I read comments like those above, I know this a project worth supporting because it’s a case of playing offense, rather than defense. Good luck to these Tioga County landowners!

6 thoughts on “More on that NY Waterless Fracking Proposal”