Big Green, Inc. outspends industry by a very wide margin in grass-roots lobbying and gets away with it by using charitable tax status to hide the spending.

These powerful foundations exert their influence through thousands of grants to national and international environmental organizations such as the Sierra Club as well as seemingly local organizations such as Bold Nebraska and the Great Lakes Environmental Law Center. This is done through a complex network of private foundations, pass-through public charities, and secretive donor-advised funds that serve to obscure massive international funding channels. 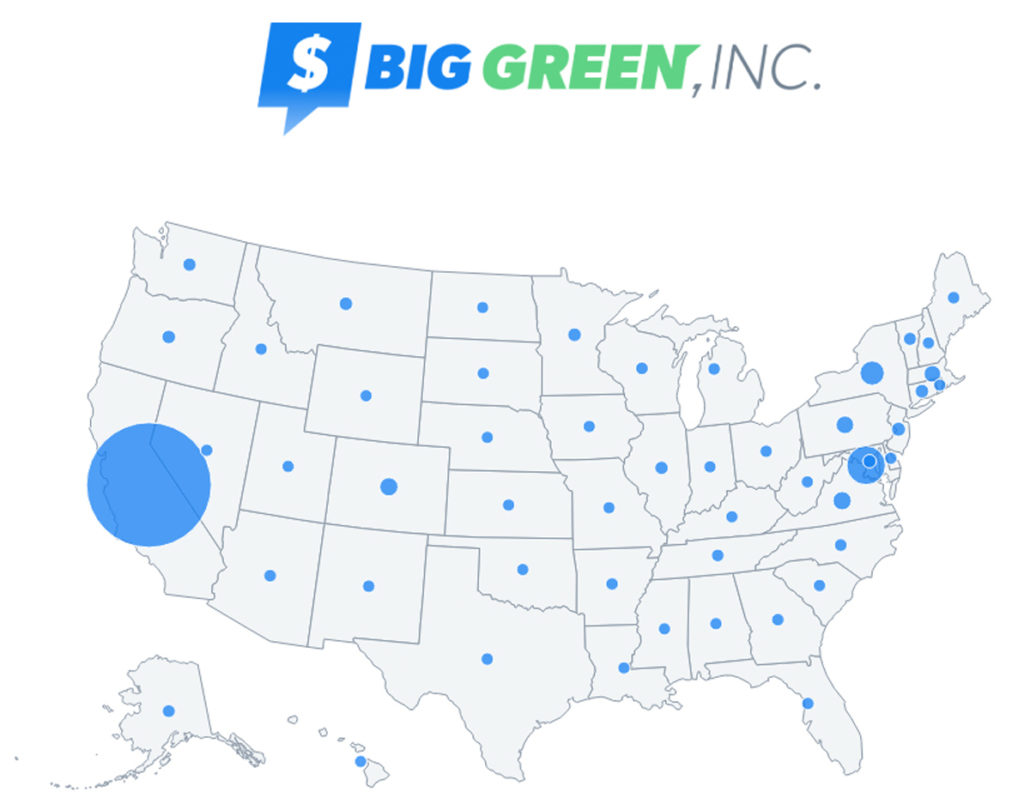 Access the Big Green database by clicking on this image!

Attempts to understand how some of this money flows, such as the Senate Committee on Environment and Public Works Minority Staff Report on the “Billionaires Club” controlling the far-left environmental movement, elicited more questions than answers. For instance, why did the Tides Foundation give over $10 million to Tides Center while also receiving $39 million from them? Why has the Billionaires Club gone to such great lengths to hide their generous support of supposedly charitable causes? And who is behind Klein Ltd., the mysterious foreign company bankrolling the big green Sea Change Foundation?

Attempts to follow the money often end with the Tides Foundation. As a donor-advised fund, the Tides Foundation is not required to disclose the source of funding for any of its thousands of grants. We know that it has received hundreds of millions of dollars from most of the major left-wing foundations (including the other three covered in this update to BGI), but whose money went where is significantly obscured – a practice that the left would decry as “dark money” were the shoe on the other foot. Now that their spin-off the Tides Center is handling administration and incubation projects, the Tides Foundation can keep its focus on scrambling and passing billions of dollars for a hefty 8 percent handling fee.

A slightly newer player in the environmental shell game is the New Venture Fund (NVF), which could be described as an East Coast version of the Tides Foundation. Started in 2006 as Arabella Legacy Fund with just a modest $725,000 grant courtesy of Wyss, as of 2015 NVF had funding amounting to $315.7 million. This massive increase reveals a growing desire among the big money funders of the environmental left to scramble their money in innovative ways.

These donor-advised funds get the majority of their money from foundations that are perfectly capable of giving money directly without paying millions of dollars in handling fees, so what justifies their increasing prominence? It’s anybody’s guess, but there are definitely advantages to this green smoke screen. When the Tides Foundation scrambles and passes grant money it allows organizations to avoid public accountability for their alarmism, such as when their 1989 campaign against the chemical Alar was questioned.

When the Tides Center offers financial and administrative support for start-up advocacy groups, those groups gain a sort of blanket tax-exempt designation that is at best a legal gray area. And when the New Venture Fund receives a contribution from the William K. Kellogg Foundation to “ensure quality free public education is a constitutional right for every Mississippi child” and then grants money to an organization supporting a ballot initiative that claims to do exactly that, the Kellogg Foundation can plausibly deny that it broke federal laws preventing it from earmarking grants for political purposes.

To China and Back

Big Green, Inc. focuses on grants made to U.S.-based organizations for projects in the U.S.; however, a lot of money gets shipped overseas as well. For instance, Swiss billionaire Hansjörg Wyss of the U.S.-based Wyss Foundation claims to have already invested more than $450 million in environmental projects in Africa, South America, North America and Europe, and BGI grantees include internationally-oriented organizations such as the Greenpeace Fund.

U.S. climate imperialism sparked the ire of Canadians whose livelihoods were endangered by American money via the Tar Sands Campaign, a large-scale pipeline obstruction operation planned and paid for by the Rockefeller Brothers Fund, William and Flora Hewlett Foundation, and Tides Foundation. All four of the foundations examined in this update to BGI also gave money to the World Wildlife Fund, which has apparently supported paramilitary forces that tortured and killed people across Africa and Asia.

The super-national structure of the environmental lobby suggests that foreign resources may be influencing U.S. jobs and politics as well. The Oak Foundation, a private foundation headquartered in Switzerland and led by Alan M. Parker, a U.K. native who now resides in Switzerland, has operations in United States, the United Kingdom, India, Zimbabwe, Tanzania, Bulgaria, and Denmark.

It has given grants to U.S. groups such as the Center for International Environmental Law, a vocal supporter of climate litigation whose board of trustees includes the attorney to one of the climate litigants, and EarthRights International, which represents Boulder (City and County) and San Miguel County, CO in their climate liability lawsuit against Exxon Mobil and Suncor.

Even apparently regional foundations may be intimately involved in U.S. politics; the European Climate Foundation claims not to consider activities outside of EU climate strategy, but emails revealed their Global Strategic Communications Service in correspondence with Washington Governor Jay Inslee to develop a communications plan around the U.S. Climate Alliance and Climate Week.

The most powerful and determined international opponents of American energy are the Russian government and its state-run oil and gas monopoly, Gazprom. Much of Central and Eastern Europe is dependent on Russian energy, but the explosion of U.S. oil and gas exports as a result of the shale boom threatens Russia’s economic and political stranglehold.

This is why Vladimir Putin, whose regime regularly jails Russian environmental activists, expressed concern that “fracking poses a huge environmental problem,” and why the Russian state-controlled media source RT ran anti-fracking programming. We should not be surprised, therefore, by charges of Russian orchestration behind European anti-fracking and other environmental protests, as have been raised by a former Secretary General of NATO, Romanian Prime Minister, Belgian Climate Minister, Ukrainian Foreign Minister, and German Chancellor Angela Merkel. Even Hillary Clinton noted the Russia-environmentalist relationship in a speech in 2014:

“We were even up against phony environmental groups, and I’m a big environmentalist, but these were funded by the Russians to stand against any effort, oh that pipeline, that fracking, that whatever will be a problem for you, and a lot of the money supporting that message was coming from Russia.”

Has the Russian campaign against European energy come to the U.S. as well? It is very possible. Part of the Russian social media campaign in 2016 was aimed at liberals concerned about environmental issues and rallied for Green Party candidate Jill Stein. Picking up where the Senate EPW report left off, the Environmental Policy Alliance investigated Klein Ltd., the Bermuda company that gave $23 million dollars to the Sea Change Foundation.

This unveiled that Klein is a shell company formed by two employees of the Bermuda law firm Wakefield Quin, both of whom held directorships in a group owned by Russian minister of telecommunications and longtime Putin friend Leonid Reiman and which was the subject of a 2008 money laundering case. In 2017, the House Science, Space, and Technology Committee sent a letter to the Treasury Department to investigate these allegations; the Institute for Energy Research has since filed a Freedom of Information Act (FOIA) suit to shed light on the Treasury Department’s lack of response to this Congressional inquiry.

As the Justice Department has revitalized enforcement of the Foreign Agents Registration Act, there are other groups that may deserve attention. Last year, the House Natural Resources Committee opened an investigation into the ties between the Natural Resources Defense Council (a frequent BGI grantee) and the government of China. While it boasts of suing the U.S. federal government “about once every ten days” since President Trump’s inauguration, NRDC and its China office appear to take a fawning stance towards the totalitarian government of the world’s largest polluter.

The Natural Resources Committee’s June 5 letter details instances like NRDC complimenting China’s “bold new reforms” on domestic fisheries after Greenpeace released a study critical of China’s fisheries and of NRDC criticizing those skeptical of China’s commitment to the Paris Agreement. NRDC even sued the U.S. Navy multiple times to drastically limit or stop naval training exercises in the Pacific citing environmental concerns. No such lawsuit or criticism has been lobbied against the Chinese Navy.

Another investigation was opened by the Natural Resources Committee regarding the possible foreign agent registration requirements of the World Resources Institute (WRI), a grantee of, among others, the MacArthur Foundation and Rockefeller Foundation. This D.C.-based think tank has formally operated in China since 2008, and according to its 2017 registration certificate it does so under the “guidance and supervision” of the Beijing Public Security Bureau and Chinese Ministry of Ecology and Environment (MEE).

It routinely interacts with senior Chinese government and Communist Party officials, supplies positive quotes for Chinese government press-releases, and pens flattering op-eds in the Chinese Communist Party Propaganda Department’s English-language newspaper China Daily. Like the NRDC, WRI routinely criticizes the U.S. government but ignores the Chinese government’s abysmal record on the environment and the rights of environmental activists. Even on the same issue the two are held to different standards: WRI praised China’s business-as-usual pledge for the Paris Agreement but pushed for extreme commitments from the United States.

The World Resources Institute denied working on behalf of any foreign government or principals, a statement that the Natural Resources Committee contradicted in a second letter documenting WRI communications to U.S. government officials, clearly on behalf of MEE. One of the U.S. officials who received the message was Todd Stern, a State Department special envoy for climate change, now a distinguished fellow at WRI.

These revelations show WRI to be more than simply an environmental group that received resources and misinformation from the Chinese government, but rather a powerful participant in the political game. The Institute for Energy Research issued a FOIA request to find out more about WRI’s foreign relationship, which the U.S. Department of State failed to respond to. We are now involved in a FOIA lawsuit to obtain this much-deserved response.

The Chinese government’s support of WRI and NRDC (and vice versa) increase its reputation as an environmentally concerned nation. This gives China the cover to rally behind international agreements that keep the energy dominance of rival powers in check and push for other nations to supply financial aid for climate projects Asia and Africa that China may be heading. All the while, they secure weak climate pledges for themselves and secretly defy even those.

Meanwhile, U.S.-based environmental groups are used to challenge politically threatening American actions, such as U.S. naval presence near the South China Sea. China and Russia have displayed zero concern for the environment but have discovered that they can hijack the environmental movement by giving funds and direction to groups acting as useful idiots, or worse. This is all made possible by a global but muddled alliance of big-money donors, foundations, and non-profits that put U.S. national security at risk through its secretive tactics aimed at a total transformation of the world.