A Mobile Oilfield Learning Unit is helping students across Northeastern Pennsylvania learn about energy thanks to Cabot, Southwestern Energy and Williams.

Youths at schools in three counties will have a better idea of how their math and science studies relate to the natural gas industry by the end of the week, as the Mobile Oilfield Learning Unit (MOLU) makes its way through the region. Cabot Oil & Gas Corporation sponsored the virtual field trip, which made its first stop at Elk Lake Elementary School on Monday. 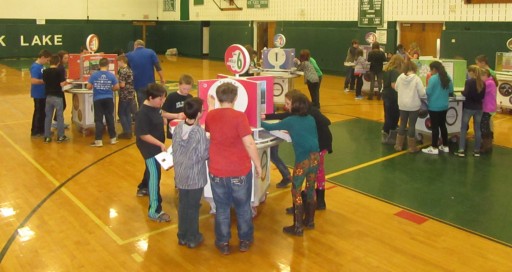 Fifth grade students at Elk Lake Elementary School were among youths across the region this week engaged by the Mobile Oilfield Learning Unit. Photo by Rick Hiduk

Students are divided into up as many as 24 groups to move through four activities at each of six stations that resemble kiosks. With workbooks in hand, they move through a variety of aspects of the gas and petroleum industries, including safety, history, geology, oil exploration and extraction, and products derived from fossil fuels.

“We really try to get the kids engaged in the sciences,” said Steven Vance, the MOLU facilitator for the Offshore Drilling Center, who noted that the traveling exhibit was designed to help American children, who tend to fall behind in STEM (science, technology, engineering, and math) subjects. By getting the kids to look at the energy industry from a variety of perspectives, he added, “We show them that there are other fields in the oil industry that you can go into without being the guy on the gas well.”

Vance assisted the students, as they turned knobs and pushed buttons that simulated lab experiments and drilling equipment. The fifth graders needed a little more help to understand some of the technical terms used in the exhibit, such as fractional distillation, hydrocarbons, porosity, and viscosity, but Vance patiently worked those who raised their hands through each activity until they found the answer to the corresponding question.

“We try to scratch the surface of everything,” said Mrs. Harder, fifth grade math, science and social studies teacher at Elk Lake. She noted that her students have just begun exploring the basics of geology – rocks and the layers of the earth – but she was confident that they would find some relevance in the activities. “Any time we can do anything that is hands-on, they get a little more knowledge that we can give them in the classroom.”

Vance leaves workbooks with the teachers so they can follow-up the MOLU visit in the classroom. “We like to see if they just had fun or if they actually learned something,” he explained.

Harder noted that energy companies are active participants in a career fair that the students will attend in the spring. Their understanding of the opportunities that the gas industry has brought to the area far exceeds that which Harder and her fellow teachers had when they were students.

“They are much more aware than we ever were,” said Harder. “Some of their parents work in the gas industry, and it’s all around them. It’s in their back yards.”

Subsequent to Elk Lake, Vance was scheduled to take the MOLU to schools in the Blue Ridge, Tunkhannock and Mountainview school districts, as well as to Scranton Central High School. Vance said that he has taken the exhibit all over the country but primarily to energy-producing regions. 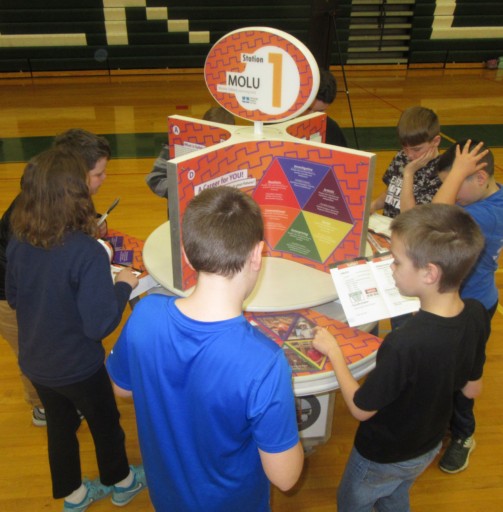 Students surrounding Mobile Oilfield Learning Unit Station #1 and learn, among other things, the variety of careers offered by the industry. Photo by Rick Hiduk

There are currently two MOLUs based in Texas and Houston. Cabot, along with Southwestern Energy and Williams, is investing in a third MOLU to be permanently stationed in the Appalachian region to serve Pennsylvania, Ohia, and West Virginia.

“When the MOLU made its first trip to Pennsylvania last year, we planned on visiting 10 schools over two weeks. But the demand for the unit prompted us to extend the visit by one week,” explained Bill desRosiers, External Affairs Coordinator for Cabot. “Even still, we had a waiting list of 15 schools. It’s clear the students and the faculty enjoy the program. And the pre- and post-test data demonstrates that the students are learning from it. That’s why Cabot has decided to fund a permanent MOLU here in Pennsylvania.

MOLU 3 will feature many of the same lesssons as its predecessors but include some updates to reflect advancements in the industry and some specifics to the Appalachia region. MOLU 3 will debut in the fall of 2018.

“Over the next few tears, we will work to bring this wonderful learning opportunity to as many students, in as many schools as possible,” desRosiers added.

This article reposted with permission from Well Said Cabot.