Millennium Pipeline asks FERC to intervene and issue them a Notice to Proceed after Gov. Cuomo and NY DEC refuse to approve the necessary permits.

This is it folks. This is the case that will crush New York Gov. Andrew Cuomo’s blockade of important pipeline projects in the Empire State. For 19 months the New York Dept. of Environmental Conservation (DEC) has dithered around, at the prompting of Andrew Cuomo, and has refused to grant federal Section 401 Water Quality Certification stream crossing permits for a tiny 7.8 mile pipeline spur off the Millennium Pipeline in Orange County, called the Valley Lateral Project, to feed a gas-fired electric generating plant that is now under construction.

Statutorily, New York has 12 months (1 year) to review such an application and act on it. New York has refused to act on it. So Millennium took DEC to the U.S. Court of Appeals for the District of Columbia Circuit. In June, the court dismissed the lawsuit by Millennium, which at first blush may seem like a blow. But, it was the reasoning and opinion of the judges in dismissing the case that will change everything in New York.

The judges said there is no case because if, as Millennium says, the DEC is denying the water permits, FERC itself has the power to jump back in and simply override DEC and issue the permits. Last Friday Millennium pulled the trigger and did it—they sent an official request to FERC (copy below) that outlines their Herculean efforts to work with DEC over the past 19 months, and asks FERC to move forward with permission to build the pipeline anyway—ignoring DEC.

If FERC agrees (and we think they will), DEC is about to become irrelevant in all FERC-approved pipeline projects they are blocking, including the Williams Constitution and National Fuel Gas Northern Access projects.

In the letter below, Millennium outlines how they have gone far above the call of duty in working with DEC. Millennium bent over backwards, accommodating DEC requests, which added an extra $18 million to make DEC happy. From the letter to FERC:

Millennium’s formal application, which it filed in November 2015, contained nearly 1200 pages of analysis and construction details, including explanations of how water quality would be protected. Millennium continued to work with the NYSDEC, making revisions to the project in response to NYSDEC’s stated preferences and ultimately agreeing in the application and subsequent submissions to use horizontal directional drills (“HDD”) or conventional bores with respect to nine of the twelve required stream crossings. Of the remaining three streams, two are intermittent and expected to be dry during construction. Although the Project has a limited number of resource crossings, these commitments to use trenchless crossing methods for 90 percent of the perennial streams ensured that the Project has minimized potential Project-related impacts to water quality. These commitments were not without impact to Millennium, increasing the project costs from an estimated $39 million to approximately $57 million.

Even though Millennium has worked with DEC for 19 months, DEC has refused to grant the water crossing permits. Therefore, Millennium made this formal request to FERC:

Millennium knows of no additional information that is needed by the NYSDEC; nor is Millennium aware of any NYSDEC concerns that have not been addressed. But, despite the limited size of the Project and Millennium’s considerable mitigation efforts, the NYSDEC failed to act on Millennium’s application. The CWA Section 401 Water Quality Certification requirements have now been waived, and Millennium provides below the required “evidence of waiver thereof.” Accordingly, Millennium has fully satisfied Environmental Condition 9, and the Director should issue a NTP authorizing construction of the Project no later than August 31, 2017, to allow Millennium sufficient time to engage construction contractors and complete land acquisition before full construction can commence.

An “NTP” is a Notice to Proceed with construction. Millennium pretty much quotes the judges in the federal case, saying New York has now waived its right to award the certificate, and FERC may now, under law, step in and do it. Looks like we will have an interesting summer ahead here in New York. 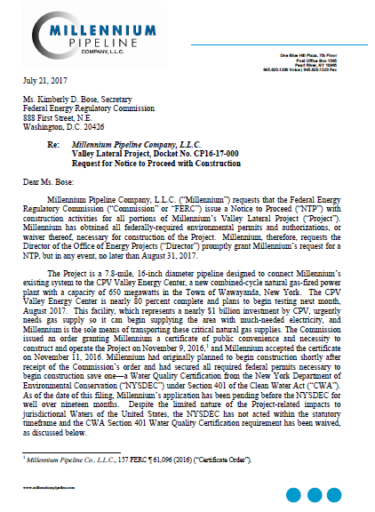