That number, by sheer coincidence, is also the percentage of methane in Earth’s atmosphere. That’s a trivial amount, you say: 1.7 parts per million. There’s three times more helium and 230 times more carbon dioxide in the atmosphere. You’re absolutely right, again.

Equally relevant, only 19% of that global methane comes from oil, natural gas and coal production and use. Fully 33% comes from agriculture: 12% from rice growing and 21% from meat production. Still more comes from landfills and sewage treatment (11%) and burning wood and animal dung (8%). The remaining 29% comes from natural sources: oceans, wetlands, termites, forest fires and volcanoes.

The manmade portions are different for the USA: 39% energy use, 36% livestock, 18% landfills, and 8% sewage treatment and other sources. But it’s still a piddling contribution to a trivial amount in the air.

Of course, the Obama EPA and Climate Cataclysm Industry ignore these inconvenient facts. They insist that methane is “a far more potent greenhouse gas” than carbon dioxide, and that its emissions must be drastically reduced if we are to avoid “runaway global warming.” So EPA and other federal agencies are preparing to unleash a tsunami of new regulations to block natural gas drilling, fracking, flaring and production, while radical environmentalists orchestrate new assaults on petrochemical plants that create plastics, paints, fabrics, computer and vehicle components and countless other products for modern life. 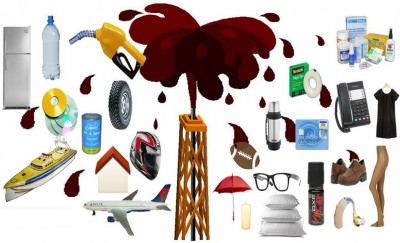 They want us to believe that government regulators can decree Earth’s climate simply by controlling methane and carbon dioxide – regardless of what the sun, ocean circulation, recurrent planetary temperature cycles and other powerful natural forces might do. They say it’s pure coincidence that these two trace gases (CH4 and CO2) are the only climate-affecting mechanisms that are associated with the fossil fuels and industrialized economies they despise.

They also want us to believe reducing United States methane emissions will make a huge difference. But even if US manmade methane emissions are 20% of the worldwide total, the 39% US fossil fuel portion of that US portion means even totally eliminating US methane emissions would reduce global manmade methane output by a minuscule 7.8 percent. Under a best-case scenario, that might keep atmospheric methane below a still irrelevant 0.00020% (2.0 ppm; 20 cents out of $100,000) for a few more years.

This smells like fraud. And as New York AG Eric Schneiderman so kindly reminded the climate skeptics he’s threatening with RICO, “The First Amendment does not give anyone the right to commit fraud.”

Perhaps EPA plans to go after America’s agricultural sector next. After all, as former UN Secretary General Kofi Annan intoned last year, red meat is bad for us (cancer) and for the climate (animal flatulence and manure). Moreover, “insects have a very good conversion rate from feed to meat,” there are 1,900 species of edible insects on Planet Earth, and more than a billion people already make bugs part of their diet. Perhaps the IPCC and White House will serve roasted roaches at their next state dinners?

That would reduce US methane emissions a bit more. But it gets even more deceitful, more barking mad.

The un-ratified 2015 Paris climate treaty obligates the United States, Australia, Canada and Europe to continue reducing their fossil fuel use and emissions – even though they can hardly afford to kill more millions of jobs and further roll back living standards for all but their ruling elites.

Meanwhile, developing countries will not and cannot afford to lock up their fossil fuels, shut down their economic growth, and leave billions of people mired in poverty, malnutrition and disease. Indeed, under the Paris treaty, they are not required to reduce their fossil fuel use or “greenhouse gas” emissions; they need only take voluntary steps to reduce them, when it is convenient for them to do so.

That means slashing US methane (and carbon dioxide) emissions – and the jobs, living standards, health and welfare that fossil fuels bring – will have no effect whatsoever on atmospheric greenhouse gas levels.

But that is irrelevant to Mr. Obama and his EPA. The fact is, this methane mendacity and madness has nothing to do with stabilizing Earth’s climate. It has everything to do with hogtying and bankrupting US fossil fuel companies, controlling industrial activities and people’s living standards – and mandating a costly transition to renewable energy, while rewarding the hordes of activists and cronies riding that money train.

That raises a critical question: Just where and how will we produce those “eco-friendly” biofuels? 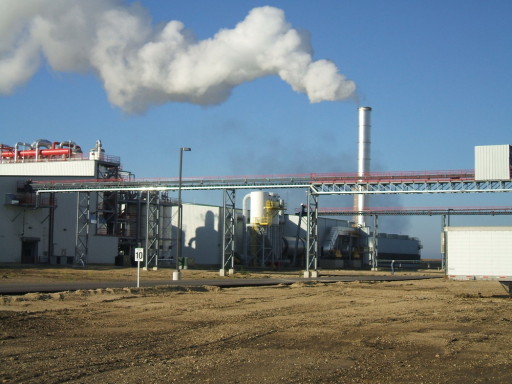 US ethanol production alone requires all the corn grown on an area the size of Iowa (36 million acres), and it makes up only 10% of the country’s E10 gasoline blends. Replacing all gasoline with ethanol from corn, sorghum or still-illusory switchgrass would therefore require ten Iowas: 360 million acres. But there is one other critical factor: ethanol has one-third less energy per gallon than pure gasoline.

That means we would need to plant an additional 120 million acres, 480 million acres in all, just to replace gasoline. That’s equal to Alaska, California and West Virginia combined!

Replacing all the liquid petroleum we use annually (291 billion gallons) would require twice as much land – some 45% of all the land in the United States: six times more land than we currently have under cultivation for all cereal crops – plowing even marginal croplands, deserts, forests and grasslands.

We’d also need far more fuel to grow, harvest and convert those crops into “eco-friendly” fuel. That would likely mean turning southern Canada into a vast biofuel plantation – unless, of course, the ruling classes simply impose lower living standards and vehicle ownership restrictions on us commoners.

Growing biofuel crops also requires hundreds of times more water than is needed to conduct hydraulic fracturing (fracking) operations to produce the same amount of energy from oil and gas, on a tiny fraction of the acreage. Where on this water-starved planet will that precious liquid come from?

Biofuel crops also require prodigious amounts of fertilizer and pesticides. And if organic and anti-GMO factions have their way, far more land would be needed, pest control would be minimal or done by hand, and fertilizer would come from human wastes and animal manure – raising even more complex issues.

To put it bluntly, a biofuel future would be totally and disastrously unsustainable.

There’s another deep, dark secret about biofuels. Somebody needs to tell Obama, McCarthy, Clinton, Sanders and their army of “green” supporters that biofuels are hydrocarbons! They are composed of carbon and hydrogen, though in less complex molecular structures than what we pull out of the ground – which means we get less energy per gallon. And when we burn them, they release carbon dioxide!

We have at least a century of untapped oil and natural gas right under our feet. To lock that up is utter insanity.

Even crazier, most anti-fossil-fuel zealots also oppose nuclear and hydroelectric power – and want future electricity generated primarily or solely with wind turbines and solar panels. To blanket our scenic, crop and wildlife lands with wind farms, solar installations and biofuel plantations – and destroy economies, jobs, living standards, health and welfare in the process – is nothing short of criminal.

Voters should demand to know exactly how they will make this happen. If they cannot or will not answer satisfactorily, a strong case can be made for the proposition that they are too ignorant and dishonest to hold office – and that their supporters are too stupid and anti-environment to vote.

Paul Driessen is senior policy analyst for the Committee For A Constructive Tomorrow (www.CFACT.org).

Editor’s Note: The irony of this methane madness, as pointed out by Energy In Depth, is that methane emissions from oil and gas have been declining, not increasing, and are well below previous estimates:

As EPA just begins to learn about the issue, we’d like to point out that the most recent peer-reviewed studies and some of the best data available – including data from the Environmental Defense Fund and EPA’s most recent draft Greenhouse Gas Inventory – show that methane emissions from natural gas development are already well below the threshold (3.2 percent“leakage” rate) at which scientists believe natural gas may lose its greenhouse gas advantage.

EPA may also wish to consult the Intergovernmental Panel on Climate Change (IPCC), which has said that even accounting for methane emissions, natural gas, brought about by fracking, is an “important reason” for the United States’ significant decline in emissions.

EPA claims that it is regulating methane to mitigate climate change, yet natural gas is the reason the United States has achieved dramatic reductions in greenhouse gases… 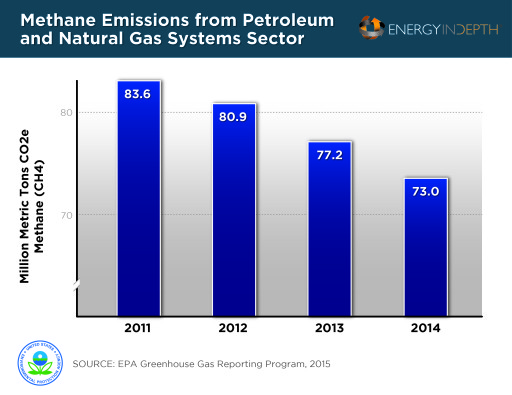 From Energy In Depth – Click to read full story