We all want green energy and as technology advances we’ll get more and more of it, but it’s time to stop the insanity of funding wildly uneconomic ventures.

One of our reader sent me an article yesterday indicating how irrational the push for green energy has become. Green energy is, of course, right up there with apple pie and motherhood as something to be desired and never criticized. We all want clean energy for as little cost as possible. Some folks, though, are determined to make and open the wine well before its time. They’re suckers for any scheme pursued with other people’s money (that of ratepayers and taxpayers) to advance it without regard for the economics. It’s time to stop the green energy insanity. 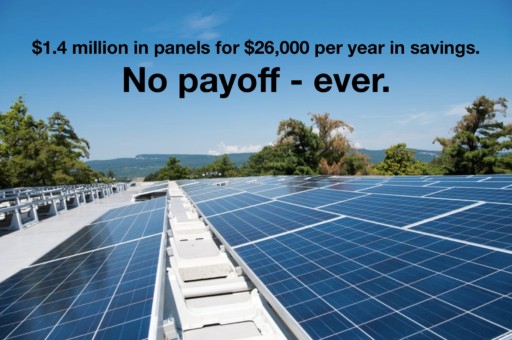 The story comes from Ulster County, New York, where the State University of New York (SUNY) at New Paltz celebrated the completion of a solar energy system. A Times-Herald-Record reporter recorded the event in an article titled “Solar project to power up SUNY New Paltz.” It was a typical fawning piece by an advocate journalist who obviously didn’t notice the absurdity staring him right in the face (emphasis added):

Standing inside, out of the rain, college President Donald Christian clipped the ceremonial blue ribbon to mark completion of the $1.4 million project. The array of solar panels stands atop the campus’ Elting gym and nearby Sojourner Truth Library.

Officials explained the battery system will store the solar electric power the campus does not use and then pump it out and back into the campus system when needed. That is an approach that is sure to gain use in the future, according to Alicia Barton, president and CEO of New York State Energy Research and Development Authority…

The new system is expected to generate 217 kilowatts of power, saving the campus about $26,000 a year on its electric bill. The campus will bear about $320,000 of the cost of the system, which was covered upfront by the New York State Power Authority…

Lt. Gov. Kathy Hochul recalled the comments at a dinner Tuesday night of former vice president and environmentalist Al Gore. He urged those at the dinner to do their part in protecting the environment, she said. “Today, at SUNY New Paltz, we are doing our part,” she said, “and that is something everyone in this room should be very proud of.”

Our alert reader, a small businessman who has to apply heavy doses of common sense just to survive, quickly calculated that $1.4 million divided by $26,000 per year means it will take 53 years and 10 months to get the ratepayer/taxpayer investment back. And, that’s before considering repairs, maintenance, declines in energy production from the panels or the cost of money, which means the system will never pay back anything remotely close to the cost.

Even the campus (mostly taxpayer) costs of $320,000 will take 23 years to return if we factor in a conservative 0.5% decline in energy production, an equal amount for maintenance and a discount rate of but 5%. The total subsidy from ratepayers and taxpayers at the end of 25 years is $1.4 million less the net present value of $333,800 in savings. That’s $1,066,200 or 76% of the project. There’s no payoff after 53 years, after a century or ever. Yet, “these are the people educating our kids,” says our reader.

He might have added these are also the people reporting the news and making government policy in New York so the Lt. Governor can brag about standing arm in arm with Al Gore. Some $1,080,000 of ratepayer/taxpayer money has been invested in this project. It will never return anything of significance, the savings but barely covering the cost of the college’s own investment. And, the environmental contribution? That’s also nothing compared to the role of natural gas in reducing emissions. Meanwhile, clean affordable low carbon natural gas beckons, and New York ignores it. It’s pure insanity, its a waste of money and delays the need of renewables to compete which is, ultimately, the way green energy will have to happen.

I’ll have more to say on this tomorrow with our “Best Picks of the Week,” sent by other readers but, in the meantime, can’t we just stop the insanity?