Special interests behind the fractivist movement have used Mark Ruffalo in a “Water Defense” scam that has turned out to be a water offense.

Mark Ruffalo, as we wrote here several months ago, may be America’s shallowest celebrity, although he was smart enough to rip off New York ratepayers and taxpayers for an expensive solar system in his second-home backyard that he could have easily afforded without any help. Mark Ruffalo has also been used by bigger players of the special interest game – players from the NRDC gang – to advance a scam taking advantage of the people of Flint, Michigan. They set him up as their patsy, as they do with any shallow celebrity willing to lend their pretty face to a scam masquerading as a moral cause. 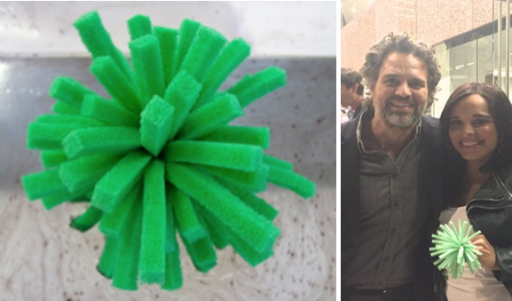 The story, which just appeared in Slate but builds on other work in the Huffington Post and elsewhere, speaks for itself in most respects. Titled “Mark Ruffalo Is Helping a Fake Scientist Use Flint to Promote His Sponge Business,” it details a sordid attempt by Ruffalo’s “Water Defense” outfit and its Chief Technology Officer & Investigator, Scott Smith, to take advantage of the Flint, Michigan water crisis by marketing  something called a “Waterbug” and another product called “Aquaflex” that can supposedly turn the water potable. The story is well worth reading and here is one of the key points it makes:

More than one actual scientist—including Marc Edwards, the Virginia Tech researcher who is in part responsible for exposing the Flint crisis in the first place, and a UMass expert that HuffPo spoke to—say the levels of “contaminants” that Water Defense claims to have found in Flint are not, at the moment, actually unusually high. (Edwards and others involved in the Flint Water Study activism group have written extensively about the questionable claims made by Smith and Ruffalo’s group. They believe that Water Defense may itself have helped cause a spike in gastrointestinal problems by convincing residents not to use tap water to shower or wash their hands, basic acts of hygiene that help prevent the spread of disease.)

More details are offered in a story (also linked above) entitled “In Flint Water Disaster Response, Ruffalo is a Bad Actor.” Nothing is held back about the nefarious role of the guy we’ve often referred to as “The Little Green Bully” for the fractivist hype that is such a big part of his celebrity marketing campaign. But, let’s be honest, Mark Ruffalo isn’t the real con man here. He’s just another useful idiot celebrity, like Leonard Dicaprio, latched onto by the NRDC gang to promote their special interests. They know putting shallow celebrity types out front feeds starved-for-attention celebrity egos and lets them do a bit of virtue signaling, while also advancing the personal interests of the gang under the cover of self-righteousness.

Fully appreciating this requires an understanding of what exactly “Water Defense” is. It was created as a not-for-profit corporation at the time the EPA was investigating Dimock and set itself up as an advocate group around the issue, later even delivering water to homes there, all as if it was Mark Ruffalo’s initiative, except that it wasn’t and still isn’t. He’s just the front man, duped by the NRDC gang. The application Water Defense, Inc. made for Federal tax exemption in 2014 (some two years after it claimed it was tax-exempt) tells the story. It identifies, on pages 28-29, four key people who serve as directors and officers. They include Mark Ruffalo, his accountant, his attorney and Ramsay Adams.

Ramsay Adams, of course, is the son of NRDC founder, John Adams, who’s tight with Larry Rockefeller and lives in the Beaverkill community the family created as a Catskill enclave for themselves and their friends. John also created the Open Space Institute (now headed by Rockefeller descendant Kim Ellian) and served as Joe Martens’ boss before, during and after his stint as DEC Commissioner. Finally, he set up his son Ramsay up with a make-believe job as Catskill Mountainkeeper, where he and Ramsay’s sister (Honeywell executive Katherine Adams) who also serves with Elliman on one of the other Rockefeller boards, could keep an eye on him.

Ramsay has many interests, among them being the Catskill Brewery, and he’s cultivated a relationship with Mark Ruffalo, putting him on his Catskill Mountainkeeper board. Ramsay Adams also now serves as the Executive Director of Water Defense, Inc. according to its website. 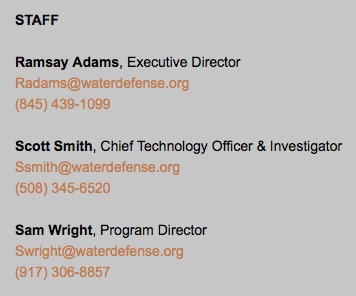 Screenshot from Water Defense, Inc. “About Us” web page

More to the point, the application to the IRS for tax-exemption was signed by Jay Halfon, the Fractivist Rasputin, who serves on the Park Foundation, 350.org and Earthworks boards, while also managing the Sustainable Markets Foundation for the Rockefellers and friends. He’s as tied into the NRDC gang as anyone could be, while operating mostly own the background. Halfon and the Foundation are, too, the conduit between these folks, the trial lawyer community and the radical PIRG enterprise – all designed to promote very special interests using an environmental/social justice theme. The Foundation also provided grants totaling  $161,250 to Water Defense, Inc. at the front end, which accounted for 98% of the organization’s revenue in 2012 (all but $3,875).

Yes, Water Defense, Inc. is another NRDC gang scam, with Mark Ruffalo putting himself out front as the face of the thing for public consumption. Once the EPA declared the Dimock water safe, Water Defense, Inc., essentially closed up shop, taking in no new revenue in 2013, and apparently shifted the focus to another different sort of scam. Someone brought in Scott Smith as “Chief Scientist” (his degree is apparently in business). Here’s a video of Smith doing some his proselytizing:

Who brought in Smith? Was it Ruffalo? Or, Ramsay Adams? That requires more investigation but enough is clear at this point to know one thing at least; Mark Ruffalo was used by Ramsay and/or Smith and he ought to shut up and go back to acting. No one’s taking him seriously at this point, especially the people of Flint, Michigan. He’s simply one more example of how special interests are using the fracking debate to advance their own personal agendas to the detriment of those for whom they deign to speak and the Upstate and Upper Delaware landowners they have deprived of any opportunity for economic development.