Mariner East Opponents played the demagogue and got a lot of press but they’re now gone and ET is still out there supporting communities.

Funny how it works, isn’t it, When someone is building something, the opponents, and politicians temporarily grafting their careers onto the cause, show up to seize the limelight and command the pulpit. When the battle is over, though, the opponents and pols move on to new causes and the builder becomes part of the community. Mariner East opponents serve to demonstrate. The pipeline is built and they’re suddenly nowhere to be found, but Energy Transfer, ET for short, didn’t go home. It has become an integral element of the  community, helping communities by spending money on them. Moreover, it is ET’s money, unlike other people’s money the pols are always spending.

When is the last time you read a story about the Clean Air Council helping a volunteer fire or ambulance company? Or, the Delaware Riverkeeper? Or, any of these phony gentry class Mariner East opponents? You don’t remember, of course, because they don’t do it. They’re not builders. They’re destroyers.

ET is a builder, though; a builder of not only pipelines but also its host communities. Consider the following:

“Energy Transfer recently granted $29,931 to the Rocky Run Fire Company, which provides emergency services to Middletown Township and its surrounding communities, to aid in the purchase of equipment to enhance the fire company’s response capabilities.” 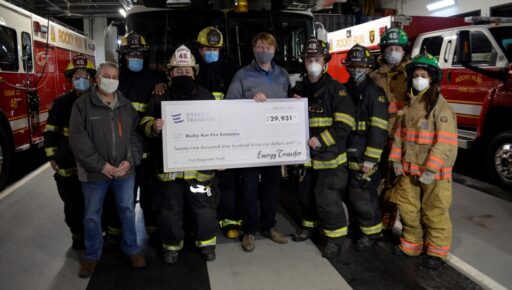 I see Joe McGinn, Energy Transfer’s Vice President of Public Affairs, in the picture but I don’t see any of the Mariner East opponents or their erstwhile political allies. Do you?

The Keystone Regional Fire & Rescue Department (formerly the Cresson and Lilly Volunteer Fire Departments) accepted a grant in the amount of $10,000 from Energy Transfer, which aided in the purchase of emergency radios to enhance the department’s communications capabilities…

“This grant will help us make much-needed upgrades to our communications system, which is a huge expenditure, especially after losing revenue due to the pandemic,” said Keystone Regional Fire & Rescue President David Henry Fulton. “Emergency responders in Cambria County have unfortunately experienced ongoing radio issues, and Energy Transfer is helping us take a big step in enhancing our equipment to better protect our community.”

ET is still here, though, and it’s not only first responders or Pennsylvania that has benefitted, but others as well:

Mercy Street Sports, the sports ministry of Dallas-based Mercy Street, a Christian based non-profit organization, today announced plans to break ground on a nearly $1 million soccer complex in West Dallas. The official groundbreaking ceremony will be held Wednesday, March 1 at 4:00 p.m. at 3500 Goldman Street, Dallas, TX 75212. The new facility will feature one regular-size soccer field and two futsal fields and will allow Mercy Street to further its mission to provide safe after-school activities to the children of West Dallas.

And, there’s this, also from Texas:

Parkland Foundation has been selected as the beneficiary of the Dallas Healthcare Heroes campaign, presented by Energy Transfer and developed by Dallas-based DHD Films, to compile the world’s largest video collection of appreciation messages for frontline healthcare workers.

For every video submitted, Energy Transfer will donate $50 to Parkland’s Public Health Preparedness Fund, up to a total of $100,000.

The Public Health Preparedness Fund will help Parkland respond to the most urgent needs that come with delivering quality, compassionate care in Dallas County during the current COVID-19 pandemic, while also building the capacity for Parkland to make an immediate impact locally when the next public health emergency arises.

This, also from Texas:

Dallas-based ETP, a master limited partnership with one of the largest and most diversified energy portfolios in the U.S., and its employees have given $2.5 million to MD Anderson since 2014. These funds have supported key pediatric cancer research initiatives.

“It is critical that we find a cure for pediatric cancer,” says Gorlick. “Cancer is the No. 1 cause of death in children due to disease, and currently only 3% of funding goes into pediatric cancer research. This donation will help fill a large gap of what’s needed to treat young patients.”

And, from back in Pennsylvania, there’s this, with no Mariner East opponents anywhere in sight as the money is being offered:

Special Olympics Pennsylvania (SOPA) today announced a three-year partnership that will recognize Energy Transfer as its Law Enforcement Torch Run (LETR) Guardians of the Flame Premier Sponsor.  LETR, the largest public awareness vehicle and grass-roots fundraiser for Special Olympics, is changing the future for people with intellectual disabilities and lighting the way for acceptance and inclusion.

Energy Transfer will donate a total of $450,000 over a three-year period to further SOPA’s mission to broaden the opportunities for people with intellectual disabilities.

So, what we see here is a very generous company that remains in the community long after the building is done; a responsible corporate citizen. Where are the Mariner East opponents? Well, if not searching for a new cause, they are already out fund-raising on wha they claim to have accomplished in their futile attempt to frustrate the community building of others. That’s the way they rumble, but ET stayed and continues to support those who host its projects.