Pennsylvania’s Marcellus Shale success has been a thing to behold but Tom Wolf’s severance tax threatens an industry already suffering from low prices.

Cabot is happy to introduce a series of podcasts by George Stark, External Affairs Director They are intended to keep the public updated on the current energy industry and the business environment surrounding it in light of the possibility of Governor Tom Wolf’s proposed severance Tax on the natural gas industry in Pennsylvania. These podcasts shed some light on Pennsylvania’s natural gas industry struggles, which would only worsen with an additional tax imposed on it.

Highlighted in the first podcast are the struggles of local oil and gas companies such as EQT Corporation, Cabot Oil & Gas Corporation, CONSOL Energy, Range Resources Corporation, and Southwestern Energy. For example, CONSOL Energy recently announced layoffs of more than 10 percent of its workers, Range Resources will cut its rig count by 15 to 6 by the end of the year and Southwestern Energy’s revenue fell 26 percent. The recent poor market conditions and low gas prices have caused these companies to lose profits, resulting in fewer investments and more layoffs throughout the Commonwealth and the entire country.

An additional Severance Tax on the industry would only do more to weaken the already struggling industry, which would affect us all.  Instead of raising unnecessary taxes on a vital industry, lawmakers should focus on how to harness our energy industry’s resources and help to make the business conditions favorable for it to succeed.

In the second volume of Cabot’s podcast series, Stark highlights the stress that the energy industry has been under recently when it comes to capital expenditures. Poor market conditions that lead to company layoff and a drop in well counts contribute to overall net losses for the natural gas companies in the Commonwealth causing capital expenditure reductions.

As noted above, several big companies in Pennsylvania have been experiencing rough business conditions leading them to spend less. For example, Cabot Oil & Gas Corporation is spending 44% less in 2015 than it did in 2014, which means that much less investment in the Commonwealth’s economy. Range Resources Corporation also cut its capital expenditure spending by 40% since last year.

You can see all the facts and figures in this infographic prepared by NaturalGasNOW: 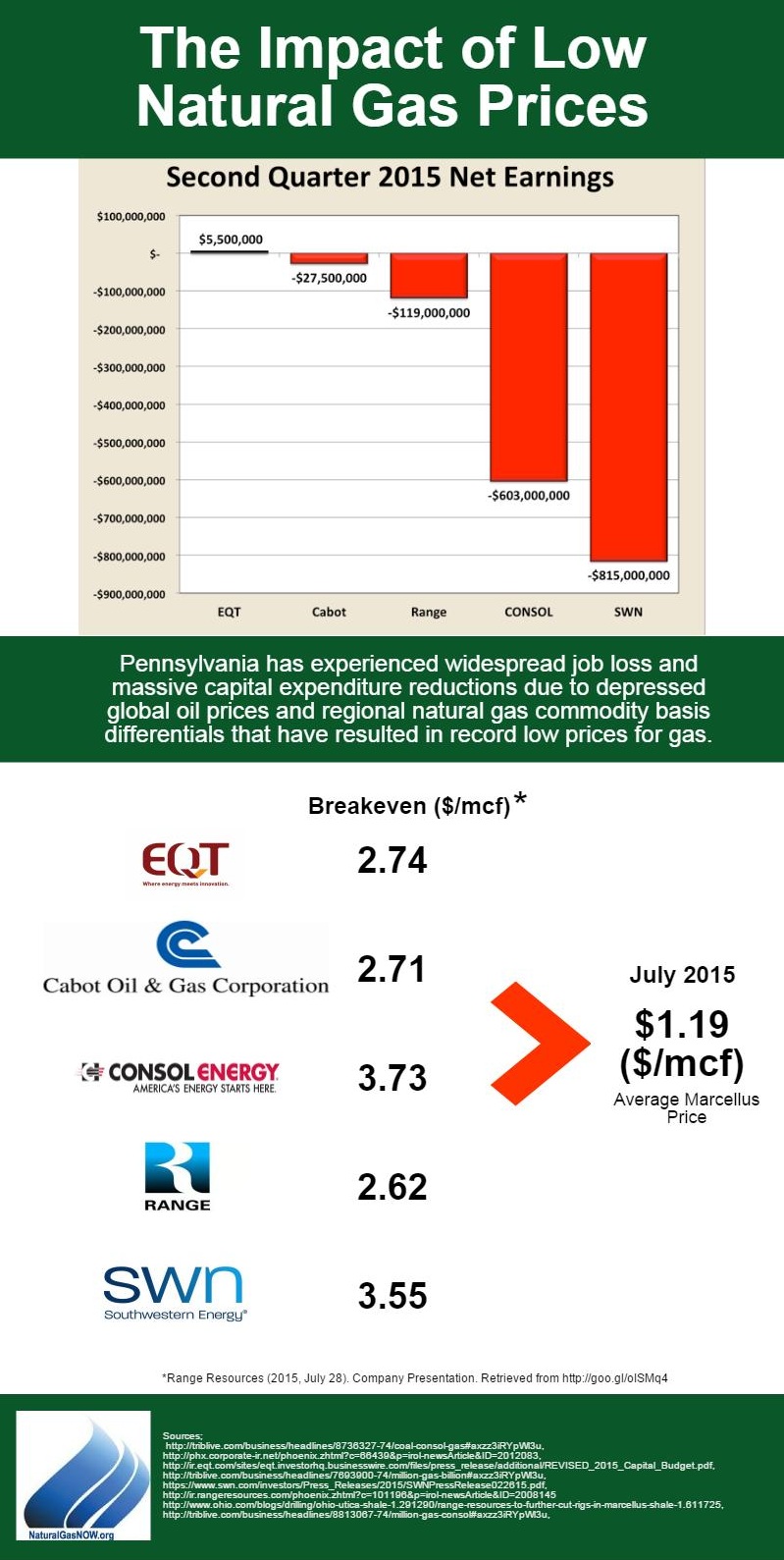 The natural gas industry struggles are not only reflective of its own success but also the success of everyone around them. Less capital expenditure means less investment in the community as a whole. A severance tax on the industry couldn’t come at a more difficult time and threatens everyone who has benefited from the industry. It’s time for Governor Wolf to push the reset button on his severance tax.

Original version of this post appeared on Well Said Cabot. See, too, our Severance Tax site on Tumblr.