A new research report prepared for investors indicates the Marcellus Shale is a huge success story from both a production and profit perspective, leading the way among all shale plays.

Yesterday, Bank of America Merrill Lynch put out their latest version of the Global Energy Weekly (GEW) and it includes some powerful information about what’s happening in the Marcellus Shale play, where production is building while other plays have been battered by low prices. It’s a research report for subscribers and does a thorough analysis of natural gas development and pricing trends. This issue partly focuses on the Marcellus Shale as the star performer among shale plays, and for good reason because the production and economics of this shale gas play are impressive and contradict the doom and gloom of the naysayers both within and outside the industry.

Let’s start with this very revealing chart plotting dry gas production.  It is developed from Energy Information Administration (EIA) data and a similar chart is presented in the GEW report: 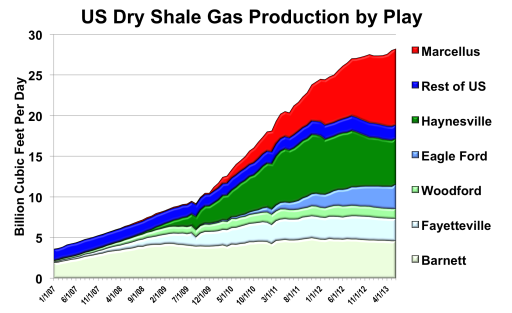 Notice how production for all the other dry shale gas plays combined (all the cool colors) have stayed essentially flat since late 2011 and even declined slightly in recent months. The only play among that group to show significant growth is Eagle Ford and that’s offset by declines in the Haynesville.  The Marcellus Shale play (in red) has continued to swell and rather substantially.  It is now the heaviest producing dry gas play by far, with 9.3 billion cubic feet of gas being produced per day (bcf/d) as of June 1, 2013.  The closest competitor is the Haynesville, which only produces 5.6 bcf/d. Here are some other key facts:

The report also notes there are thousands of drilled Marcellus Shale wells not yet producing because they still lack pipeline connections, but the pipelines are coming and ensuring future growth in production for the play as well as the capacity to ship gas to points south and Midwest in a reversal of the normal flow direction.

The Marcellus Shale is, in other words, a star performer, even during times of low gas prices.  It isn’t going away; no matter how strenuously antis muster ever smaller crowds of anti-development folks to state capitols or otherwise make noise.  It’s all a mere distraction from the much bigger event, which is the total reshaping of the US energy picture in a very positive way.