Finally. Finally! Finally!!! The very first cargo of Marcellus Shale gas has been liquefied, loaded and as of Sunday night, set sail from Dominion’s Cove Point LNG plant, heading for we’re not sure where yet. We’ve waited YEARS for this day! Let’s pop the cork on a bottle of the bubbly and celebrate. 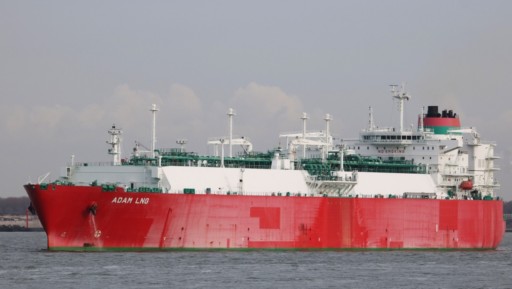 Last week MDN told you that a ship called the Patris was due to dock at Cove Point and load the first shipment of Marcellus molecules. It appears that information was incorrect. It was correct at the time! Either the Patris was redirected somewhere else, or we’re not sure what happened.

But, news has just broken that late Sunday night, close to midnight, a ship by the name of Adam departed Cove Point loaded with the very first Marcellus shipment. Several more ships are said to be headed for Cove Point now.

International shipping isn’t our specialty, so we won’t quote chapter and verse for which ships and when. This first shipment that left Sunday belongs to Japan, but there’s no indication it will actually go to Japan.

When we hear where the first Marcellus cargo lands, we’ll let you know. In the meantime, here’s the information we can find about the very first load of Marcellus Shale gas to get exported from Cove Point.

The cargo is expected to act as a drag on spot LNG prices as it coincides with the resumption of exports of the fuel from the Papua New Guinea LNG plant, which had been shut following a powerful earthquake.

The 160,000-cubic meter LNG tanker Adam LNG left Cove Point on Monday with a draft of 91 percent, suggesting it was full, according to the data. Its destination was not immediately clear.

The facility has exported two commissioning or test cargoes already, which were sold to Royal Dutch Shell. The first cargo from the facility left the terminal in early March heading for Britain’s Dragon LNG terminal.

Dominion Energy was not immediately available for comment outside operating hours.

But the company said last week the terminal had entered commercial service for natural gas liquefaction and exports.

After completing a planned outage for maintenance, the facility has been ramping up to full production of LNG from natural gas provided by its export customers since late March, the company said.

Cove Point is the second LNG export plant in the lower 48 U.S. states after Cheniere Energy Inc’s Sabine Pass terminal in Louisiana, which exported its first cargo in February, 2016.

Dominion sold the project’s capacity for 20 years to a subsidiary of GAIL (India) Ltd and to ST Cove Point, a joint venture of units of Japanese trading company Sumitomo Corp and Tokyo Gas Co Ltd.

Some of the LNG for ST Cove Point will go to Tokyo Gas and some will go to Kansai Electric Power Co Inc, according to Sumitomo’s Pacific Summit Energy (PSE) unit.

A Dominion spokesman did not immediately respond to a request for comment Monday. The company said last week that commercial service had started, though it did not disclose when the first cargo under long-term contracts with Gail India and a joint venture of Sumitomo Corporation and Tokyo Gas would be exported. Shell had a deal to export all of Cove Point’s commissioning cargoes, suggesting the cargo that left aboard the Adam was a commercial delivery.

Cove Point feedgas flows have rebounded to a high of 616 MMcf/d for Monday from the recent low of 163 MMcf/d on Thursday and an average of 535 MMcf/d over the last four days, S&P Global Platts Analytics data shows. As of now, the Adam is heading back to where it came from, the Suez Canal. Cove Point is still expecting two more unladen vessels in the coming week as the Kawasaki Sakaide and the Meridian Spirit continue to travel toward the plant with an estimated arrival of April 19 and 21, respectively.

Editor’s Note: And, off we go into a bright new future for Marcellus Shale and the communities benefitting by it. Hail to the future!