Our Marcellus Shale gas from Pennsylvania and West Virginia provides the LNG leverage needed by Europeans to curb Russian aggression against Ukraine.

The simmering dispute over waterway rights between Ukraine and Russia broke into armed conflict this week. Its implications are enormous both for the energy world as a whole and especially for us in the Marcellus Shale region. But some background is required to appreciate the connection. 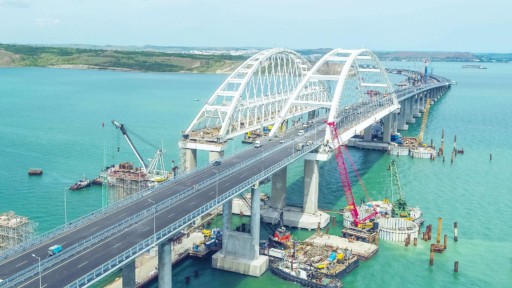 Eager to connect the Crimea to the Russian mainland, Putin ordered the building of a 12 mile bridge over the Kerch Strait after the annexation, which he formally opened himself this year in May by driving a truck across it. Russia then placed more armed vessels in the waters around the bridge. The Russians claimed they needed better security. In practice, the extra traffic increased delays to ships trying to access and use the Ukrainian ports on the Azov Sea, increasing the costs of doing business there and undermining the utility of these ports in international trade.

Ukraine responded with a military show of force, but this was overwhelmed by Russian naval power. Russia then used the supports of the bridge, which had been built at a strategic distance, to permit its own warships to blockade the Ukrainian ports. Weaker militarily, Ukraine has few cards left to play and access to its Azov Sea ports is now very much under Russian de facto control.

As I noted in July, during the controversy over the Nord Stream II pipeline that Germany is building with Russia and which will bypass Ukraine and Poland, Ukraine currently gets over 2% of its GDP from transfer payments for the trans-shipments of Russian gas and oil to Western Europe. Thanks to Angela Merkel, that transport route may become irrelevant. Nord Stream II brings Putin’s dreams of Russia once again dominating Eastern Europe one step closer.

However, more than just Ukraine’s loss of access to its ports and its lost revenue from diverted oil and gas trans-shipments, thanks to this new pipeline Russia can cut off energy supplies to Poland, Ukraine and the Baltic States any time it wishes, without worrying that Western Europe will react harshly as their supplies are also cut off. While economically in the short term this direct pipeline access to Russian gas and oil may be better for Germany, Nord Stream II is a geo-political disaster due to its implications for further expansion of Russian power and influence over former Soviet states, if not more globally.

For these reasons, President Trump was right in calling the Germans out on the new pipeline at the NATO summit in July. However, the President has not been forthcoming with an appropriate condemnation of Russia’s actions, leaving our allies confused and leaving UN Secretary Nikki Haley to act as the lone Voice of America while the President – inexplicably but not unexpectedly – dithers on calling Putin out for what is obviously going on.

Meanwhile, with Putin again showing his aggressive nature, the rest of the West is scrambling.  Cyprus, Israel, Greece and Italy agreed this week to build a $7B pipeline for the Eastern Mediterranean from the Leviathan Field in the Mediterranean Sea. Germany, perhaps belatedly realizing the folly of putting all of its energy eggs in Putin’s basket, now is partnering with Dow Chemical also to build a liquefied natural gas import facility in the German city of Strade, near Hamburg.

Who will supply the gas to feed Western Europe should Russia turn out to be unreliable or if Nord Stream II becomes another pawn on Putin’s chess board to regained Soviet dominance?

It could and should be us from right here in the Marcellus.

By building out our pipeline system in the US, we can supply Strade and other future European gas import terminals, thereby helping thwart Putin’s aggression, and projecting American “soft power” – which is what critics of an aggressive American foreign policy often demand. At the very least, this will help keep American troops out of harm’s way, but it could also serve as a geopolitical foil to Russia’s attempts to use its energy largesse for political, military, and evident expansion purposes.

Will we have the political will to do it?

In order to do so, the natural gas industry in this country must first recognize the strategic reasons why this is important which, in turn, requires understanding the interconnections between domestic energy policy, international trade, and political, military, and diplomatic events in far away places.

Few Americans presently understand how Russian moves in the Azov Sea could eventually end up causing young men and women in Pennsylvania, West Virginia, Ohio and elsewhere to be sent overseas in military uniforms. Fewer still comprehend how the pipeline build out and export terminals in this country can help (1) secure our future militarily while simultaneously (2) creating good jobs for people in our region and (3) decreasing greenhouse gas emissions worldwide. None will understand if they are not told.

Tom Wolf just won reelection handily as Governor of Pennsylvania. He is no friend of the natural gas industry. Unlike his counterparts in New York and Maryland, however, he hasn’t moved to try to shut it down. There will be more pressure on him to do so now that the National Climate Assessment has been released.

Wolf, though, lives in the real world. He must perform for Pennsylvanians. Strange as it sounds, the Governor and the industry need each other. The gas industry has to provide him with the explanation as to why working with the it not only is in Wolf’s own best interests politically but is also in the best interests of all Pennsylvanians, and indeed all Americans. Somehow this message has not gotten through as forcefully as it should.

Further, our newly elected representatives from the Marcellus States in their state legislatures and in the United States Congress must understand – and not be hesitant to educate the public about – the international dynamic. Some, like Chrissy Houlahan of my home district in Southeastern Pennsylvania, are military veterans who have dealt with the intricacies of international relations. Others are untested. It will be up to all of them to work to keep American men and women safe. It will be up to all of us involved with the industry to explain how it can be instrumental – indeed, strategically essential – in doing so.

Meanwhile, Vladimir Putin will be watching, waiting, and planning his next chess move.