The Federal Energy Regulatory Commission (FERC) gave finally approval for the construction of the much needed PennEast Pipeline. The approval could not have come at a better time. After a two week cold snap, which pushed natural gas prices up, the PennEast Pipeline will be able to deliver reliable and affordable energy to families and businesses. 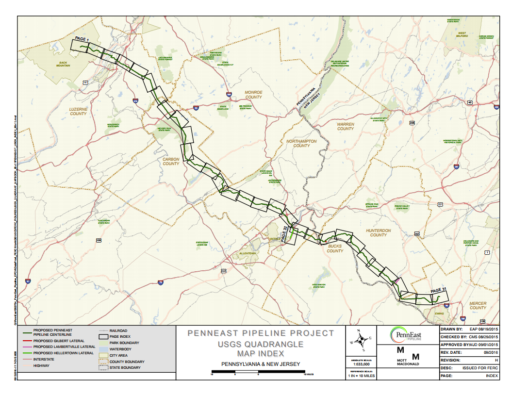 (Wyomissing, Pa.) – After incorporating the feedback from landowners, public officials, regulators and other stakeholders over the last three years as part of a concerted effort to include community input and reduce environmental impacts, the Federal Energy Regulatory Commission (FERC) recognized the clear need for, and public benefit of, the PennEast Pipeline and today issued an Order under section 7(c) of the Natural Gas Act approving its construction.

The approval comes two weeks after a severe regional cold spell that forced natural gas prices in New Jersey to skyrocket 31 times above the low-cost gas supplies that PennEast will access.

“Approval of the PennEast Pipeline is a major victory for New Jersey and Pennsylvania families and businesses,” said Anthony Cox, Chair of the PennEast Pipeline Company LLC Board of Managers. “They will reap the benefits of accessing one of the most affordable and abundant supplies of natural gas in all of North America. PennEast will lower gas and electricity costs, increase reliability, improve air quality, and make the region more competitive for jobs in the coming decades.”

The approximately 120-mile pipeline route begins in the Marcellus Shale production area near Dallas, Pennsylvania, and connects with the existing underground Transcontinental Pipeline near Pennington, New Jersey. The route includes 24 municipalities in Pennsylvania and six in New Jersey.

“We appreciate the dedication, time and work of FERC staff and the Commissioners to collect extensive public input and ensure the Project met a clear public need while minimizing environmental impacts,” added Cox. “We also thank the countless business and labor organizations from across two states, as well as dozens of bipartisan elected officials. Together, they understand the importance of the PennEast Pipeline, which will spur job growth, aid business retention and provide a dedicated and reliable fuel supply for the future.”

“PennEast is one of the most important private infrastructure projects in America, and will not only create thousands of jobs during construction, but also will provide a critical ingredient for a vibrant, growing economy with modern energy infrastructure,” said Ray Pocino, Vice President and Eastern Regional Manager of the Laborers’ International Union of North America. “Modern pipelines are state-of-the-art infrastructure projects built by the highest quality professionals and are the safest way to move energy. As a resident near the route, I have every confidence in its safe operation.”

“PennEast Pipeline’s approval, granted after extensive reviews, demonstrates that we can balance economic growth with environmental protection by powering businesses and jobs with affordable, reliable energy that has been proven by federal data to reduce carbon emissions,” said Gene Barr, CEO of Pennsylvania Chamber of Business & Industry. “Businesses and families need this project to continue moving forward as soon as possible.”

The need for the PennEast Pipeline is clear. Access to additional natural gas supplies via PennEast Pipeline will reduce the cost of gas in eastern Pennsylvania and New Jersey, even during non-peak periods. Natural gas prices in the market areas worsen during periods of peak demand, such as the sustained recent cold snap, where natural gas prices spiked 31 times higher in New Jersey than supplies in the Pennsylvania production areas. This is due to pipeline constraints and inadequate supply to meet demand.

One preliminary estimate found that during a 10-day period alone, the PennEast Pipeline would have saved the region more than $300 million if it had been in service in November as originally contemplated. Even during non-peak periods, such as October, prices in New Jersey were triple those in Pennsylvania.

Since 2005, natural gas use has more than doubled in New Jersey and increased five-fold in Pennsylvania for electric generation. As a result, carbon emissions are dropping to their lowest level in nearly three decades while air quality has improved across the region. A diverse fuel supply and the reliability of the electric grid are the primary reasons PJM Interconnection, the largest electric grid operator in the world, cited in an October 2016 report to FERC that the PennEast Pipeline is needed for grid reliability.

“This is a big win for New Jersey businesses, particularly energy-intensive sectors such as manufacturing, to have a long-term, reliable, and affordable fuel supply that makes the region more attractive for business growth and jobs,” said Michele Siekerka, President of the New Jersey Business and Industry Association. “The closures of Oyster Creek and two major coal plants in the area demonstrate the need and desire for more affordable natural gas that protects our environment with stable, 24/7 fuel supplies.”

FERC issued its Draft Environmental Impact Statement (EIS) first under the Obama Administration in July 2016, and finalized its recommendations after nearly nine months of additional public input. The Final EIS in April 2017 affirmed that construction and operation of the PennEast Pipeline would have minimal environmental impact, which would be reduced to “less than significant levels” with PennEast’s and FERC’s mitigation measures. The Pennsylvania Department of Environmental Protection under Democrat Governor Tom Wolf issued its 401 Water Quality Certification in February, and in May, the United States Environmental Protection Agency Region 3 added that the Final EIS included “improved safeguards for the protection of human health and the environment.”

Additionally, the PennEast Pipeline Company updated its estimated in-service date to 2019, with construction still beginning in 2018. The original project timeline allowed for many variables, though did not anticipate the many months without a voting quorum at FERC.

“In the coming days, we will work to finalize fair and positive compensation agreements with landowners,” added Cox “In the weeks ahead,  survey crews will collect remaining field data in support of our permit applications to ensure minimal environmental and community impact. We look forward to continuing our work with state, bi-state and regional permitting agencies and expect those permit reviews to be conducted on the merits of the application, without outside interference.”

This is great news for the people in Pennsylvania and New Jersey!