Emmanuel Macron took the elitist path on climate change and it was an utter disaster. Ironically, there was a much better way — the US way. He blew it.

Most Americans are probably just hearing about the ongoing protests in France after images of rioting around the Arc de Triomphe in Paris this past weekend finally forced the topic onto the front page. The nationwide protests, now in their third week, had previously garnered little coverage outside France, and what limited mention was made often obscured the source of anger driving the protests with vague references to “rising fuel prices.”

Since this weekend, international media has reluctantly gotten closer to identifying the root cause, citing “rising taxes.” But this is not just any old tax protest, it is targeted at a very specific kind of tax: namely, a carbon tax. 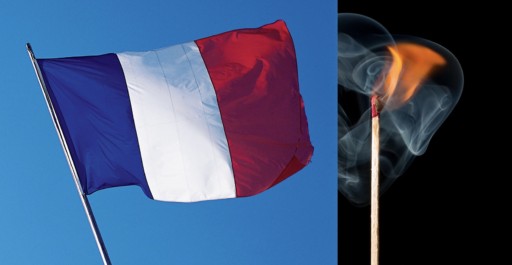 The protests in France, which despite the focus on Paris have been overwhelmingly peaceful and span the entire country, should be considered another data point in the building backlash to the international green agenda of forcing energy prices higher.

See the media references to rising fuel prices and rising taxes are correct in a sense, even if they don’t tell the whole story. The protest is specifically against rising fuel taxes, a previous increase imposed by President Emmanuel Macron last year, and the further increase scheduled for January 1st, 2019. Hence the name given to the protesters, the gilets jaunes, “yellow vests,” which are required emergency equipment for every car in France and thus a symbol of being a car owner.

The January tax increases would have been the been the equivalent of 30 cents a gallon for diesel (around half of cars in France are diesel) and about 10 cents per gallon for regular gasoline.  This is on top of tax increases already enacted for 2018 and with additional tax increases scheduled into the future. These tax increases have been explicitly billed by Macron as a means to meet France’s commitments under the Paris climate treaty, making fuel more costly in an effort to reduce consumption and the carbon dioxide emissions associated with that consumption.

The problem is that outside the density and mass transit of Paris and other large cities, in large swaths of rural France there is no option but to drive a car. Sales taxes already make up 60% of the price of fuel in France, which has among the highest fuel prices in Europe, and most of the main trunk roads in the country exact steep tolls.

Layering even more costs on these car-dependent regions, which are also less financially well off than glittering urban centers like Paris, has finally pushed many French to the breaking point. And it’s not just the tens of thousands of protesters standing alone: polling has found more than 75% of the French population support the protests.

While the revolt seems to have taken Macron and other green elites by surprise, it shouldn’t have. Polling on carbon taxes has found pretty consistent results: people may vaguely support action to reduce carbon dioxide emissions (not surprising considering the media relentlessly hammers CO2 as evil and dangerous), but when asked how much they would be personally willing to pay in higher gas or electricity bills, the overwhelming response is little to nothing. In France, we are seeing these preferences play out in the streets as drivers object to paying the cost of green ideology.

The focus on the images of rioting in Paris is understandable, but it also paints a picture of violent urban street protests, when most of the past few weeks of tax revolt have been nothing of the sort. The protests have been dozens of people blocking a roundabout to slow traffic, creating an atmosphere reminiscent of a neighborhood block party.

Or, it’s been groups of people taking over toll plazas and, in a direct rebuke to the tax hikers, waving vehicles through without paying the toll (which saved this grateful correspondent a few tens of euros while driving through northern France on the first weekend of the protests). It has been the very definition of a spontaneous, widespread grassroots uprising.

It is appropriate that these protests burst onto the scene just before the latest climate confab began in Poland. The green elite has gathered to work out how to actually implement the Paris climate treaty that was so showily inaugurated in 2015. The protests should be a hint to the delegates in Poland: the people are not on their side. Energy supplies are crucial to the flourishing of modern humans, a true necessity.

While Macron and other green elites in the salons of Paris may barely notice higher gas or electricity prices, the poor and middle class feel the pinch acutely. And they are increasingly waking up to the source of their pain: the type of green engineering epitomized by the Paris climate treaty. And the costs of the implementation of that treaty have barely even begun to be felt.

Whether ballot initiatives in Washington state, provincial elections in Canada, or now protests in France, when the people weigh in on carbon taxes there is a common answer: Non! Are the delegates in Poland listening yet?

Editor’s Note: Macron could have done it a much better way, by emulating US policies on natural gas (and, by extension, fracking), policies that have dramatically impacted CO2 emissions in a way no European nation has been able to match in overall impact. Instead, he went for political correctness and the global scheme to impose a carbon tax that would have served as a bottomless slush fund for financing corporatist green energy scams. The needs and wants of commoners weren’t even a factor. They were shunted aside to push the slush fund so as to enrich the Simons family and other hedge fund folks who hope to abscond with trillions of dollars in such scams. There are billions invested in making it happen but even that wasn’t enough when the French realized the price of political correctness.

Ironically, natural gas would be far less impacted by a carbon tax than other energy sectors, but that isn’t the point. If Macron wants to get it correct and do something meaningful about reducing carbon, he’ll reexamine the premises of the carbon tax and let the free market work. The problem with the carbon tax is that it involves government picking of winners and losers and an incentive to do what hasn’t worked nearly as well as natural gas. He’ll also get on board with developing natural gas, nuclear and other resources to achieve a balanced energy portfolio that doesn’t require subsidies designed to enrich scammers. Enough corporatism already!