Lynbrook, New York, is getting its act together on natural gas. They’re getting behind the Northeast Supply Enhancement pipeline project with a rally!

Earlier this month I wrote about how “maddening [it was] watching New Yorkers debate how to solve their natural gas problem or, more precisely, their lack of natural gas capacity.” I said I wanted to scream ‘It’s your governor, stupid.'” Since then, though, Lynbrook, Long Island, the subject of my post, seems to gotten serious. I must say I’m impressed. They seem to now understand what must happen, although I have a few additional suggestions.

As often is the case, one of our readers put me onto the new direction in Lynbrook. Instead of whining and playing the victim they’re getting into the fight, as this notice he sent me illustrates: 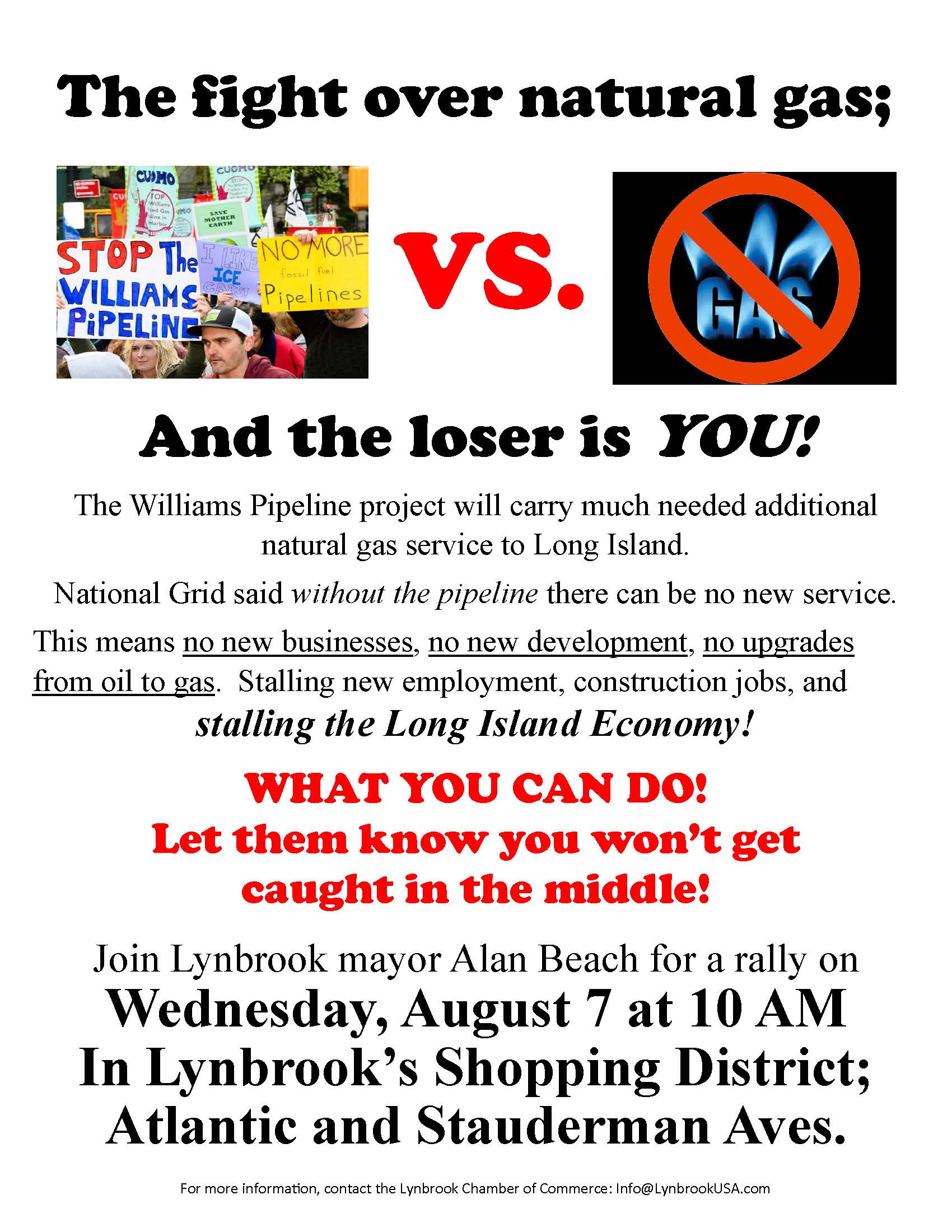 Not only is a rally planned, but the Village of Lynbrook is encouraging residents to write to New York State DEC to support the Northeast Supply Enhancement (NESE) pipeline project. Here it is, along with instructions and a printable pdf version may be found here:

This critical infrastructure project will provide National Grid’s service territory in Brooklyn, Queens, and Long Island with much needed gas supply which is vital to customers, the environment and the economic viability of our region.

Downtown mixed use projects, affordable housing developments, and the opening of new small businesses are at risk of being delayed or denied if this infrastructure project does not move forward on a timely basis.

This project could not come at a more crucial time for New York, as it experiences significant economic growth. Increasing the availability of cleaner, more reliable energy to meet demand will allow the region to sustain and build on its positive momentum.

That’s a pretty good letter and it’s going to the correct place. Remember, Andrew Cuomo, doesn’t really care what happens with the NESE pipeline. He just wants credit for trying to delaying, modifying or killing it. He’s already accomplished some of that and lots of letters to DEC will make it appear he had no choice but to finally approve it after securing some additional concession. But, if he doesn’t get many letters, he can still accomplish his goals through a court overruling him, but that will mean much delay and more harm to Lynbrook. It’s far better to fight now.

The letters are good politics and the rally is even better. Still, I have a few suggestions for additional activities. One would be a legal protest in front of the nearest DEC office. There’s one at 50 Circle Road, Stony Brook, New York. Make sure all media know about it in advance. If that doesn’t appeal, try the Empire State Development office at 150 Motor Parkway, Hauppauge, New York. They’re responsible for economic development, after all.

Another and, perhaps more appropriate, protest location would be at Food & Water Watch’s office in nearby Brooklyn. After all, they’re orchestrating most of the hurt on Lynbrook as this web page illustrates. Their office is located at:

The building, of course, is heated with natural gas, according to New York City DEP boiler records, although they have the option of burning No. 2 fuel oil. Natural gas is the much cleaner fuel, of course, but if you think Hoof & Mouth Watch wants to be sure there’s plenty of gas so as to have avoid oil use, you’re wrong. They’re only interested in an ideological war against gas for various selfish reasons and they’ve already got their gas. It’s Lynbrook that’s paying the price here.

Some op-ed pieces in local and, especially, Albany media, of course. Overall, the message needs to be similar to the above letter and target those responsible for this fiasco. That includes the Governor and, in particular, the forces pushing him in the other direction. And, Hoof & Mouth Watch isn’t the only one. Here are some of them:

These are Lynbrook’s enemies. The Governor has been listening to them because groups such as 350.org are financed by the highly influential Rockefeller family. It’s time for Lynbrook to fight back.