Fractivist shill Sandra Steingraber is flustered with our victory over the DRBC and doing stupid analogy tricks to demonstrate how just how shallow she is.

“Look at me” Sandra Steingraber is quite proud of herself. She begins her story on her website describing herself as “acclaimed ecologist and author.” It’s hard to argue the “acclaimed” is not deserved, though, considering the way she brazenly defied all academic standards to peer-review the work of other fractivists for the sake of furthering Governor Corruptocrat’s plundering of Upstate landowners with his fracking ban. She’s most definitely a heroine in her own mind. She makes a point, in fact, of always identifying herself as “Dr.” Sandra Steingraber, which is what not so smart academics do to prove they’re really smart. But, she’s not, as her recent stupid analogies trick demonstrates.

What I’m talking are these two Tweets yesterday from Sandra Steingraber: 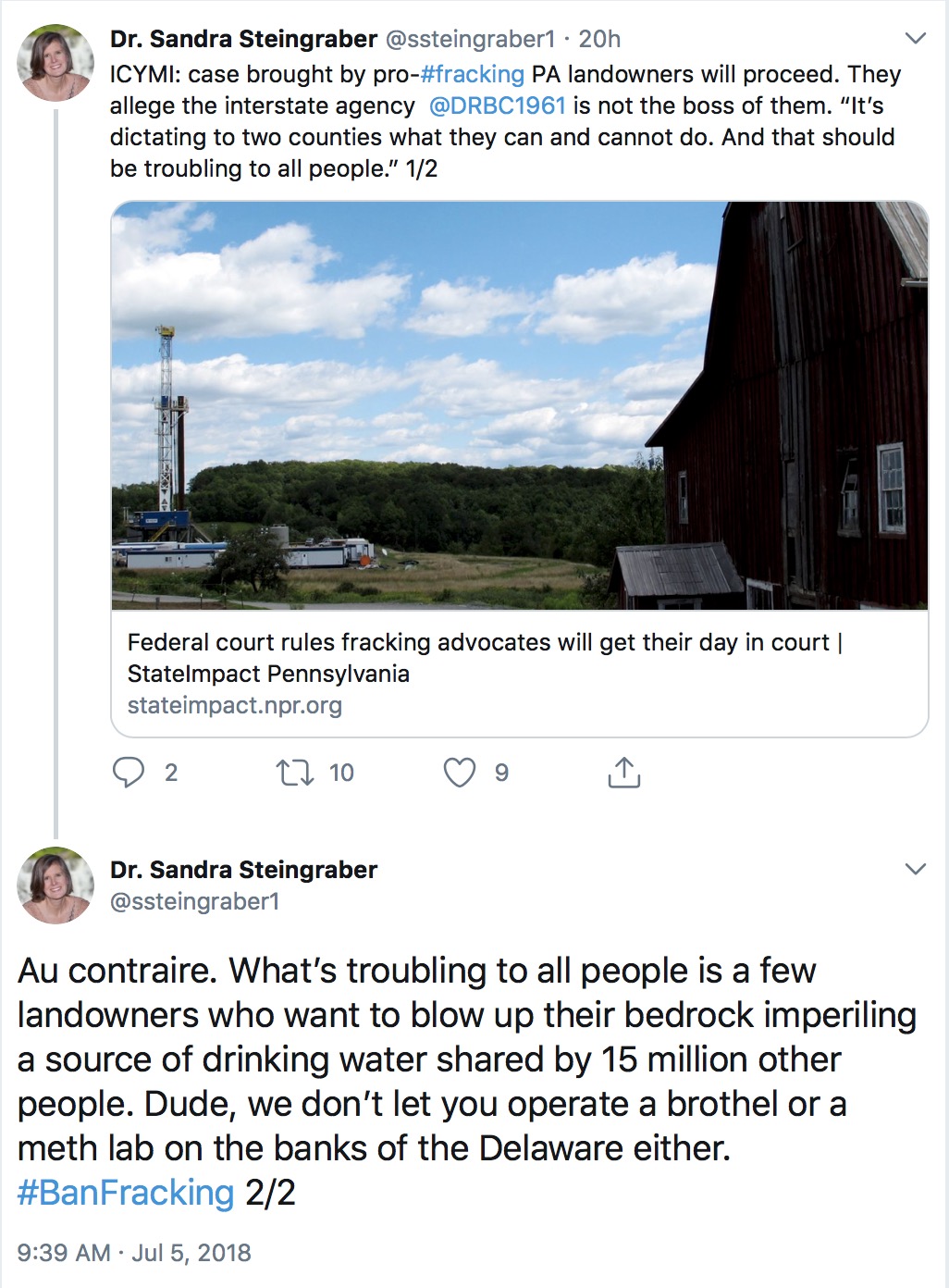 Let me acknowledge up front that I’ve never been impressed with the perpetually gloomy, utterly humorless, always lecturing true believer, Sandra Steingraber, who has to be one of the world’s worst hypocrites. The last I know she lived in a gas-heated home in Trumansburg, New York. She saw no conflict in peer-reviewing state fracking studies as a committed fractivist. She has referred to the 226,000 women who worked in the oil and gas industry as “hotel maids and prostitutes.”

Now, she’s gone a step further to describe modern natural gas development (hydraulic fracturing combined with horizontal drilling) as akin to brothels and meth labs, two illegal activities (except in Nevada, of course, with respect to the brothels). I don’t quite understand this obsession Steingraber seems to have in calling everything and everyone in  the oil and gas industry prostitutes. Such gutter level references don’t exactly become an individual who wants to be known for having a PhD, if you ask me. And, why, after the embarrassing fallout from her previous attempt to make the linkage, would she remind everyone of it?

Putting that not so smart decision aside, though, there is also the fact neither of her analogies work. Brothels are illegal in Pennsylvania where the action precipitating the lawsuit is proposed, but fracking is legal. It’s highly regulated, in fact, by Pennsylvania DEP, which just about everyone, and especially DEP, agrees is one of the best in the nation and all the recent studies by Penn State, Yale and the Susquehanna River Basin Commission show no significant or discernible impact on water quality. Yet, the DRBC proposes to ban this legal activity for what is obviously political purposes based on the sort of junk science Sandra Steingraber just loves because it advances her agenda and that of the organizations for who she shills (e.g., the Heinz Endowments).

Meth labs are also illegal everywhere unless the government is running them. So, how does that qualify as an analogy? It doesn’t. But, do you know what is legal in Pennsylvania and currently exists in the Delaware River Basin? Pharmaceutical manufacturing and the use of birth control pills that introduce estrogen into the water supply.These are polluting both the Delaware and Susquehanna Rivers, resulting in male fish with eggs and all sorts of other oddities. You can read all about it in this major USGS study. This chart is especially relevant: 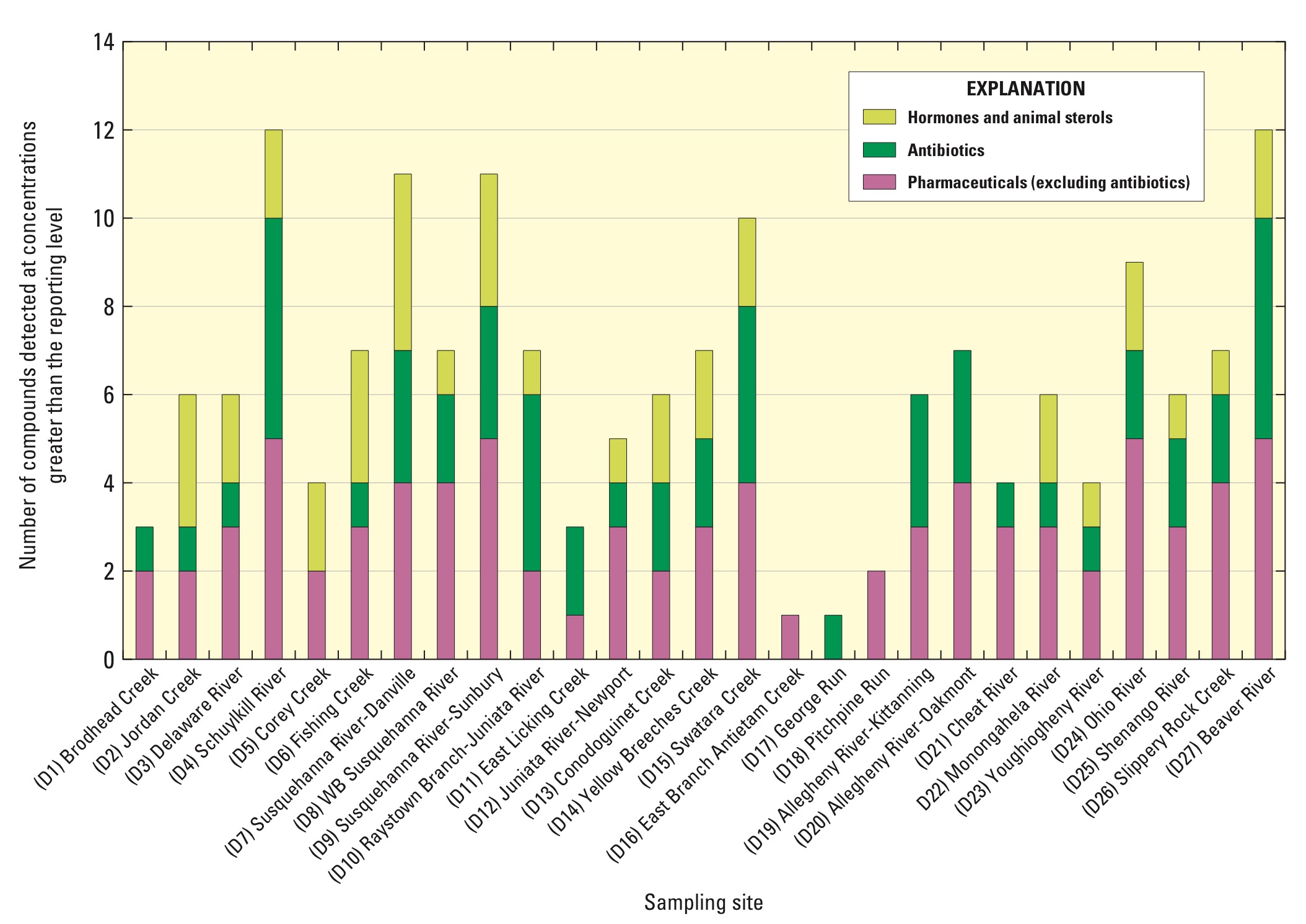 Notice one of the two highest concentrations of hormones, animal steroids, antibiotics and pharmaceuticals is found in the Schuylkill River, which, for those of you from New York, is a major Delaware River tributary. Why isn’t Sandra Steingraber worried about this? It’s not a new issue, after all. A DRBC report from five years ago identified it and included this map showing where are the pharmaceutical plants are all located, every single one of them being in the middle or lower basin and none in the upper. 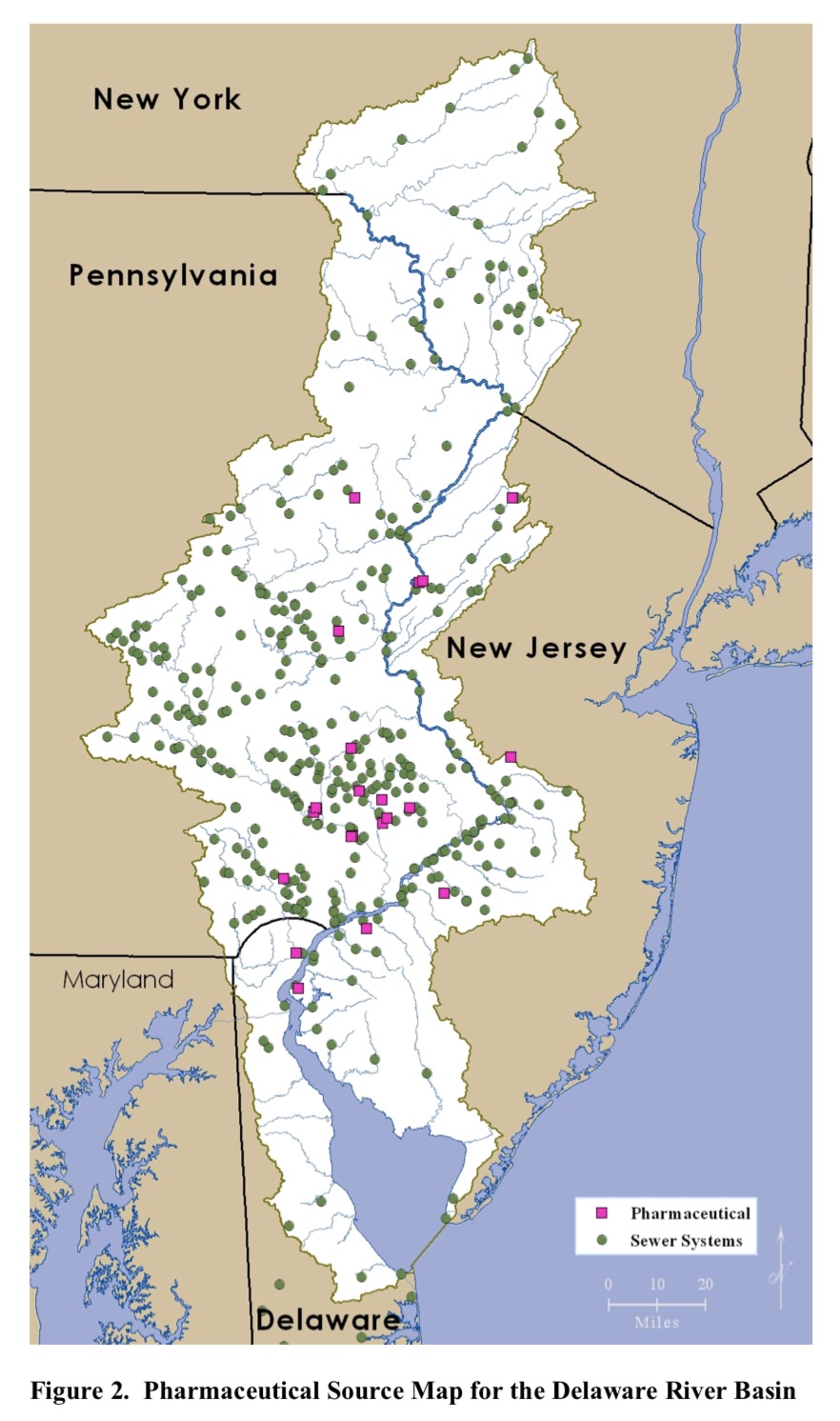 No, neither “Look at Me” Sandra Steingraber, nor the DRBC, are talking much about this in 2018. They’re focused, instead, on a non-existent problem with an otherwise legal use because that’s where the political rewards are to be found and what the fractivist funders want. And, in Sandra’s case, she’s trying to distract everyone with stupid analogies about otherwise illegal activities to avoid talking about the dearth of science (other than the junk variety) supporting her desire to stop an otherwise legal activity. What a stupid trick for a doctor.