[Editor’s Note: Lithium batteries are at the heart of renewable energy storage plans but they are dirty, dangerous and pollute far more than fracking.]

During the Obama-Biden administration, hydraulic fracturing was accused of causing a number of environmental problems—faucets on fire, contamination of drinking water, etc.—but the administration’s own Environmental Protection Agency could not validate those accusations.  Now Biden is planning to transition the transportation sector to electric vehicles that are powered by lithium batteries and require other critical metals where China dominates the market. Mining and processing of lithium, however, turns out to be far more environmentally harmful than what turned out to be the unfounded issues with fracking. 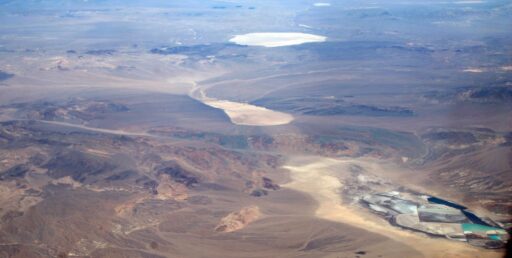 The Chemetall Foote Lithium Operation in Clayton Valley, a dry lake bed in Esmeralda County, Nevada, just east of Silver Peak, a tiny town that has been host to various kinds of mining for about 150 years. The two other dry lakes are south of Tonopah. Photo by Doc Searls.

In May 2016, dead fish were found in the waters of the Liqi River, where a toxic chemical leaked from the Ganzizhou Rongda Lithium mine. Cow and yak carcasses were also found floating downstream, dead from drinking contaminated water. It was the third incident in seven years due to a sharp increase in mining activity, including operations run by China’s BYD, one of the world’ biggest supplier of lithium-ion batteries. After the second incident in 2013, officials closed the mine, but fish started dying again when it reopened in April 2016.

Lithium prices doubled between 2016 and 2018 due to exponentially increasing demand. The lithium ion battery industry is expected to grow from 100 gigawatt hours of annual production in 2017 to almost 800 gigawatt hours in 2027. Part of that phenomenal demand increase dates back to 2015 when the Chinese government announced a huge push towards electric vehicles in its 13th Five Year Plan. The battery of a Tesla Model S, for example, has about 12 kilograms of lithium in it; grid storage needed to help balance renewable energy would need a lot more lithium given the size of the battery required.

The lithium extraction process uses a lot of water—approximately 500,000 gallons per metric ton of lithium. To extract lithium, miners drill a hole in salt flats and pump salty, mineral-rich brine to the surface. After several months the water evaporates, leaving a mixture of manganese, potassium, borax and lithium salts which is then filtered and placed into another evaporation pool. After between 12 and 18 months of this process, the mixture is filtered sufficiently that lithium carbonate can be extracted.

South America’s Lithium Triangle, which covers parts of Argentina, Bolivia and Chile, holds more than half the world’s supply of the metal beneath its salt flats. But it is also one of the driest places on earth. In Chile’s Salar de Atacama, mining activities consumed 65 percent of the region’s water, which is having a large impact on local farmers to the point that some communities have to get water elsewhere.

As in Tibet, there is the potential for toxic chemicals to leak from the evaporation pools into the water supply including hydrochloric acid, which is used in the processing of lithium, and waste products that are filtered out of the brine. In Australia and North America, lithium is mined from rock using chemicals to extract it into a useful form. In Nevada, researchers found impacts on fish as far as 150 miles downstream from a lithium processing operation.

Lithium extraction harms the soil and causes air contamination. In Argentina’s Salar de Hombre Muerto, residents believe that lithium operations contaminated streams used by humans and livestock and for crop irrigation. In Chile, the landscape is marred by mountains of discarded salt and canals filled with contaminated water with an unnatural blue hue. According to Guillermo Gonzalez, a lithium battery expert from the University of Chile, “This isn’t a green solution – it’s not a solution at all.”

China is among the five top countries with the most lithium resources and it has been buying stakes in mining operations in Australia and South America where most of the world’s lithium reserves are found. China’s Tianqi Lithium owns 51 percent of the world’s largest lithium reserve in Australia, giving it a controlling interest. In 2018, the company became the second-largest shareholder in Sociedad Química y Minera—the largest lithium producer in Chile. Another Chinese company, Ganfeng Lithium, has a long-term agreement to underwrite all lithium raw materials produced by Australia’s Mount Marion mine—the world’s second-biggest, high-grade lithium reserve.

In Australia, only two percent of the country’s 3,300 metric tons of lithium-ion waste is recycled. Unwanted MP3 players and laptops often end up in landfills, where metals from the electrodes and ionic fluids from the electrolyte can leak into the environment.

Because lithium cathodes degrade over time, they cannot be placed into new batteries. Researchers are using robotics technology developed for nuclear power plants to find ways to remove and dismantle lithium-ion cells from electric vehicles. There have been a number of fires at recycling plants where lithium-ion batteries have been stored improperly, or disguised as lead-acid batteries and put through a crusher. Not only have these batteries burned at recycling plants, but auto makers are seeing battery-related fires leading to vehicle recalls and safety probes. In October, U.S. safety regulators opened a probe into more than 77,000 electric Chevy Bolts after two owners complained of fires that appeared to have begun under the back seat where the battery is located.

Because manufacturers are secretive about what goes into their batteries, it makes it harder to recycle them properly. Currently, recovered cells are usually shredded, creating a mixture of metal that can then be separated using pyrometallurgical techniques—burning—which wastes a lot of the lithium. Alternative techniques, including biological recycling where bacteria are used to process the materials, and hydrometallurgical techniques which use solutions of chemicals in a similar way to how lithium is extracted from brine are being investigated.

It is estimated that between 2021 and 2030, about 12.85 million tons of EV lithium ion batteries will go offline worldwide, and over 10 million tons of lithium, cobalt, nickel and manganese will be mined for new batteries. China is being pushed to increase battery recycling since repurposed batteries could be used as backup power systems for China’s 5G stations or reused in shared e-bikes, which would save 63 million tons of carbon emissions from new battery manufacturing.

Like lithium, the price of cobalt has quadrupled in the last two years.

Environmentalists expressed unfounded concerns about fracking, but they need to be worried about replacing fossil fuels in the transportation and electric generating sector with electric vehicles and renewable energy where lithium, cobalt and other critical metals are needed to produce these technologies. Mining, processing, and disposing of these metals can contaminate the drinking water, land and environment if done improperly as seen from several examples. And, since China dominates the global market, it just switches what once was U.S. reliance on the Middle East to U.S. reliance on the People’s Republic.