No good deed goes unpunished, of course, but the Lionville Fire Company in Chester County got a nice gift from Energy Transfer and is very happy about it.

Energy Transfer, the company behind the Mariner East pipeline has a wonderful grant program intended to support the communities through which it runs. It’s called the First Responder Fund and it has helped emergency service responders all across Pennsylvania and the rest of the country. One of those recipients is the Lionville Fire Company in Chester County, which just got $32,354 for the purchase of new turnout gear and four gas detectors. Who wouldn’t support that? Well, anti-pipeline activists who do little or nothing for the Lionville Fire Company; that’s who. Anyone surprised? 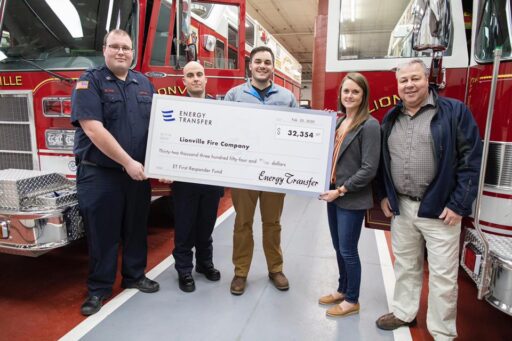 This is one of the pictures posted on the Lionville Fire Company’s Facebook page at 8:14 AM Friday celebrating the grant thanking “Energy Transfer for their support in helping us keep our community safe.” This courtesy of recognizing Energy Transfer’s contribution didn’t go unpunished, though. Almost immediately there were snide comments from, among others:

There were others, too, but you get the idea; it was all about shouting “how dare you disagree with us or take money from a company we’ve told you we don’t like.” This rebuttal says it all, though;

This is an all volunteer fire company. These are our neighbors who give countless hours every day of the week in order to ensure you and your family is safe.
Do you even donate money?
Have you ever even spoken to any of their members, they are some of the most dedicated and selfless people. These men and women get up at all hours of the night, during holidays, and some have paid the ultimate sacrifice to keep you safe. And not a single person is paid to do so.
You’re all simply uneducated about the pipeline and it clearly shows. The fact that there’s been one in the same easement since the 1930s well before you all moved here, and nothing has happened. It’s 2020 if pipelines didn’t exist this product would be transported by rail and truck which statistically has a far higher chance of accident. Stop living your lives in fear and get on with yourselves. How many of you have gas appliances in your house? Where do you think that magically appears from?
This grant money only helps these volunteers continue their superior level of training. To keep the community safe.
Thank you to the men and women of Lionville Fire Company for all your hard work.

Yes, it’s hard enough to keep volunteer fire companies up and running without catcalls from those who haven’t even paid to get in on the act. First responders are critical community servants of the first order and Energy Transfer has been supporting them where it can. Consider, for example, this:

The Upper Chichester Township Police Department yesterday accepted a grant in the amount of $28,816.05 from Energy Transfer through its First Responder Fund, which funded the purchase of an unmanned aircraft system (UAS). 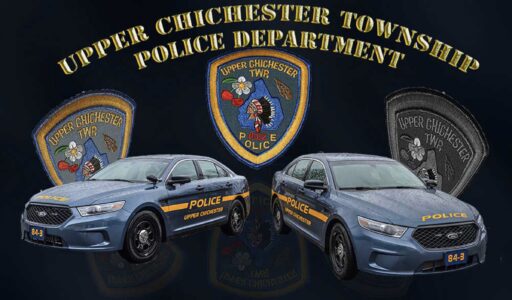 “This grant has allowed us to upgrade our UAS program and strengthen our safety and security capabilities,” said Upper Chichester Township Police Chief Thomas Bush. “The new drone has already proven to be a huge asset to our force and has enhanced our ability to protect our community…

“The new equipment purchased through this grant has already better-equipped our men and women as they protect and serve the Center Township community,” said Center Township Fire Chief Bill Brucker. “We were glad to replace worn-out equipment including thermal imaging cameras, protective hoods, hoses, nozzles and racks – all of which will make our crew safer as they focus on response and rescue.”

The Center Township Volunteer Fire Department is based in three stations and provides both fire and rescue services and emergency medical services.

And, finally, this from the Reliance Hook and Ladder Co. #1:

We’d like to thank Energy Transfer Solutions for their generous grant. These funds will help the company purchase gear, hose, gas meters and thermal cameras. This equipment is necessary to help provide the highest level of fire protection to our community. 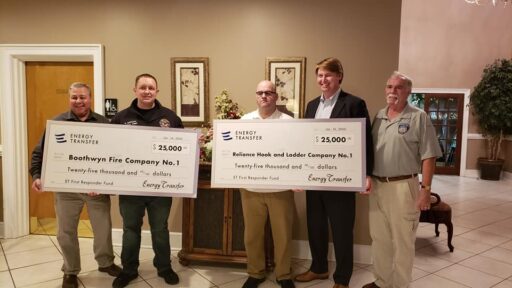 Notice, too, there’s yet another fire company in the picture; and they’re all very happy and appreciative. They’re models of positive thinking, in fact. They’re precisely the sort of volunteers who uphold the spirit of public service. Those critics of the Lionville folks? Not so much.

2 thoughts on “Lionville Fire Co. Volunteers Get Much Appreciated Help As Activists Whine”