Guy S. Williams, a long time member and Recording Secretary of Pipeliners Local Union 798, tells the story of his life and times as a pipeline welder.

My life began on a hot July day in 1950, when I was born to the union of Billy Ray and Jean Williams. We lived in a small shotgun house on my Grandfather’s farm. It was a cotton and cattle farm, a place I thought was a little piece of heaven and, consequently, loved.

My days consisted of going to school at a small country school, then coming home and going to the field to work until dark. I didn’t know we were poor because everyone had about the same thing. We, meaning my two brothers and my Mom, were always busy.

We had a lot of cows, several hundred head, so consequently we were always either grinding feed or feeding cows. We would grind at night and feed in the morning and I would help my Mom milk two cows before school. This is to what I attribute my own strong work ethic.

I never knew what my Dad did for work. I only knew he was gone a lot. As I got a little older, I discovered he worked construction. Sometime later, I found out my Dad worked on the pipeline. Each summer my Mom, brothers and I would go see Dad for a few days (big vacation).

As I got a little older Dad would let me go to work with him. Little did I know what was in store for me. One thing I distinctly remember was that all the guys wore starched and ironed clothes, had a little jiggle in their pocket and drove nice cars.

One day while out on the job, this stately looking gentleman wearing a pair of sunglasses and a big cowboy hat drove down the ROW. I asked my dad what he did. My dad replied that he was the big boss. I told my dad, that’s the job I want.

The next thing I knew the boss stopped and asked me if these guys were treating me alright to which I responded “not all that good.” That man’s name was Roland Cain, General Superintendent. Mr. Cain told me to get in the truck with him and said he would treat me a little better than they had been doing. Little did I know this would be the beginning of a lifelong friendship.

When I was about thirteen or fourteen, I started bugging my dad about going to work to make some money. Well, in June of 1965, I went to work for Grayco Marine at Cameron, Louisiana, swamping on a low-boy,  a truck and trailer used to haul equipment.

The low-boy driver’s name was Dirk and he was the tallest man I had ever seen (6’ 7”). I remember he was a hoot. I made about $2,000 that summer working 7 days a week, 12 to 14 hours per day. That was the most money I had ever seen. I worked for this contractor for the next couple of summers. Some of the jobs weren’t too glamorous. but I finally got to help a welder.

Sometime later, I was able to buy a union book out of Pipeliner’s Union 798 which sparked a fire in me that still burns today 53 years later. When I got my first check, it looked as big as the moon. I thought about all the things I could do with this money.

That day in June of 1968 I became a full-fledged pipeliner and started on a journey that continues today. A journey that has taken me to 49 states, four countries and thousands of miles.

In 53 years of working in the pipeline industry, my wife and I were able to get a little piece of the pie. I married my college sweetheart in 1973. My wife was a second grade school teacher who had never been away from home. Shortly after getting married, my wife told she just could not stay by herself, so I got busy hunting for a job and, shortly after the hunt began, it was over. I went to work for a guy building metal buildings. I worked there until the Trans Alaska Pipeline started and we made the decision for me to go to Alaska. I spent 5 years in Alaska, and this is where we finally got a foot hold. 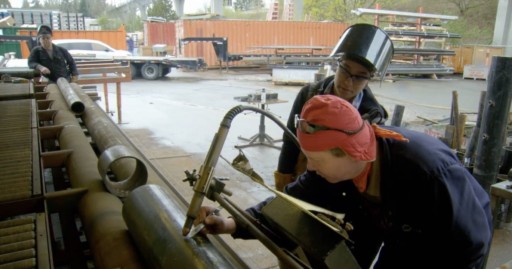 We were able to raise, educate and help two sons get a start in life. One son is the V.P. of Operations for the Sam Moon Real Estate Development Group and the other son works for Price Gregory and is a 24 year member of L.U. 798. He, like me, is an officer.

The one thing I instilled in my sons was to give a day’s work for a day’s pay and be on time.  They have grown into fine young men. My wife of 45 plus years is now retired and travels with me; she finally realized I need constant supervision.

Without discounting the contributions my wife made to our family, our main source of income came from the pipeline trade. Pipelining has afforded my family and me the opportunity to basically  go anywhere and do most anything we want to do. In short we have led a pretty charmed life thanks to the industry.

10 thoughts on “The Life and Times of Guy S. Williams, Pipeline Welder”