I first became aware of leisure class environmentalists many years ago, not long after I won an “Environmentalist of the Year” award from a local Audubon Society chapter. I started noticing many of the folks advancing supposed environmental causes were, more often than not, wealthier than the average bear, and more interested in stopping things anything near them that might interfere with their leisure activities than truly protecting the environment. It was all about fighting this or that to the death for purely selfish  reasons and never about improving a project.

It was all a bit of a revelation to me at the time, but in December, 1977, Harper’s Magazine, carried an article, titled “Environmentalism and the Leisure Class” (sub-title: “Protecting Birds, Fishes and, Above All, Social Privilege”). This piece is a must read for anyone wanting to understand leisure class environmentalists. More recently, though, one of our readers has provided another great example. It’s a fractivist group I wrote about just a couple of days ago – Otsego 2000. It was against wind energy before it was for it as an alternative to natural gas, but is it really for it? No. 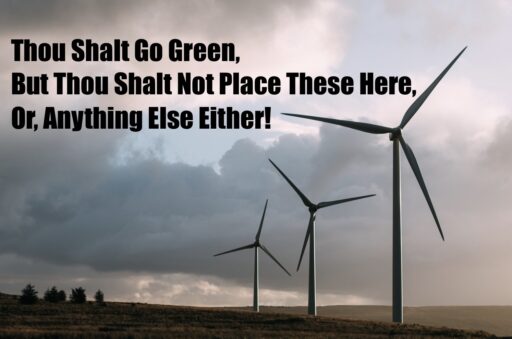 Our reader apparently did an internet search on Otsego 2000 and found a link to a 2002 story headlined “Windmills On Their Minds; Battle Lines Drawn Over a Source of Power That Some Say Obstructs a Gorgeous View.” Here are some revealing parts of the story (emphasis added):

A small but vocal band of preservationists is tilting at windmills here in this town of 1,270.

High-tech, 400-foot-tall wind towers, to be precise. The kind with 100-foot-high blades that cost $1 million apiece. With the encouragement of New York State, an entrepreneur wants to put as many as 27 windmills on a 1,900-foot-high ridge that is visible for miles.

Environmentalists might be expected to celebrate the scheme. If constructed, the Cherry Valley turbines could produce pollution-free, wind-generated electricity that, its proponents say, would help relieve power shortages and foster energy independence from Arab oil…

But the windmills are hardly welcome everywhere in Cherry Valley. ”This is green power on the surface, but when you scratch it, it’s black underneath,” said Roberta O’Neill Kieler, a Cherry Valley resident.

The newest manifestation of Nimby, or not in my backyard, requires a different acronym: not in my viewshed. Wind-farm opponents contend that, like a watershed, a viewshed, or public view, is the common property of those who share it, and must not be degraded unilaterally by any one property owner.

The Cherry Valley windmills would be visible for miles in several local communities, and near Cooperstown from the Hyde Bay section of Otsego Lake, the model for the Glimmerglass of the James Fenimore Cooper novels.

Henry Cooper, a great-great-grandson of the writer, is president of Otsego 2000, a planning and historic preservation organization in Cooperstown next door…

In the Cherry Valley area, environmentalists have had to do much soul-searching in opposing the towers. ”I am absolutely committed to wind power,” said Paula DiPerna, a board member of Otsego 2000. But Ms. DiPerna, who worked for the environmentalist Jacques-Yves Cousteau for 18 years, paraphrased her onetime boss when she said, ”Do we want to live in a world where everything is spoiled just a little bit?”

…Though wind power would not bring the town many jobs, several people would be paid to maintain the towers, Mr. Bachmeyer said. Regionally, the economic situation is grim and census statistics place Otsego County among the 10 poorest in New York. ”I get calls from farmers who want to know if they can site wind turbines on their land,” Mr. Peterson said. ”That income could mean survival.”

…Some preservationists, including Ms. DiPerna, the board member of Otsego 2000, are disturbed that ”the beautiful idea of green energy all comes down to paying the lowest price to the least stringent community to make a profit for private developers.”

…Opponents say the windmills make too much noise, can fling ice in winter and are dangerous to migrating birds. Supporters say these complaints are exaggerated.

But though the opponents also reject the towers’ required nighttime airplane warning strobes and red lights, the primary objection is the daytime visual impact of the 27 windmills.

”The 19th-century landscape we value would become an industrialized landscape,” Ms. DiPerna said.

…Meanwhile, the resident-vs.-outsider debate in Cherry Valley has been intensifying. ”Most of the people who live in our town year-round aren’t against it,” Mr. Loucks said, adding that a lot of the tower opponents live in New York City.

So typical of the New York City leisure class William Tucker wrote about in 1977. It didn’t change much in the intervening 25 years and it’s little different today another 17 years later. Otsego 2000 was formed by Henry Cooper, now deceased, who was very much a member of the New York City leisure class despite his connection to Cooperstown. A Buckley School guy and a member of the Century Association, he was all about gentry class aesthetics and he didn’t want industrial wind farms anywhere near his retirement/vacation home in Cooperstown. He created Otsego 2000 to stop them simply because he didn’t want to see them and the language employed to do so was very much like that later used to oppose natural gas.

Notice the commitment of Otsego 2000 folks to green and wind energy until it’s anywhere near them. This is the same dynamic we’ve seen repeated over and over again when it comes to leisure class environmentalists; they’re all for green energy in someone else’s backyard, which isn’t a serious position. Rather, it’s one they’re able to get away with due to their wealth; wealth that allows them to masquerade as enviros when they’re nothing more than the crudest of NIMBYs.

And, nothing’s changed. Read the Otsego 2000 statement on solar energy and renewables. It’s a weasel worded statement to the effect “We support it if we can’t see it.” Here are some choice tidbits:

We strongly support solar energy development compatible with our agricultural resources and environment, including community solar facilities for local benefit. We encourage commercial, residential, and agricultural property owners to shift to rooftop or freestanding solar arrays to reduce or eliminate fossil fuel use…

To that end, we support development of solar installations that:

We also support residential, commercial and community development of geothermal, wind and other renewable energy sources, guided by similar considerations.

What does that mean? It means Otsego 2000’s leisure class environmentalists have the same position on all renewables today that they had on wind energy in 2002; they’re for it in your backyard and against it in their backyards.