A Lake Erie wind project demonstrates the sheer futility of so much of green political correctness as time and money are wasted on a really dumb project.

Our friends at Master Resource posted an interesting article the other day about a project with a weird name I’d never heard before; the LEEDCo/Icebreaker Offshore Wind Project. As I read the piece by Sherri Lange and then checked out the Lake Erie wind project website itself, I was astounded at the futility not only of the project but of green political correctness as a whole, which I’ve now concluded is a communicable disease. 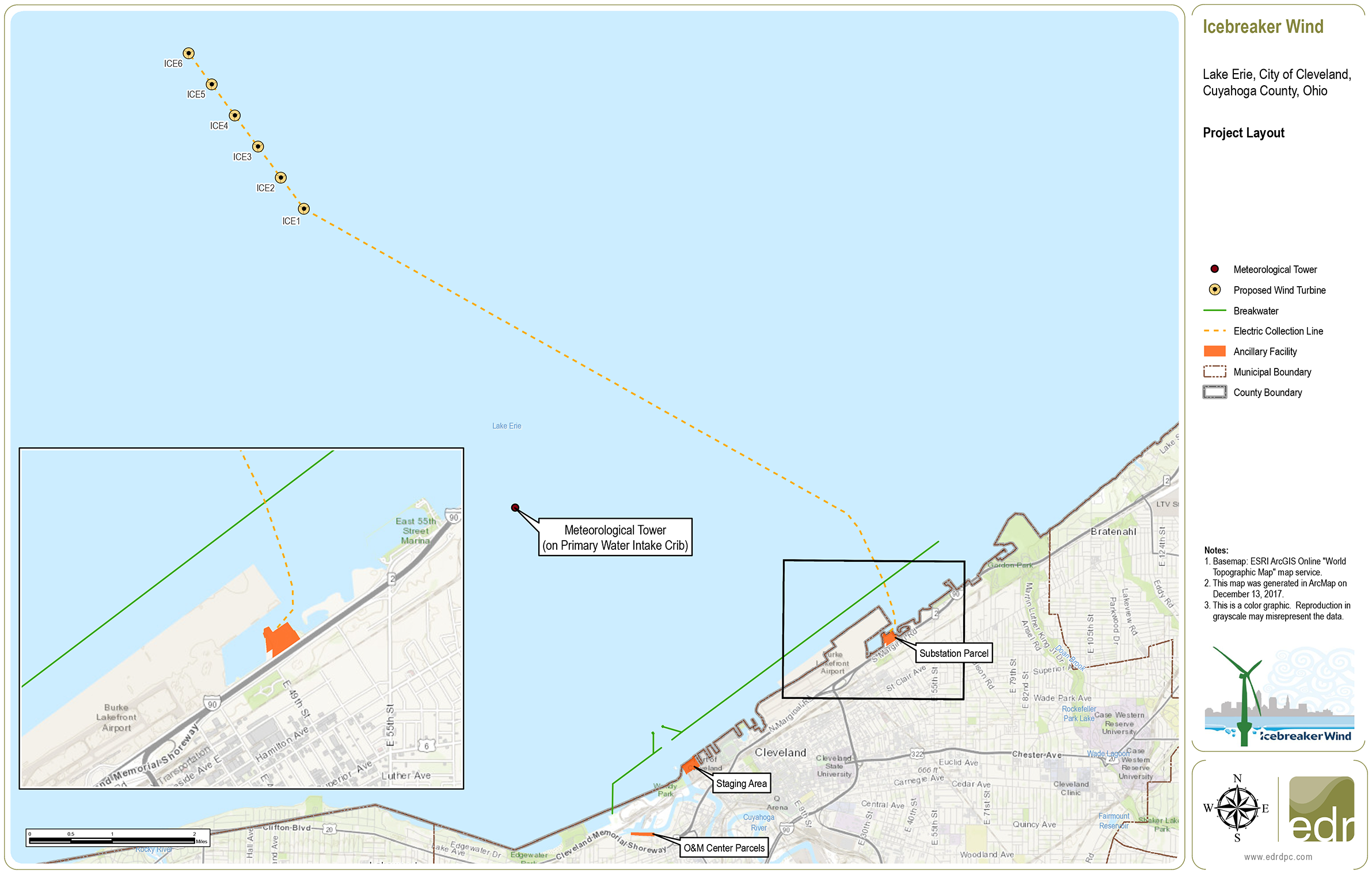 How does that work, anyway? Well, as the old saying goes, “If you can get enough money to go through your hands, some of it will stick,” I guess. Over $12 million of mostly government money went through the hands of LEEDCo for the Lake Erie wind project between just 2013 and 2017, so some of it did stick to someone’s hands, it seems.

In August 2009, the Lake Erie Energy Development Corporation (LEEDCo) was created by the Great Lakes Energy Development Task Force (GLEDTF), and developed and launched by NorTech Energy Enterprise, the Cleveland Foundation, the City of Cleveland, and Cuyahoga and Lorain Counties (Ohio).  LEEDCo was founded as a private, nonprofit regional corporation to initially erect wind turbines in Lake Erie, and eventually to help stimulate an entire offshore freshwater wind industry in the Great Lakes.

LEEDCo is a regional economic development public-private partnership that has brought together important project stakeholders from the City of Cleveland, the Port Authority, and coastal counties.

NorTech is now TeamNEO, a regional economic development organization. It was involved at the outset and, early on, apparently paid for an economic study that resulted in this ludicrous analysis:

As this demonstrates, the entire thing was launched with massive self-deception on the order of the France’s Maginot Line. TeamNEO doesn’t seem to mention it anymore on their website, and, probably, for good reason. It not only missed its 2013 schedule for the first handful of windmills to be operating but is still pursuing permits six years and $10 million or so later.

Meanwhile, things have changed. A year and half ago, the public was told this:

Today, however, the tide could be turning again. Eight miles north of Cleveland in Lake Erie, the Icebreaker Wind project is poised to become the first offshore wind project in the Great Lakes. The project, lured by LEEDCo, is owned by Icebreaker Wind Power through the Norway-based investor Fred. Olsen Renewables. Pending federal and state approval, developers anticipate construction will begin in 2020 on the six-turbine, 20.7 MW project.

Yes, LEEDCo apparently decided it was going nowhere without a partner. Therefore, it brought in Fred Olsen Renewables from Norway, resulting in the name “Icebreaker Wind Power” now being attached to the Lake Erie wind project.  But, no profits are expected according to the V-P of Operations:

The Ohio Power Siting Board has given the preliminary go-ahead to six wind turbines planned for Lake Erie, about eight miles northwest of Cleveland. The project would be the first freshwater wind farm on the Great Lakes and the first in the nation. But even if plans become reality, the $126 million project is unlikely to ever turn a profit.

“The vision is a thriving industry that provides clean power,” said Dave Karpinski, vice-president of operations for Lake Erie Energy Development Company (LEEDCo.) The Icebreaker project is intended to test the waters, so to speak, in Great Lakes wind power. The high start-up costs mean the site cannot produce enough electricity to pay for itself. But the point, according to Karpinski, is to get turbines up and running. “To get there, you’ve got to demonstrate that it can be done and permitting is a big thing, that’s part of the demonstration.”

Huh? What a joke. And, the 20.7 MW is undoubtedly the nameplate peak capacity, not the actual generation, which means the 10-12 years and the $125-150 million to get it it done will deliver a lousy 5 MW or so of electricity and often at the wrong time, which means it generates costs and inefficiencies, with surplus electricity as a problem and no reduction in the amount of natural gas power needed. That makes it an especially cruel joke on ratepayers and taxpayers.

But it doesn’t end there, as Sherri Lange’s Master Resource post makes clear:

The rebranded project faces innumerable objections. The opposition is a who’s-who of local parties, many environmental.

Protection of the wildlife, birds, bats, butterflies, dragon flies, fish and all aquatic interests, appears the lifeblood of the protesting groups…

An ongoing embarrassment for the developer is the abject failure of the freshwater lake installation in Sweden, Vanern. This first ever freshwater installation was hailed by Lorry Wagner as a model of how harmless and benign freshwater turbines are. This comparison can now be seen as possibly “debilitating.”

In 2010, LEEDCo invited the Swedes to present their plan for ten turbines in a shallow lake of ten feet to rocks, Lake Vanern, to an audience at private Cleveland based University Case Western. This project, used as a positive reference point, first world turbines in fresh water, has proven embarrassing.

The project is in a condition of “crisis,” financial stress, near bankruptcy and, after much wrangling, approaching a hopeful sale. The distress sale can only occur if various technical problems are resolved: gear boxes, cabling and loss of power. “The insurance company Trygg Hansa has to pay SEK 10 million (US dollars 1,053,750.00, One Million, fifty-three thousand, seven hundred fifty dollars) to the municipal company Vindkraft Vänern as compensation for damage to the wind farm’s wind turbines:“Developers knowingly withheld “data” on the failures:  “We chose not to go out with the data when we are doing a sale so as not to spread more negatively about the wind farm than necessary,” says Mats Enmark.”If Vanern is any bellwether for turbines in Lake Erie, Icebreaker, take heed…

What is emerging is a pattern of cronyism…

Public pressure to end this ten-year story of corporate profit taking is mounting. Groups around the Cleveland area such as Save Our Beautiful Lake, and groups on the east end of the Lake watching proposals for that area, groups from PA and even further, are vigilant. Most are calling for an EIS (Environmental Impact Statement/Study), which scrutiny will certainly focus on the environmental hazards; and some are vigorously calling for, after a ten plus year battle with LEEDCo, a Great Lakes Moratorium. It appears that the public is increasingly aware that it is not about six turbines; but a massive proliferation, with international participants, a “Saudi Arabia” of wind, and the emphatic response is “not here in this lake, nor any Great Lake.”

Icebreaker’s disingenuous assertions, promises of job chains (Ontario lost 300,000 manufacturing jobs in 8 years, mostly due to the higher cost of subsidized power, wind and solar), false promises of cleaner air, and zero application of even basic common sense environmental practices, presents us with a gathering storm. The assertions are unfathomable in the face of facts from not only North America, but Europe.

That about sums it up, doesn’t it? The Lake Erie wind project is grand theft corporatist rent seeking from ratepayers and taxpayers for a project that will never make any money, will produce something never needed, is opposed by enviros and the marine industry and whose sole accomplishment seems to have been producing a combined $500,000 in annual compensation for its two top officers. This isn’t just crazy; it’s a disease that, unfortunately, seems to be highly communicable in a country where feelings trump facts and staying trendy is the thing to do until it isn’t.