Lackawanna College played host to regional high school students looking to a natural gas industry “brimming with opportunity” for their own future.

As new and returning students arrived at the Lackawanna College School of Petroleum and Natural Gas (School of PNG) in New Milford last week, administrators were getting a better idea of how their ongoing efforts are filling the classrooms, satisfying the needs of employers, and meeting the expectations of the students. 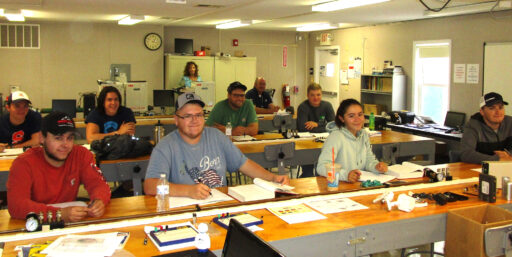 Second year students, including Matt Glatzel (front, second from left) and Summer Wilkes (third from left) have not only completed their internships, they are well on their way to earning family-sustaining wages in the natural gas fields upon graduation from the Lackawanna College School of Natural Gas & Petroleum next spring. Here, they participate in a Production Communications Systems class taught by Gary Leber (not pictured). Photo by Rick Hiduk.

Though instruction technically began on Aug. 27, Lackawanna College hosted an open house event at the School on Aug. 28 that also gave several young adults an opportunity for “express enrollment” – fast-tracking those just learning about the program into the classroom by Friday.

There was some added hoopla with radio station Froggy 101 broadcasting live from the parking lot, but program director Sue Gumble attributed the underlying good vibes to the general enthusiasm that the students brought to school with them, “especially the second-year students,” she related. “They are coming back from their internships and being able to share their experiences. They were so proud of their accomplishments.”

The two-year program, which maintains a balance between book work, hands-on lab time, and field trips to gas-related facilities, includes a summer internship between the first and second year. “Internships help you get your feet in the door,” said Summer Wilkes, a graduate of the Tunkhannock High School Class of 2018 whose family followed the natural gas business here from New Mexico. Summer got an internship as an operations technician at Williams Companies, where both her parents are employed as master electricians.

“It has given me a new perspective, in-depth knowledge and a new awareness of the field my parents have worked in,” Summer said of the work she did over the past three months. She was impressed by the size of the compressor units and the amount of gas that can be moved through a 6- or 8-inch pipe.

Matt Glatzel of New Milford got an internship in a similar position with Cabot Oil & Gas Corporation, which fostered his interest in the “upstream” and “midstream” ends of the business, where natural gas is procured and processed before it is sent down the line. Matt always did his best in shop classes at Blue Ridge High School, from which he graduated last year. He was allowed to attend the School of PNG as a high school senior, simultaneously chalking up his first year of college. Gas processing units (GPUs) fascinate him, and he’d like to be working with them as a full-time employee after graduation.

Summer is pursuing a degree as a measurement technician and can already see herself working in that arena. Only after she was interviewed for this story did she learn that Williams had asked her to stay on as a part time employee while she finishes school. According to Gumble, the companies that keep the interns, which include Cabot and Repsol Energy Company, work very closely with the school to ensure that the students have adequate time to complete their degrees.

“They want the students to do well,” Gumble said of the collaboration with the gas companies. “Their education is very important to the industry.”

Lackawanna College also maintains a flexibility that makes it possible for students like Emma Hivner of Nicholson and Eian Williams of Clarks Summit to pursue degrees. Both are academically somewhere between their first and second years but feel confident the school will work with them to get them into the job market as soon as possible.

“It may take them an extra semester or two,” center coordinator Marianne Orlandini explained, “but we can get them graduated in two and a half years.”

Emma, who transferred to the School of PNG from Keystone College, comes from a blue collar family of contractors and engineers and sees the natural gas industry to be brimming with opportunity.

“Part of the appeal was to work outside,” she related. From an early age, Emma couldn’t wait to climb onto big equipment and make things happen.

Eian was able to take four of the classes he needed at LC’s main campus in Scranton, but he came to New Milford this year because of the flexibility. “The bigger schools can’t really do anything about your schedule,” Eian noted. “That’s the good thing about being here.”

Emma and Eian gave high marks to their instructors and to the school for keeping the size of lab groups small. “All of the classes are very hands-on,” said Emma. “The size of the classes allow the teachers to really get to know your strengths and weaknesses and work on them with you.”

So far, she most enjoys the electronics and tech classes and wants to work in the gas fields. When her interview cycle comes up in March, she hopes to be accepted at a local company but, like the other students interviewed, she is not opposed to going elsewhere for the right offer.

Eian would like to explore other avenues, calling the PNG school degree “a ticket to anywhere in the United States – anywhere that there’s oil or gas under the ground.”
“It’s a degree that’s portable,” Orlandini agrees. “Technicians are not the ones who are digging the pipelines. They are operating compressor stations and managing well pads.”

Outside in the parking lot, Froggy morning personality Doc Medek was equally impressed by the school and the opportunities that it provides for students. “The average starting salary is $55,000 and up. They get paid internships and an average of three job offers upon graduation,” he remarked. “You can’t beat that.”

While the curriculum at the school is constantly evolving to keep up with technical advances in the gas industry, the other change that Gumble sees this year is “a real eagerness in the students to get into the industry. I think that’s large part due to the alumni who talk to them and help them see that the opportunities are endless,” she stated.