The outrageous anti-speech actions of some state attorneys general, including Eric Schneiderman, the NRDC shill, stem from a 2012 “La Jolla Junta” meeting.

I don’t believe I’ve seen a more un-American, anti-free speech document than a subpoena issued by Claude Walker, Attorney General for the US Virgin Islands and one of several AG offices attacking Exxon-Mobil for supposedly hiding evidence of global warming. Readers will recall this is part of a coordinated effort by several AG offices, announced at a press conference featuring NRDC shill Attorney General Eric Schneiderman. It grew out of a meeting at the Rockefeller Family Fund, and an earlier 2012 meeting of what we have referred to as the La Jolla Junta that we reported on several months ago.

Ironically, the Walker subpoena and the scheme of which it is part and parcel almost certainly qualifies as a criminal conspiracy. But, far worse than this, it marks a dangerous venturing into freedom-killing authoritarianism where one’s very thoughts are subject to investigation and persecution by public officials who happen to disagree politically. This is no way to change minds and influence people. If the NRDC gang really gave a damn about climate change it wouldn’t be pursuing such tactics and would be acknowledging the role of natural gas in achieving meaningful reductions in carbon emissions, even as our energy needs have grown.

I encourage everyone to read the subpoena. It’s not lengthy, it’s easy to digest and it’s chilling to the bone if you didn’t realize just how far these zealots are willing to go to impose their views and intimidate others. Intimidation, of course, is what it’s about and it isn’t Exxon Mobil that’s threatened as much as everyone who might have ever come into contact with the company to share views. The subpoena demands copies of literally any communications and I mean any (emphasis added):

“Communications” mean any exchange of information by any means of transmissions, sending or receipt of information of any kind by or through any means including but not limited to: verbal expression; gesture; writings; documents; language (machine, foreign, or otherwise) of any kind; computer electronics; email; SMS, MMS, or other “text messages; messages on “social networking” platforms (including but not limited to Facebook, Google+, MySpace, and Twitter); shared applications from cell phones, “smartphones,” netbooks, and laptops; sound, radio, or video signals; telecommunication; telephone; teletype; facsimile; telegram; microfilm; or by any other means.”

Gee, does that mean the raised eyebrows an Exxon Mobil employee gave when this happened in front of her actually has to be submitted to the Attorney General for review? 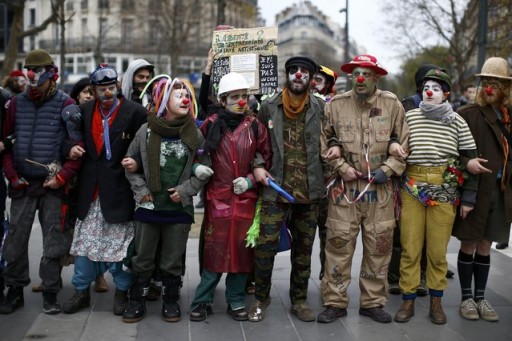 Apparently so, as gestures count. One wonders how to record it; perhaps something along the lines of “April 22, 2012: Our gasoline service station attendant in Toronto observed this climate change protest on the street in front of the station and registered a gesture of bewilderment.”

The definition of climate change communications is equally inclusive:

Have you ever read anything so ludicrous or over-the-top? Merely talking (or gesturing) about the weather or the climate is enough to trigger a reporting requirement. Don’t wipe the sweat off your brow on a hot day if you work for Exxon Mobil.

The absolute worst, though, is the list of those with whom communications (or gestures) are suspect and must be reported. Consider this small sample:

Where, in God’s name, does any Attorney General get the authority to investigate climate discussions with the Acton Institute for the Study of Religious Liberty? Tell me this is anything but pure harassment intended to intimate these organizations from being involved in the issue. It’s sickening abuse of authority – Stalinist in character. It’s racketeering and it ought to be prosecuted or the free speech of every American is impeded.

It’s also stupid. The NRDC gang that’s at the heart of the La Jolla Junta knows the real progress on climate change, if that’s what’s keeping them awake at nights, is to be had from use of natural gas. Trying to solve the problem, such as it is, with solar and wind alone (even with hydro and nuclear thrown in for good measure) is a hopeless cause as these two charts demonstrate: 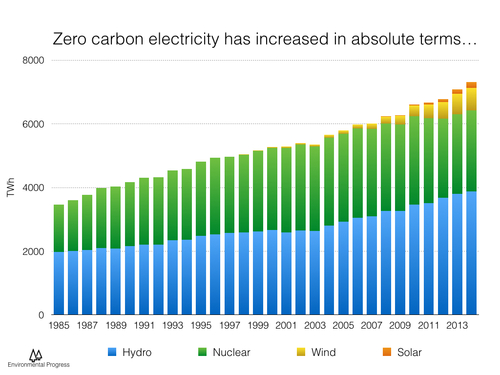 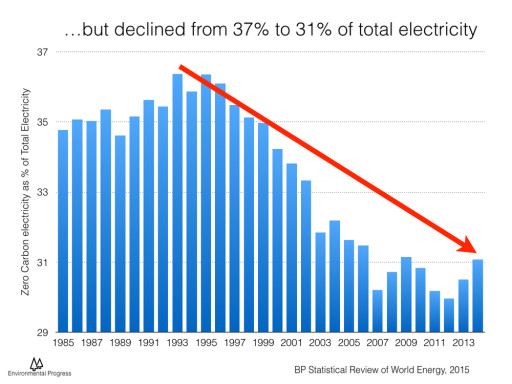 These charts, moreover, are from a source promoting nuclear and agnostic at best about gas. The facts speak for themselves though; if we are to have more electricity, and we must if Third World companies are to lifted out of poverty, natural gas has to be part of the solution. No, it’s not zero emissions, but it’s the next best thing, has resulted in huge CO2 emission reductions (don’t read this if you work for Exxon Mobil or you’ll have to report it) and it doesn’t require the massive unaffordable subsidies required of solar and wind. That’s the simple reality the La Jolla Junta deliberately ignores in its criminal crusade to shut down the oil and gas industry; along with all our speech, unless, of course, it agrees with their mind control template.