Josh Fox was in Oneonta, NY last night with his “Solutions Grassroots Tour.” The event was protested by 50+ landowners not buying his “Lieapalooza.”

Josh Fox has put together a traveling road show called the “Solutions Grassroots Tour” to promote opposition to natural gas development in the form of support for renewable energy, as if the two things were mutually exclusive. The production, according to Fox is “an interactive music, theater, and film event that motivates towns to adopt renewable energy solutions for individual, community, and commercial settings, as well as campaign for pro-renewable energy legislation…the storyline revolves around a town that is facing the possibility of becoming an extraction zone for extreme fossil fuel development.”

The event took place at SUNY Oneonta (natural gas served). Fox claimed it was about “doing something that is positive for our towns and our neighbors” but the 50+ of us landowners who were there with us to protest the event saw things quite differently. Here are our observations.

Some 50+ of us gassers greeted the Josh Fox’s “Lieapalozza” last night. Attendance inside couldn’t have been more than 150, probably far less, unless they came through the back door without us seeing them. That’s sparse for what was advertised as a seven-piece band, a theatrical production of twenty, an “expert” panel, and salesmen for solar in attendance. We arrived at 6 pm; left at 7:05. We made our point. 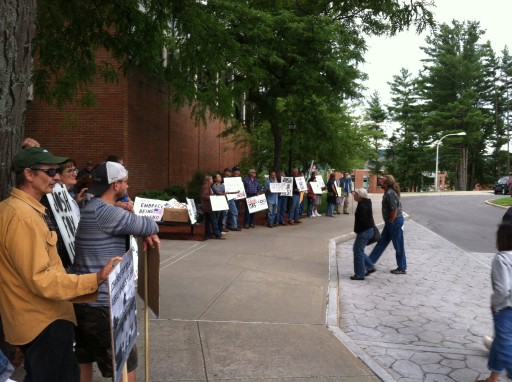 Many in attendance at the “Lieapalozza” were the regulars. We see them at every event. There’s even an odd camaraderie between them and some of us. We know their names; we give them nick names: we know their histories. They, I’m sure, do the same for some of us. We had about a dozen in the same category, mostly our downstate brethren. The rest were Unatego Area Landowners Association members or friends from the area. It’s heartening to know that we still have the fight in us. 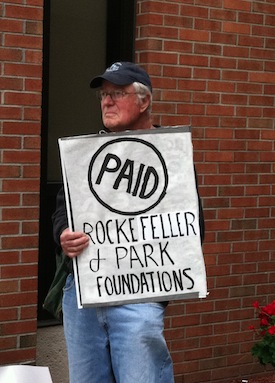 Josh Fox’s presentation is part of a well planned attack on natural gas by the Park Foundation of Ithaca, in league with other foundations who are pushing renewables. Their plan is diabolically clever and flawlessly executed.

A few years ago, in fact, gas was seen as a bridge fuel to a future of renewables by the enviros and their funding foundations. When hydraulic fracturing, combined with directional drilling, made shale productive, it drove production to record highs and moderated prices. Renewables couldn’t compete in the market. Enviros saw a threat to their renewable dream and did a 180 degree turn.

They determined gas must be destroyed.

They put together a campaign to thrash gas, using activist scientists, sympathetic journalists, and a network of environmentalist groups. Papers put out by biased scientists were picked up by enviro journalists and quoted by environmental activists at town board meetings and elsewhere. Likewise, these tainted scientific “reports” filtered upward to semi respectable outlets like the Huffington Post and then were picked up by the New York Times. 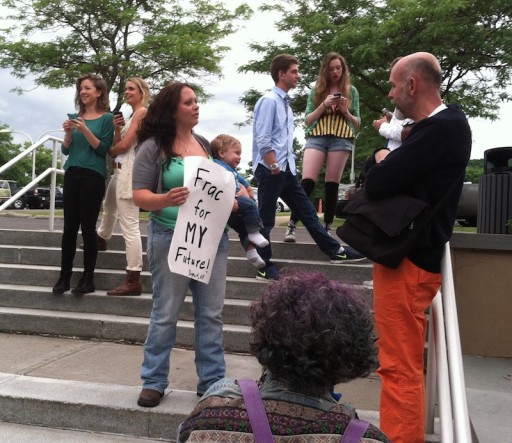 This tactic has been spectacularly successful. Every decision in court against us has the enviro narrative as subtext, Public opinion, especially downstate, has likewise been influenced. The weird, outlier viewpoint of the extreme environmentalist is now mainstream.

You can read all about it in a Philanthropy Roundtable article titled “Turning Up the Heat on Fracking” by Jon Entine. This is a MUST read.

Josh Fox’s “Lieapalozza” is funded by the Park and their Rockefeller gang allies. Connect the dots. That’s what we’re up against.

Those who are against gas do not tell the truth. They never employ risk/benefit analysis. They are not interested in compromise. They must be confronted in order for us to win this battle.

In signing off, thanks to Werner Moennich for alerting us to the “Lieapalozza,” Vic Furman for telling me, “We’ve got to be there,” and Ken Thomsen for his signs and dedication.

We did good tonight, even though there was no press. Keep the faith and remember November. 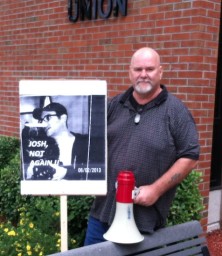 There were more than 50 of us landowners, mostly from the Oneonta area, standing outside the SUNY Oneonta Hunt Union Center last night. There was no need for anyone to ask them why we were there; the signs they carried said it all. “Josh Fox is a Liar” read many, “It’s All about Grant Money” read another.

Some of the signs were well thought out as one had a picture of Josh Fox demanding he tell the truth, but the nose in the picture just grew bigger and bigger, as in the fairy tale Pinocchio. When the famous puppet lied, his nose grew too.

Someone who looked a little like Josh Fox (one of his allies) showed up just before 6:00 pm, He was met with a chorus of “Liar, Liar, Faucet on Fire.” He was also asked if they’d be serving Fox’s “Kool-Aid” tonight and he responded to the effect “at least I use clean water.” That confused me…It silenced me when he said that! I was perplexed Did he really say “I use clean water” to make his Kool-Aid? My mind went into overdrive, as here was an associate of the man who has over and over again claimed fracking poisons water. So, where did he get the clean water, since New York has been fracking gas wells since the 1940’s, including throughout the Finger Lakes wine country? 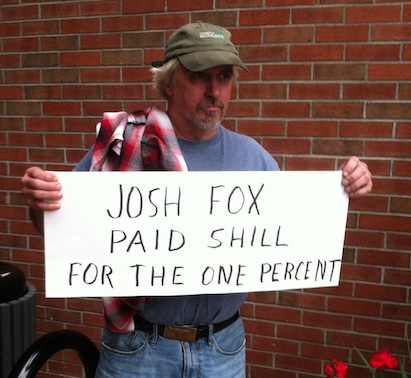 Fracking has taken place all over the Keystone State as well, yet this man, an ally of Josh Fox, stated he uses clean water to make his Kool-Aid, and I want to know where the heck he got it because Fox claims fracking has polluted water wherever gas drilling is done!

Wait a minute…. could it be…. could Josh have just lied again? Like he did about the flaming faucet in Colorado and his non-existent $100,000 offer? 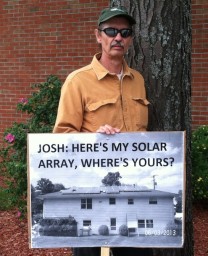 Frack Chernaga shows picture of his solar array and asks “Where is Josh Fox’s?”

Those who showed up to support Josh Fox and help him prove to his funders that he was spending their money wisely, must have felt like they were walking a gauntlet and finally got a taste of their own medicine. It was obvious most could give it, but not take it. They were not accustomed to anyone protesting them or their guru, as if it was the first time they experienced live opposition to the Fox and Pony Show.

One disgruntled lady who I could only assume was retired by the look of her unkempt grey hair and painted on eyebrows, looked at our signs, took a deep breath and belted out “You want to debate me? I have a PhD in Physiology.” It reminded me of some ne’er-do-well bragging about the fact he drove a Cadillac. I told her I had a Phd in honesty. She huffed and puffed and walked away.

The parking lot contained more than a few such cars, so I asked if they wanted their bicycle chains lubed, or would they prefer I clean the solar panels on the roofs of their SUV’s? They knew I was being sarcastic but even still, they had no reply because you can’t defend hypocrisy; you can only lie to support it. 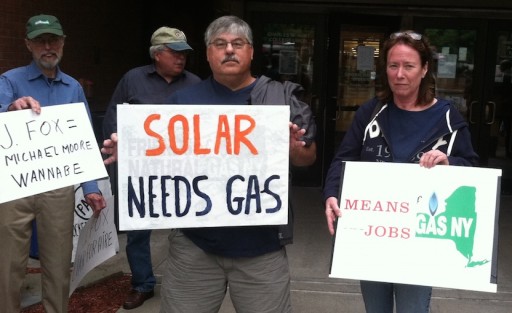 So it went up until 7:05 when we all thanked each other and departed. Was it worth it… was it worth going into the Fox’s den and watch him crawl in and have to explain us to his followers? By all means it was! One last thing, on my way out I noticed a small 4-door car plastered with no-frack, no-spill bumper stickers… They were everywhere, all over the back windows, the side windows, the side panels of the car and across the back end…. But I noticed something that made me laugh…. There were no stickers on the gas cap, though, as that might have prevented easy access to fill up with unleaded…