Josh Fox loves to rail against corporations. If several quotation websites can be believed, he said “I think we’re in an era of unprecedented dominance by corporations. I think people understand that deeply; I don’t think that’s even questioned.” Nonetheless, his angst regarding corporations appears to be a fleeting thing because he uses one routinely in his day to day work of trashing America and the gas industry. He has, in addition, at least two limited liability companies (LLCs). His corporation, Sweet Jane Productions, Inc., is also a corporate welfare queen.

Josh Fox created Sweet Jane Productions, Inc. in late 1996. It has always done business as International Wow Company, but that’s just a fictitious name. The real entity is Sweet Jane Productions, Inc. and it’s organized as a domestic not-for profit corporation. It was granted 501(c)(3) tax-exempt status in 1997 and according to this latest 990 return exists to “foster international collaboration/exchange in theatre and presentation in media products for awareness and cultural purposes.”


That may be it’s public purpose, but it’s private purpose appears to have been to collect as much corporate welfare as Josh Fox could garnish to operate his very strange theatre company, which produced stuff like this before Gasland. He’s been very successful in feeding at the public trough.

To support International WOW’s “The Recovery Project,” an interactive and participatory drama about home construction and the building boom. Over the course of the performance run, audiences will be trained in carpentry, construction, and green technology to modify an existing structure in an effort to investigate what constitutes a home and how inappropriate development has contributed to foreclosures, unfinished buildings, and limited viable community spaces.
Fiscal Year: 2011   Grant Amount: $15,000

To support the development and production of “A Place to Live,” a new play by artistic director Josh Fox. The International WOW Company play will be loosely based on the themes and ideas in Anton’s Chekhov’s “The Cherry Orchard.”
Fiscal Year: 2010   Grant Amount: $20,000

To support a production of “Auto Da Fe,” a new work created by International WOW in collaboration with playwright Matsuda Masakata. The play is a reinterpretation of the Odysseus myth and was originally produced in Kyoto, Japan to great popular and critical acclaim.
Fiscal Year: 2009  Grant Amount: $20,000

To support the production of “You Belong to Me,” a chamber piece conceived and directed by Josh Fox. The piece will be co-created by an international ensemble of artists from Argentina, Palestine, Japan, and the United States.
Fiscal Year: 2007   Grant Amount: $12,000

To support a consortium project with Soho Think Tank to produce the world premiere of “Will We Not Return.” Conceived and directed by Josh Fox, the piece will be created collaboratively by an international ensemble and will feature the company’s founding members from Thailand.
Fiscal Year: 2006  Grant Amount: $10,000

He’s also secured grants from the Japan-US Friendship Commission, which is “an independent federal agency founded in 1975 as an initiative stemming from the reversion of Okinawa to Japanese sovereignty and with a mission of promoting mutual understanding and cultural exchange in the US-Japan relationship through grant programs for institutions.” He got $30,000 from this agency in 2009 for “Production by the International Wow Company to be created during Japan residency and performances by the Marebito Company of Masataka Matsuda.” He apparently got additional money (or used some of the original grant) in 2010 for a “two-city tour of AUTO DA FE, adapted from Masataka Matsuda’s play.”

It’s Not Only the NEA

Fox has used state money as well, including $70,825 from the New York State Council on the Arts in recent years to fund such things as the Death of Nations:

The New York artists of the International WOW Company are continuing to spearhead the creation of a new work entitled Death of Nations. The project will involve emerging and established artists from WOW’s New York and Thai companies as well as artists in Japan and Argentina. Artistic Director Josh Fox, Associate Artistic Director Aya Ogawa, and the ensemble have and will continue to travel to each of these countries for intensive rehearsals and work-in-progress performances with local artists, these workshops will create the four “chapters” of Death of Nations. In Argentina WOW Core member Dario Tangelson will serve as liaison and lead artist, for the Japanese chapter we have an established relationship with Japanese ensemble M-Laboratory under the direction of Hiroyuki Miura and also with the Setagaya Public Theater in Tokyo. The International WOW Company calls both Thailand and New York home, our Core members on each continent serve as the ensemble under Josh Fox and Aya Ogawa.

Like so much of what Josh Fox has produced in the way of theatre, the message of Death of Nations is anything but clear. Here, for example, is the script of Leviathan, which Fox says was originally performed as part of Death of Nations. Here’s a taste of the dialogue:

“We ate dinner in that room and we could actually taste our food, living as we were on the edge of the fear, on the edge of doom. True love is forever living on the edge of doom. I don’t expect you to understand these things. I don’t expect me to understand these things. But I have not been home in what feels like centuries. I have not been home in what feels like millennia. Where has it left us now, my love? The restfulness of home has left my bones for good. And there is a good gaping grinding left in the joints. Harrowing down to one day crunch themselves into the crumbly grumbling ground. When I was a kid I used to sneak fistfuls of raw hamburger meat out of the freezer and suck on them til they turned grey. The taste of the raw flesh all ground up, o my god! I can’t breathe anyway. Am I being buried alive? You see? Thanks! I did what you told me to do! I DID WHAT YOU RECOMMENDED! What you continue to prescribe even though the lights are dimming and dim further until this slow dotting away of the world, just stop breathing. I am incarcerated in this mind this mind that is not even mine.”

This is part of a very long speech Fox says “should be delivered directly to the audience with no pauses, very rapidly and passionately” by “a white man dressed as a politician.” Yes, this is what Fox does with the unique form of corporate welfare he gets from the New York State Council on the Arts. Are you happy yet, New Yorkers, with how your tax money is being spent?

Well, there’s more. Josh Fox has also taken money from the Brooklyn Arts Council, which in turn takes money from the National Endowment for the Arts and the New York State Council on the Arts, to upgrade his rehearsal space. 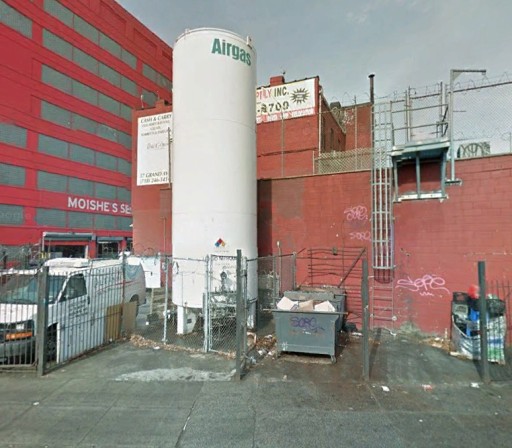 Then, there are all those fat cat tax-exempt foundations from whom Fox grabs money. He took at least $275,000 from the Park Foundation to finance “the production and dissemination of film work and media projects that frame gas drilling issues and report on the crisis” and the like, including “Gasland Part 3.” The Rockefeller Foundation also gave him $50,000 in 2010 for this:

Something called the Multi-Arts-Production (MAP) Fund, created by the Rockefeller Foundation in 1989 and primarily funded today by the Doris Duke Charitable Foundation and the Andrew W. Mellon Foundation, is yet another financier of Josh Fox endeavors. It gave him $25,000 in 2006 for History of God:

The piece explores two questions: Is a sustaining love possible between people; and is a sustaining peace possible between nations? By juxtaposing these issues, A History of God aims to address the role of “projection” in contemporary culture – in the drive to war, in which nations project images of otherness onto a dehumanized enemy; in the formation of identity, in which the literal projection of media images informs our definition of self; and in the process of falling in love, in which we create a fantasy of the beloved from our desires and needs. This inquiry has led to a final obsession: Is it possible to see the person before you as real?

A History of God grafts the war-zones of Iraq and Afghanistan onto our American present. The space created is simultaneously an interrogation room, an office and a brothel in which Americans can pay to enact their fantasies on a Third World other. Love is war, war is business, and identities can be exchanged as commerce. Gender is a continuum; characters switch back and forth as easily as changing their clothes.

The Map Fund gave him another $40,000 for Reconstruction, described as follows:

During Reconstruction, the audience will assist in the greening, or transforming, of a raw space into a renewable energy performance space that will serve as an artistic hub, a community center, and a model for utilizing renewable energy and technology to reclaim public spaces. In collaboration with noted urban-planning expert and MacArthur “Genius Grant” award recipient, Majora Carter, we will be transforming the former Spofford Detention Center in the Bronx, which is now an abandoned, unused Juvenile facility.

In the winter of 2013, WOW will begin the process of transforming the space through the use of renewable energy technology, such as solar panels, wind turbines, geothermal energy, and others.WOW is also partnering with Eastern Energy Systems, Long Island’s leading renewable energy company, to create the building’s energy systems. Architect Joe Levine, an expert in retrofitting and restoration, will lead the effort.

In part one of the play, the audience will start out incarcerated in the many still-standing jail cells at Spofford. In part two, they will be processed and trained in green retrofitting as they emerge from the prison system into a sustainable society. In part three, using teleprompters, selected audience members will serve as characters performing with members of the ensemble in the unfolding drama, telling the stories of those who were real, former inmates at Spofford.

Sounds like great fun, doesn’t it? We could go on, as there are still other examples, but what is clear is that Josh Fox is a huckster preying upon governmental agencies and wealthy tax-exempt foundations to do his art, such as it is. His latest 990 return indicates Sweet Jane Productions, Inc. took in $515,875 in gifts, grants, contributions and membership fees in the last five years and only $528,712 in gross receipts from admissions, sale of merchandise and the like. We also know Sweet Jane Productions, Inc. set up wholly owned LLCs for both Gasland and Gasland II, with separate budgets and, probably, separate funding sources.

The whole enterprise provides a convenient method of grabbing money from the government and tax-exempt entities, making Sweet Jane Productions, Inc. a corporate welfare queen. The non-profit status of the corporation gives it the ability to operate free of the constraints of the entertainment market and deliver products tailored to the wants of Josh Fox himself and, in the gas of Gasland, the special interests he represents. It’s Corporate Welfare 101, in fact.