Josh Fox and friends assume they own the land and are at war to claim it from upstate landowners they view as nothing more than annoying squatters. Their aims are all too clear from recent quotes and lawsuits against farm interests.

The war on property rights started five years ago for many of us when the radical environmental  organizations listed below came after our mineral rights with respect to natural gas. I distinctly remember discussions at that time with others who were experienced in dealing with such groups.  They said the attacks on our land would not stop at denying us the rights to harvest our natural gas but expand.  They were all too correct, I’m sorry to say.

The last six months have produced a lot of crowing from fractivists such as Bill Huston, the Catskill Mountainkeeper and Josh about their supposed “huge victories.”  Here is what Josh Fox had to say in two Facebook posts on July 16 (bold emphasis added:

I can’t believe it and I can’t stop crying. The companies that leased 80,000 acres in my township, in the upper Delaware River Basin are LEAVING. CANCELLING ALL THE LEASES. WE ARE FREE. THANK YOU ALL FRACTIVISTS. THANK YOU EVERYONE FOR THIS AMAZING VICTORY. WE WIN! AND WE WON’T STOP UNTIL WE WIN EVERYWHERE. I’m speechless. This proves that people, organized and passionate can actually win sometimes. In the grand scheme of things, this is a small victory, but it’s HUGE. It’s the Upper Delaware river.

And really, if you can, please visit the Upper Delaware. Swim in the river, walk in the woods. Stand on the bridges and look for Bald Eagles. Lie out at night and take in the stars. Listen to all that water flowing down to bring water to 16 million people downriver. Watch as the fireflies come out in the early summer evenings. It belongs to all people, not to any landowner or gas driller. It’s yours, come visit. You won’t regret it.

The Josh Fox touchdown dance is more than a little premature, like that early declaration of victory in Iraq.  He seems not to realize the land can be re-leased the moment the Delaware River basin Commission and New York finally enact their regulations governing natural gas drilling. 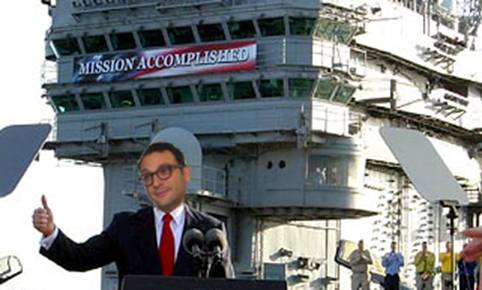 But. that misses the bigger point – Josh Fox wants the land itself and, indeed, thinks he already owns it.  He resents landowners who pay the taxes on the land, he resents their very presence and he assumes it’s just there his and other visitors’ enjoyment and nothing else.

Now, these same radicals want to kill off farm expansions. They want to drive any real farming out of New York so they can have the land to themselves free from the annoying presence of local hicks like me and my neighbors.  If you think I am making this up read this press release in the Binghamton Press today (emphasis added):

The groups, including the Sierra Club, Riverkeeper and Citizens Campaign for the Environment, say the state violated the federal Clean Water Act when it moved earlier this year to increase the number of cows that farms can maintain without having to comply with a more-restrictive set of waste-management regulations.

The lawsuit also claims the Department of Environmental Conservation didn’t follow procedure as it made the change and actually needed legislative approval, something it did not obtain.

Gov. Andrew Cuomo’s administration first announced its intent to change the dairy farm rules last year, when it held a “Yogurt Summit” near the Capitol in part to brainstorm ways to increase milk production for the state’s burgeoning Greek yogurt industry. The plan was immediately panned by environmentalists, who said the increased waste from the expected increase in cows would cause additional runoff and degrade water supplies.

“We’re talking about all across the state, there are facilities that are going to be deregulated,” said Kate Hudson, Riverkeeper’s watershed program director. “It will ultimately impact streams and lakes that people recreate in and that people depend on for clean water, for drinking water, for irrigation. It impacts farmers and non-farmers equally.”

The regulation change, which took effect earlier this year, changed the limit in New York for what qualifies as a medium Concentrated Animal Feeding Operation, or CAFO. Previously, if a farm had 200 or more cows, it had to obtain a CAFO permit and follow more-stringent rules for managing manure, which has high levels of nitrogen, phosphorus and other materials that can be harmful to water.

Now, farms can have up to 300 cows before qualifying as a CAFO.

The New York Farm Bureau and dairy farms across the state hailed the change, saying it eliminated a barrier for producing more in-state milk.

Peter Constantakes, a spokesman for the DEC, said the agency had not yet reviewed the lawsuit, which was filed late Friday in state Supreme Court in Albany County.

Some of the environmental organizations, including Citizens Campaign for the Environment and the Sierra Club Atlantic Chapter, are being represented by Earthjustice, a non-profit law organization. The White Plains-based Pace Environmental Litigation Clinic is representing the remaining groups, including several members of the Waterkeeper Alliance and Theodore Gordon Flyfishers.

Notice the names of the groups – the same people who oppose natural gas drilling and they, too, freely admit they want the land for recreation.  The are suing because the Governor merely wants to raise the size of the farms affected by the onerous CAFO regulations by 100 cows (from 200 to 300) so New York farmers have at least a fighting chance of competing with 10,000 cow herds in California, Nebraska and elsewhere.  Missing from the news story is the fact New York’s definition was stricter than the Federal requirement and Cuomo’s action only reverses an over-the-top attempt at state regulation.  But, none of that matters to these groups, who have no interest in compromise or reason and are determined not to surrender any territory won.  They are at war with us, after all.

All the talk about encouraging agriculture as an alternative to natural gas drilling turns out to be just so much more of the crap (pardon the pun) CAFO is intended to regulate.  These groups couldn’t care less about farmers or landowners – they are focused like a laser beam on protecting their own narrow special recreation interests.

Josh Fox’s Facebook posts and this lawsuit lays bare who these people are and what they are about – themselves.  They are interested in anything but driving out locals and condemning upstate to a future of continually decline to the point no one else will want it and they can have it for their own personal enjoyment.