Jennifer Huntington has left us. She was the plaintiff, and victim, the forgotten woman, in the Middlefield, New York home rule case, who we’ll not forget.

Jennifer Huntington was a remarkable individual. She was a dairy farmer, and a very innovative one. She owned the Cooperstown Holstein farm in the Town of Middlefield in Otsego County, New York. She also wanted to drill a vertical natural gas well—no high volume hydraulic fracturing—to supply the needs of her farm and a neighboring facility.

Sadly for Jennifer, though, Middlefield borders Lake Otsego, known as Glimmerglass in the Leatherstocking Tales, and includes the eastern part of Cooperstown. It’s a gentry class island of mostly inherited prosperity for the trendy in Upstate New York. So, naturally, NIMBYism and virtue signaling were more important than Jennifer’s farm, and they told her she couldn’t do it. She fought back in the decent sort of way you might expect of a farmers raised on old-fashioned values and lost. Now, she’s passed away and the world has lost a class act if there ever was one. 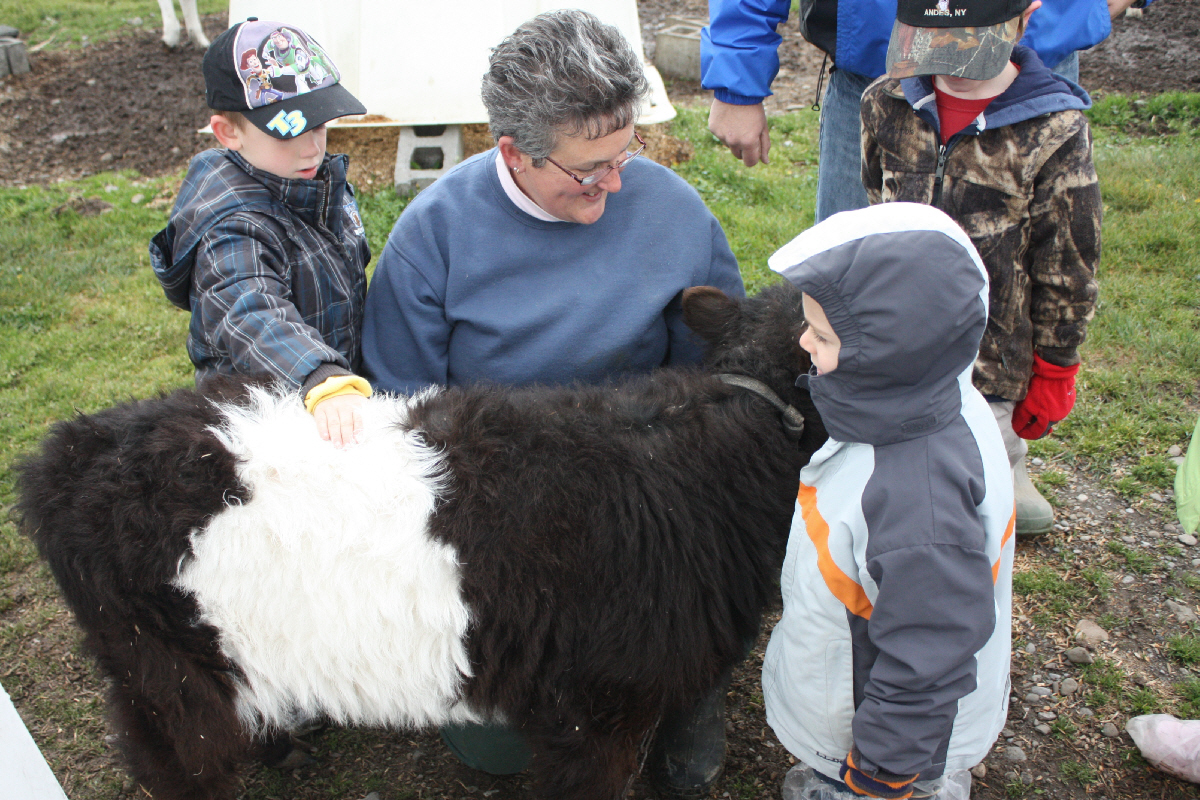 Jennifer Huntington giving two youngsters a farm experience in 2012. It was “Down on the Farm” Day.

I remember Jennifer well because she was at numerous meetings intended to advance the cause of natural gas development in Upstate New York. She wasn’t boisterous, though, as was the custom of her opponents. She was simply there to demonstrate her support and answer questions posed to her. She sought no publicity, made no rash statements  and was in no one’s face. She was respectful to a fault and not even inclined to overstatement. She was the kind of person most of us raised on farms knew growing up; a decent reserved individual of quiet dignity.

Those qualities come through in this Facebook tribute from the Otsego County Dairy Promotion/Princess Team:

It is with great sadness that we share the passing of Jennifer Huntington. Jennifer has been an integral part of the Dairy Promotion Committee for many years. She sponsored 2013-14 Dairy Princess, Rachel Stone, 2014-15 Dairy Princess Sandra Mravlja and was mom to 2014-15 Alternate Dairy Princess Molly Watson.

Jennifer started and hosted Sundae on the Farm at her farm Cooperstown Holstein since 2014. Not only was Jennifer an integral part of Dairy Promotion but also the Agricultural and 4H community. Her life was full of helping youth learn about Agriculture and about bringing awareness to the public about farming.

Jennifer was a great asset to the agricultural community and to Otsego County. She will be dearly missed. Our condolences go out to her family and we hope that good memories of her will help ease your pain.

Good memories, indeed. Jennifer Huntington was the plaintiff in one of the two Home Rule cases in Upstate New York (Middlefield and Dryden), decided for the move-ins who had taken over both towns and against the landowners who had these towns what they were. She hadn’t sought to fight in court but knew it was necessary to preserve not her only rights but those of others across Upstate. She and they unfortunately lost to an EarthJustice legal team financed by the Park Foundation trust-funders (who heat their new Ithaca office building with gas) as a Court of Appeals composed of Cuomo appointments and an ally of now disgraced Assembly Speaker Sheldon Silver ruled against her.

The trendies and trust-funders, selfish hypocrites all, cheered. Jennifer Huntington, characteristically, said nothing. She did no screaming or foot-stomping about how her rights had been stolen. She didn’t even point out the absurdity of Middlefield’s law, which went so far as to restrict even new natural gas distribution lines. She was too classy to do any of that. Her gentry class neighbors, her town and the courts all abandoned her. They treated her like the “forgotten man” Amity Shlaes wrote about. She was content to be the forgotten woman, but none of us who knew or worked with her will ever forget her. RIP

Update: Check out these videos about the struggle Jennifer and Upstate New York friends faced then and still face now — especially this:

4 thoughts on “Jennifer Huntington: The Forgotten Woman We Can’t Forget”