The Commerce Clause of the U.S. Constitution should be used to fight back against trust-funders trying to monopolize energy development in this country.

I’m about two-thirds of the way through Richard Brookhiser’s wonderful biography, “John Marshall: The Man Who Made The Supreme Court.” Brookhiser is an outstanding biographer and is a New York native, having homes in City and in the Catskills. It’s difficult to write a book about legal cases and make it readable but he accomplishes the task quite easily. One of the cases he relates is Gibbons v. Ogden, which is all about New York, and It occurred to me as I read about the decision, that it offers the strategy we should be using to fight back against the trust-funders financing fractivism. 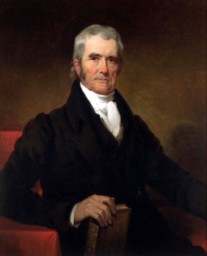 Fractivism is all about banning fracking and opposing pipelines, nowhere more evident than in New York State, which has done both at the direction of Governor Corruptocrat and the instigation of the NRDC gang. Fractivism is, in fact, everywhere financed by trust-funders of the Rockefeller type who constitute the NRDC gang.

What is it these trust-funders desire beyond assuaging their self-imposed guilt at having done so undeservedly well in life? Well, in the Rockefeller case, it’s land they want to make a wilderness playground and to buffer their second-homes from the masses. In the Nathaniel Simons case, it is hedge-fund investment opportunities in green energy scams. Both want to monopolize energy development with renewables; one as a weapon against natural gas development standing in the way of their land acquisition agenda and the other as a corporatist opportunity to milk the taxpayers.

New York’s fracking ban (“at this time”) and the DRBC’s proposed ban as well as the former’s pipeline obstruction are intended to clear a path for those renewables and to ensure they have a future energy monopoly. They have relied upon air and water quality objections to sustain their arguments but those are mere facades. The facts are now overwhelmingly clear that natural gas development has cleaned the air, lowered carbon emissions and protected water quality. There is, moreover, ever more progress on these fronts and fracking has stimulated rural economies while delivering huge cost savings and better air in places such as New York City. It’s simply undeniable.

This is important because, without the evidence they’re dealing with an environmental or health issue, the state and/or the DRBC have no right to interfere with the commerce of the nation. And, they’re doing big-time interference when, for example, New York denies permits to the Constitution Pipeline necessary to deliver Pennsylvania natural gas to New England where it’s desperately needed. They’re also doing interference when they prevent Delaware River Basin landowners from developing natural resources needed in New York City.

Nothing could, in fact, better define interstate commerce than the mesh of pipelines across the country intended to deliver natural gas wherever it’s needed. This argument was made very effectively here, in fact, over five years ago by Attorney Ken Kamlet. That was before two New York cases made it through the appeals process and, unfortunately, no one picked up on it to sue in Federal court. More on that momentarily but, first, there’s the Gibbons v. Ogden decision to be considered.

The case, so well explained in detail by Brookhiser, involved a monopoly granted by the State of New York to run steamboats on the Hudson River. Ogden was the beneficiary of that monopoly, New York being every bit as corrupt then as it is now. Gibbons challenged the monopoly by running his own steamboats in defiance of the state law, which was intended to prevent competition to Ogden. New York State courts said there was no conflict with the U.S. Constitution because there were no Federal steamboat regs and the operation took place entirely within the State of New York.

The case was subsequently appealed to the U.S. Supreme Court and Chief Justice John Marshall issued the unanimous opinion in favor of Gibbons based on the Commerce Clause, which is as follows:

The Congress shall have power…

To regulate Commerce with foreign Nations, and among the several States, and with the Indian Tribes

Marshall’s opinion focused on the word “among” stating it means intermingled with:

A thing which is among others, is intermingled with them.

This interpretation led him to then conclude the Federal government had a right to regulate and thereby also to ensure commerce among the states without the interference of state regulations he described as both “repugnant and hostile” and “extreme belligerent legislation.”

The intermingling reference is particularly relevant to shale gas resources and natural gas pipelines, both of which involve intermingling of resources and product as they are developed and delivered far and wide across state boundaries. Ken Kamlet makes this case in detail with respect to moratoriums then proposed at the local level in New York. And, everything he says applies even more so to the current pipeline obstruction by the State of New York.

Ken’s arguments and the Gibbons v. Ogden lesson also apply to the DRBC’s proposed fracking ban, which would deprive Delaware River Basin landowners of the opportunity to participate in the commerce that is the shale revolution. It would impose a ban on certain water uses. It clearly has the authority to regulate water use within reason but when it attempts to extend that authority into outright banning of a legitimate use—commerce—by controlling the activity itself (i.e., the wellpad) rather than just the water use, it is obviously violating the Commerce Clause. Moreover, no agency or state should have the authority to stop a pipeline at a border any more than they could stop a railroad, a plane or a truck from passing through.

If the industry is serious about stopping all the fractivist harassment financed by gentry class trust-funders and hedge fund opportunists, it will start taking the State of New York, the DRBC and other such agencies to Federal court for Commerce Clause violations. It’s time to take the offense and this the weapon to use in my humble opinion. But, I hasten to add I’m not a lawyer; I just play one on this blog from time to time. Perhaps some of our readers from the legal profession will join in with their opinions. You know you are, so please do.