Fractivist smug is one of those creeping underlying problems in energy debates. It relies upon blocking out arithmetic and may be more dangerous than smog.

Is smug is as dangerous as smog in the climate debate?

All too often we see press stories about energy or climate that exaggerate the utility of various cool and sexy sounding technologies. The inference left unsaid is carbon fuels, efficiency and energy in general are no longer a big issue, so, as we saw in the UK in the past, let’s call the whole fracking thing off. Who needs fossil fuels? Leave them in the ground. It’s so easy that any effort at all isn’t needed. We can just go ahead and energy falls from the sky.

Almost every day we see journalists, desperate in pursuit of novelty, always looking out for a new angle on energy. Past the breathless headlines, and the first couple of paragraphs painting a wonderful tomorrow, almost anyone with a basic knowledge of energy, or indeed the laws of physics, finds something else again. Sadly, almost anyone includes almost none of the  journalists who print the stories. Here are three examples out of hundreds, beginning with this video:

From the BBC, Heating Houses with Nerd Power.

All computers produce heat, but computer servers produce a lot of heat – so much that it usually costs a fortune to cool them down. So why isn’t this heat used instead to keep homes or offices warm? Actually, “nerd power” is already being tried out.

Ask Jerry van Waardhuizen about his new radiator and you get an excited response. “I’m very enthusiastic,” he says. “It’s a beautiful thing.” The sleek white box, which has been hugging his wall for two weeks, looks nice enough as radiators go. But what’s really got Waardhuizen excited is what’s going on inside.

Instead of hot water, it contains a computer connected to the internet, doing big sums and kicking out heat in the process. It was created by a Dutch start-up called Nerdalize, and could be part of a solution to a big problem for the tech industry.

Note the catchy name and the nerdy hook. Editors love these stories.

One shouldn’t need a super computer to figure how pointless, apart from clickbait, this story is. As anyone outside the UK knows, the BBC gets massive on-line ad revenue. More clicks translates to more cash for BBC Worldwide, who sends a lot home so in the UK we can pretend we don’t have commercials. Back to futuristic story, but reality is setting in after the original hook.

The radiators take a little longer than average to heat up – about an hour, Waardhuizen says – and a single unit won’t be enough to heat a room in mid-winter. But, after a small set-up fee, the heat is completely free to users. Nerdalize gets its money for providing data services – its current clients include Leiden University Medical Centre, which uses the radiators to crunch through lengthy protein and gene analysis.

Output: 1000W – about half the peak output of a conventional double radiator, but eRadiators can be left on all day

Eight radiators for €3/4 thousand without the heat actually being sufficient to heat your house in mid winter. You’d have to replace a natural gas system with even more electric heat. I’m not saying it’s wrong. But, it’s fairly pointless. The point to hipster/nerds, of course, is not that it solves any climate problem, but that you are seen to be acting on the climate. The problem isn’t smog. You might say it’s fractivist smug. And, it gets the clicks as even the BBC writer can see:

Nerdalize have what any start-up needs, after a good idea and financial backing – a nice story. 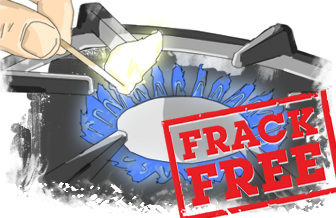 The ultimate self serving story comes from the UK’s Ecotricity in a press release printed verbatim…sorry…a fine piece of award winning journalism from world famous UK media outlet, The Guardian:

A plant that turns grass into gas could be Britain’s answer to fracking, according to its operators.

The anaerobic digestion system will be one of the first such plants to feed gas directly into the British grid and the first to be fed solely on grass.

The development in Gloucestershire by Ecotricity, a green energy company, would heat 6,000 homes. It will enter the planning stages within months and could be operating before 2017, should it receive approval.

Britain’s home heating grid is increasingly reliant on imported gas, mainly from Norway and the Middle East. Gas production in the UK has fallen by more than two-thirds since 2000.

Advocates for the fracking industry, including the three major political parties, argue that shale gas will be necessary to maintain Britain’s energy independence. But opponents and the renewable energy industry point to fracking’s slow roll-out and carbon footprint as reasons to bypass the technology.

Dale Vince, founder of Ecotricity, said the company’s system of turning grass into methane could be a game-changing addition to the UK’s energy mix.

“It’s a great concept. And it could be the answer, you know, to how we power the country and fight climate change at the same time,” said Vince. “It’s certainly the answer to fracking because I think we could deploy it more quickly, actually, than fracking can get up and running. With none of the risks. And it’s not going to run out, which fracking will eventually, even if we can afford to burn it from a carbon point of view.”

Does the journalist know what’s he saying/regurgitating? It gets worse:

The plant would harvest grass from farmland within a 15km radius, requiring around 1,600 hectares of land to keep it supplied. Ecotricity said the area of land used for cattle grazing in the UK had almost halved since 1990. Around half the grass would come from pastureland that is little used or no longer used for grazing. The rest would be taken from feedstock.

Let’s do some numbers, even assuming this mad idea would work. It might work in the summer time when grass actually grows, but not in winter when fields and homes get cold is one quibble, but let’s give Vince the benefit of the doubt. His own figures should knock this out of any consideration.

One home would require 1,600 hectares divided by 6,000 or 0.26 hectares or 0.642 of an acre. Could this replace fracking which could easily produce 15 BCM or 20 per cent of all 75 BCM UK gas use, or be enough to supply half of UK household’s use of 30BCM?  Well, it could, apart from a minor detail. That would be 14 million households, which would take up 36,400 square kilometers or 28% of the land area of England. A minor detail. Sure beats industrializing the landscape with that nasty fracking. Solves the obesity and energy crises all at once.

Readers of a paper like the Guardian have a right to trust it. It seems to not only abdicate that duty, but has also suspended the laws of arithmetic. The story’s purpose of course, is to yet again, paint natural gas as something we can safely discard because a miracle is just around the corner. It allows the self-satisfied to be thankful they support Ecotricity and it’s effort to save the earth. Or, the remaining 62% of it. No smog, but plenty of fractivist smug.

The other fracking alternative was from spectacularly mis-guided, but at least honest opponents of fracking in Balcombe. To replace any energy from fracking, they set up a solar collective:

A solar panel scheme has been completed by an energy co-operative set up in a West Sussex village where major anti-fracking protests were held.

RepowerBalcombe has installed 69 solar panels on a cowshed in Crawley Down.

The group is planning further schemes with the aim of generating enough power for Balcombe’s entire electricity use.

More than 1,000 protesters set up camp there in 2013 when energy firm Cuadrilla was test-drilling for oil, amid fears it would lead to fracking.

Local co-op members provided £27,300 to install the panels with the aim of uniting the community after the fracking controversy.

The panels are the group’s first scheme and will produce more than 18,000 KWh of electricity a year – just over 1% of the community’s energy needs – and have gone up at Grange Farm.

At an average of 4,170 kWh per UK household, this means the £27K works out at £6,348 per household. So in six years they’ll be ahead. At least while the sun shines, although now they could add another £5K to buy and installTesla Powerwalls. Not exactly cheap, but smugness and being well off often go hand in hand. 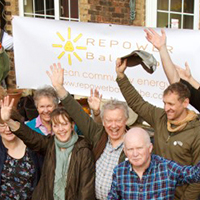 Those who are most big on saving the earth either own a lot of it, or spend a lot of time flying around it. Again, they may want to leave Balcombe since putting solar panels over the entire town rather industrializes that landscape too.

Unlike green energy advocates, I don’t demonise any particular energy technology, apart from coal. No one is as techno optimistic as I, but my optimism is grounded in reality. We are going to need green, gas and efficiency to cut carbon. Pretending that there are simplistic feel good solutions to the challenge will not ensure the development of clean energy, only the continuation of the present system, highly dependent on cheap coal, expensive renewables and wasted energy. We end up with smog and smug. Choking on other people’s words.