Shutting down debate is no way to convince anyone, but Apple has killed Greg Wrightstone’s very successful Inconvenient Facts App. Was it to please Al Gore?.

Why would Apple drop from its App Store a smartphone application that had drawn high praise from users and reviewers, generated thousands of downloads and provided rigorously documented facts on an important topic?

Hint: It has nothing to do with praise or downloads.

The answer surely lies in the app’s subject matter, which is drawn from the book “Inconvenient Facts – the science that Al Gore doesn’t want you to know”. (Another hint: Al Gore is on Apple’s board of directors.) 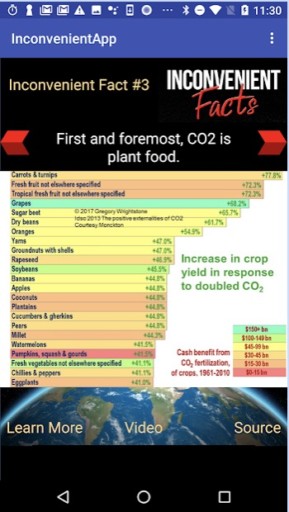 Yes, it appears that Apple has chosen to weaponize its control over purchasing apps to stifle science that doesn’t conform to its politically correct notions. On March 4, the Inconvenient Facts smartphone app was removed from its store after having more than 7,500 downloads since its mid-February launch.

The app contains more than 70 useful science-based charts and diagrams derived from well-respected sources such as NASA, NOAA or peer-reviewed studies. The information provided is a powerful tool that counters the “consensus” of catastrophic man-made warming using science, facts and data. Each of the 60 inconvenient facts in the book are listed along with explanatory text and often with a video created specifically for the individual fact.

Response to the app’s release was remarkable. Downloads of the app are nearing 13,000 (including the Android version) in the three weeks since it was released. The launch was made during a nearly 30-minute interview with Glenn Beck on The Blaze TV.

“You can go to the app and it will help you with the charts and the graphs and everything is sourced, and everything is triple checked to make sure that it is exactly right. Its there on your phone,” said Beck.

Author Bryan Crabtree had this to say: “Simply put, the app is amazing…The book is great, but the app is actually more powerful, in that I see that this can be a game-changer in the debate.”

Was a possible changing of the game more than Apple could tolerate?

Having approved the app for sale February 3, Apple removed it just a month later. It is nearly unheard of for an app to be taken down after approval except for offensive or objectionable content.

In a blog posting, tech-writer Adam Rowe listed five reasons for Apple to ban an app, none of which apply in this case.

In its notice of rejection, Apple acknowledged that there “are no hard and fast rules to define useful or entertaining” but that the app failed to provide “compelling content.” It appears that at least 12,000 people deemed the app sufficiently compelling to download.

A cursory review of pro-climate alarmist offerings available at the App Store reveal a bevy of horribly designed apps with limited “compelling content.” Although their quality is that of failed Middle School science projects, they obviously regurgitate the accepted narrative of climate alarmists.

As the author, I take small comfort in knowing that what we created was so effective that Apple found it necessary to take this extraordinary step to silence us.

I can only imagine some sandals-wearing 20-something with a man-bun sitting at his cubicle in Cupertino gleefully hitting the “reject” button for this powerful app. Or, was the culprit a 70-year-old former vice president and inventor of the internet?

(The app is still available for users of Android devices at the Google Play Store.)

Editor’s Note: I purchased both Greg’s book and the app. The app is still functional on my I-Phone so I guess Apple doesn’t feel strongly enough to take it down and return my money. Sensing this thing could become an embarrassment to their board member, they just don’t any more folks buying it. Like Gore, they simply want to shut down debate with a “Just shut up!” approach to speech.

I’ve never understood that. I allow Vera Scroggins and other antis on this site all the time. It’s because I’m not afraid of her opinions. I know others will rise to correct her whenever she’s out on a limb and the debate is usually instructive. Moreover, occasionally even she makes a good point. I take criticism from all sides and only shut down those relatively few people who attempt to take over the site with dozens of comments on the same post or who use filthy language. Anyone who plays by these basic rules gets to speak here. Try that on any fractivist site. You’ll be lucky to get a single comment approved.

And, it’s not just fractivist sites that are squelching speech. It’s Apple who is doing the equivalent of book burning in this case. Why? Why not simply allow others to challenge Greg where they imagine he’s wrong? What is the problem with speech? If the case for global warming is so strong, advance it with some facts other than “everyone agrees,” dammit. I have no fear of hearing facts from the other side. I know natural gas is doing more to reduce emissions and clean the air than any other single measure. I’m confident in that fact.