Fractivists have been spinning the EPA Study and its Science Advisory Board recommendations from the beginning, especially StateImpactPA.

Since that time antis have been looking for a way to reverse the finding. And we thought they had found it. The EPA appointed a Science Advisory Board (SAB) to re-evaluate the report (see Will EPA Whore Itself to Antis and Change Fracking Water Study?). From their initial meetings and comments, we though the fix was in (see EPA Science Advisory Board Engaging in Fraud re Fracking Study). The mainstream media trumpets the SAB’s statements as indicating the original report and its conclusions are wrong. But if you read what the SAB is saying, you come to a different conclusion. Can it be that the SAB is actually strengthening the case that fracking doesn’t contaminate water supplies?

A scientific panel that is evaluating the U.S. Environmental Protection Agency’s landmark report on hydraulic fracturing and drinking water issued a second draft of its study on Tuesday, making many changes to language and tone but continuing its earlier criticism of the report’s finding that it found no evidence of a widespread impact on drinking water.

The Hydraulic Fracturing Research Advisory Panel, a unit of the EPA’s Science Advisory Board (SAB), released the new draft as part of a process that will include two more public teleconferences, more revisions, and eventually a submission to the full SAB, perhaps by May.

The draft restated the panel’s earlier concerns, published in January, about the EPA’s headline conclusion on impacts to drinking water from fracking for oil and gas but deleted language saying the report didn’t reflect uncertainties and data limitations in reaching that conclusion.

Instead, it noted that the EPA’s conclusion had been interpreted by the public “in many different ways” and now requires “clarification and additional explanation.” The new draft repeated the earlier criticism that the conclusion of no widespread, systemic impact was “of particular concern” because it did not clearly describe the water systems and did not define “widespread” or “systemic.”

It left largely intact its earlier criticism saying the EPA’s executive summary was inconsistent with the body of the report.

“The SAB is concerned that these major findings as presented ambiguously within the Executive Summary are ambiguous and appear inconsistent with the observations, data, and levels of uncertainty presented and discussed in the body of the draft Assessment Report,” the new draft said.

It added language urging the EPA to recognize that the hydraulic fracturing industry is “rapidly evolving” and noting that the long-awaited report, issued in June 2015, drew its conclusions based on data available at the time.

The new draft, running to 138 pages, restated the panel’s concern about the EPA’s failure to conduct baseline testing during its investigation but added language calling on the agency to explain why that had not happened.

“The SAB is concerned that the EPA had planned to but did not conduct various assessment, field studies, and other research, and the SAB recommends that the EPA delineate these planned activities within the draft Assessment Report and discuss why they were not conducted,” the draft said.

It left largely intact its language saying the EPA report needed to do a better job of recognizing the severity of local impacts in places like Dimock, PA.

And then, a breath of fresh air and clear-headed analysis. Was the SAB indicating there’s a disconnect between the conclusions and the body of the report?

Dr. Katie Brown from Energy in Depth took a close look at what the SAB was and is saying, and says the SAB is actually affirming the study’s findings, not denigrating them:

Just a few weeks after Inside EPA reported that the Hydraulic Fracturing Panel of the Environmental Protection Agency’s (EPA) Science Advisory Board (SAB) “appears to be stepping back from its broad disagreement with the agency’s draft study that found no ‘widespread, systemic’ impacts to drinking water from hydraulic fracturing” the SAB released its second round of draft recommendations, which affirm EPA’s topline findings.

While anti-fracking activists have tried to suggest otherwise, the reality is that, far from requesting actual changes to EPA’s topline finding, SAB is asking EPA to “strengthen” its conclusions by making the following requests:

“The Agency should strengthen the Executive Summary and Chapter 10 Synthesis by linking the stated findings more directly to evidence presented in the body of the draft Assessment Report. The EPA should more precisely describe each of the major findings of the draft Assessment Report, in both the Executive Summary and Chapter 10 Synthesis, and provide a full accounting of all available information, including specific cases of drinking water impacts, that relate to these major findings.” (emphasis added)

In other words, the SAB is saying the finding stands, but that EPA should provide more numbers in its Executive Summary to support that finding.

EPA’s landmark groundwater study took no less than five years to complete, and is far and away the most comprehensive study ever to be done on hydraulic fracturing.  As EPA’s Science Advisor and Deputy Assistant Administrator of EPA’s Office of Research and Development Dr. Thomas A. Burke said in a press release,

“It is the most complete compilation of scientific data to date, including over 950 sources of information, published papers, numerous technical reports, information from stakeholders and peer-reviewed EPA scientific reports.”

EPA’s study actually builds upon a long list of studies that show the fracking process poses an exceedingly low risk of impacting underground sources of drinking water. In just the last few weeks, the results of an ongoing University of Cincinnati (UC) study in Ohio’s top shale counties, which included baseline samples, were made public. As one of the researchers, Dr. Amy Townsend-Small said, samples that were high in methane “clearly did not have a natural gas source.”  She also said, “There was no significant change in methane concentration over time, even as more and more natural gas wells were drilled in the area.”

EPA’s study also corroborates a “landmark study” by the U.S. Department of Energy in which the researchers injected tracers into hydraulic fracturing fluid and found no groundwater contamination after twelve months of monitoring. It is in line with reports by the U.S. Geological Survey, the Government Accountability Office, the Massachusetts Institute of Technology, and the Groundwater Protection Council, to name just a few.

Indeed, if there were anything to suggest widespread or systemic impacts to drinking water as a result of hydraulic fracturing, such evidence would have been uncovered during the past decade of extensive study of the process, and the SAB would be able to cite that evidence. 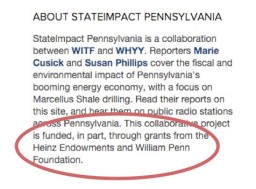 Editor’s Note: Jim’s comparison of the two articles reminds me so much an exercise from one of my Penn State social psychology courses of main years ago, when we were asked to analyze seven different newspaper reports of the same event. Each supposedly objective reporter, of course, covered it from their perspective and the result was starkly different analyses, all offering a bit of the truth, but with some being far more objective than others.

Objectivity, of course, isn’t supposed to be relative but, human nature being what it, there is no such thing is true objectivity. Even a list of nothing but the facts is subjective based on which facts the reporter chooses to report or leave out and the order in which he or she places them. We all introduce our bias into what we write, so the lesson in reading what others report is to simply be aware of it, to understand the reporter’s perspective and to account for it in arriving at one’s one opinion.

The lesson within the lesson, moreover, is to be especially on-guard with those who claim to be objective and non-partisan; there is no such thing, especially at StateImpactPA where the reporter salaries are effectively paid by fractivist special interests such as the uber-wealthy Haas and Heinz families who also underwrite the Clean Air Council, the Delaware Riverkeeper, PennFuture and myriad other fractivist entities.

One thought on “Ignore the Spin: Science Advisory Board Affirms EPA Study”