Two big states, California and Illinois, made news recently by issuing proposed regulations on hydraulic fracturing. Here’s some perspective on what these states are doing (and one similar state is not).

On Friday, November 15, the California Division of Oil, Gas and Geothermal Resources issued proposed regulations governing the process in California.  The regulations, which also will cover “acidizing”, were promulgated following the passage earlier in the year of SB4, the State bill first regulating both processes.

One of the most important pieces of the regulations is that a State permit must be obtained to frack any well, and the neighbors must be notified at least 30 days in advance of any fracking.  In addition, there are disclosure requirements for the chemicals used in the fracking, and monitoring requirements for adjacent groundwater.

California is home to the Monterey Shale Basin, which possibly could be one of the world’s largest oil fields.  In addition to hydraulic fracturing, producers in California use a process called “acidizing”, in which powerful chemicals are poured down a well to open tiny channels in underground rocks.  This process releases hydrocarbons, with the attendant environmental concerns. 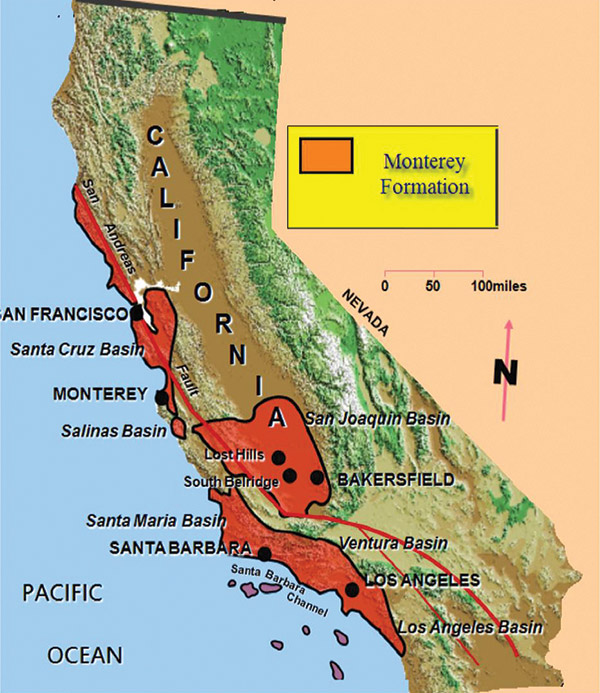 The regulations will not come into effect until January 2015, and may change.  Currently, there is a 60 day period for public comment.  Overall, while the regulations are significantly more stringent than previously contemplated, they generally were accepted by the industry. Catherine Rehels-Boyd, President of the Western States Petroleum Association, released a statement that .. “(t)hese regulations are extensive but strike the right balance that will result in an environmental platform which will ensure that the potential energy resources contained in the Monterey Shale formation can be responsibly developed.”

Until 2015, California regulators will use interim regulations very similar to those proposed.  However, there will not be a requirement to obtain a permit before fracking a well.  Instead, developers must certify to the State that their work complies with all applicable state rules and regulations.

At the same time as California, the Illinois Department of Natural Resources published its first set of proposed rules.  The Illinois public comment period runs through January 3, 2014.  Of interest in the Illinois regulations is the chemical disclosure section.  That section  requires the disclosure to the State of a complete and redacted list of chemicals even when claiming trade secrets, together with the reasons the company believes public disclosure would violate a trade secret.  It will be the State of Illinois, not the company, who determines whether the chemical will be disclosed publicly or not.

In Pennsylvania, Royal Dutch Shell continues to debate whether or not to invest billions of dollars in an ethane cracker plant north of Pittsburgh.  While Shell stated from the beginning that the final decision on whether or not to build the plant might take years, State officials were pleased to hear the company is continuing to evaluate moving forward, especially after Shell announced on October 28 that it would not immediately pursue shale development and was taking a $2,200,000,000 charge against earnings.

Meanwhile, the impacts of shale continue to ripple into industries such as transportation.  This month, the aviation consulting firm of Mead & Hunt announced it was opening offices in Fargo and Bismarck, North Dakota.  The firm has 25 offices nationally.  Prior to the development of the Bakken Shale in Western North Dakota, it is hard to imagine any such firm choosing North Dakota, historically the least-visited state in the nation, as being a likely candidate for expansion.  Thanks to shale, that’s all changed.

Meanwhile, outside of the United States an estimated 400 non-conventional wells may be drilled in 2014 according to the consulting firm Wood McKenzie, Ltd.  Most of those wells will be in China.  That figure, of course, represents just a fraction of those drilled in the United States.  Still, the shale revolution is spreading around the globe, affecting energy markets internationally.

During Thanksgiving, many of you ate turkeys cooked in gas ovens fueled by the products of hydraulic fracturing, at lower costs than anyone thought possible five years ago.  Five years from now, it is likely that what we discuss here is only the beginning.

Daniel B. Markind, Esq. is a partner and the Chair of the Business Group at Weir & Partners LLP.  The views expressed are his alone and not necessarily those of the Firm.  The provision and receipt of the information in this publication (a) should not be considered legal advice or any other kind of professional advice, (b) does not create a lawyer-client relationship or an agreement to provide legal services, and (c) should not be acted on without seeking professional counsel who have been informed of the specific facts.  The content is designed for general  information purpose only and is not guaranteed to be correct complete or up to date. Under the rules of certain jurisdictions, this communication may constitute “Attorney Advertising.” The determination of the need for legal services and the choice of a lawyer are extremely important decisions and should not be based solely upon advertisements or self-proclaimed expertise.

2 thoughts on “Hydraulic Fracturing Regulations for CA and IL, What Price NY?”