Hunters Sharing the Harvest was awarded a Community Connector Grant from PennEast Pipeline Company LLC at their 2nd annual Friend-Raiser!

Following the May 18th Wyoming County Chamber of Commerce Business Showcase at Shadowbrook, in Tunkhannock, Cabot along with Cintas, Bulwark FR, and the Chamber, sponsored the 2nd Annual Hunters Sharing the Harvest Friend-Raiser. Hunters Sharing the Harvest (HSH) is Pennsylvania’s charitable venison donation program for hunters who share their extra venison via a statewide network of participating butchers to food banks across Pennsylvania. The purpose of the Friendraiser event is to attract financial sponsors to the program and, more importantly, hunters willing to share their venison with those in need. 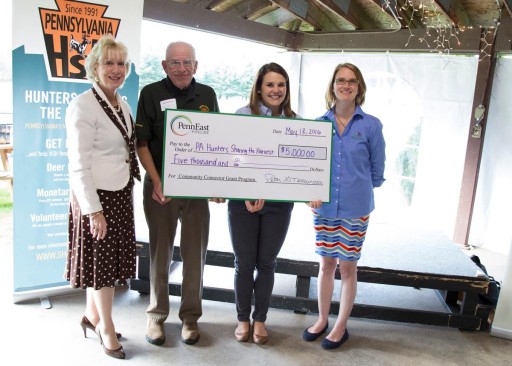 The highlight of the event is the wild game dinner prepared by Ma Greenly’s BBQ. On the menu were yak, bear, venison, salmon, and house favorite pulled pork.

John Plowman, the Executive Director of HSH, took some time during the event to recognize Matt Andrews of Deer Park Lumber Co. & Mt Energy Services for each company’s generous donations. Plowman highlighted how these funds were being used to offset the cost of butchering in NE and SE regions of Pennsylvania, specifically areas that have not had access to the program before.

Plowman also recognized HSH’s newest corporate sponsor UGI Energy Services (UGIES). UGIES presented HSH with a $5,000 donation. Along its PennEast Pipeline route these funds, Plowman remarked during the check presentation, will be used to pay butchers to process the deer meat before it goes on to the food bank. He continued, “these countries are key to our program. They have a lot of great hunters eager to help feed hungry families.” UGI commemorates this new partnership with a video featuring John Plowman discussing the impact HSH is having throughout the commonwealth. You can find the video at the bottom of this post. 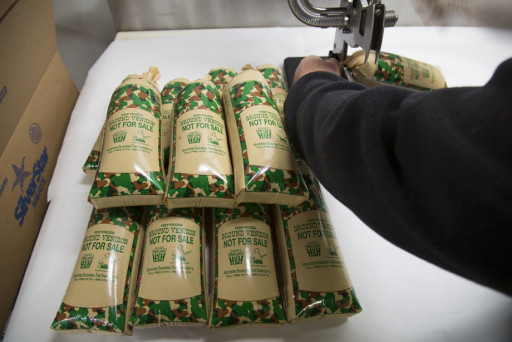 State Rep. Karen Boback, a long time supporter of HSH also made an appearance. She thanked Plowman and all of the sponsors and hunters present for going out of their way to help feed those in need.

The biggest announcement of the night came at the end of Plowman’s speech when he announced a new HSH milestone: after an outstanding hunting season, HSH has officially reached 1,000,000 lbs of venison donated, since its inception. Plowman thanked all of the sponsors and the hunters for making this possible and concluded the event by saying, “here’s to the next 1,000,000 lbs.”