Betty Sutliff, retired public school teacher, UDRBC secretary and former NWPOA officer, had a message for the DRBC yesterday; it’s all about the justice.

Good morning, Chairman Metcalfe and members of the State House Government Committee.  My name is Betty Sutliff and I would like to thank you for the opportunity to speak today.

I would like to address the double standard that exists between the Delaware River Basin and the Susquehanna River Basin in Pennsylvania with regard to the extraction of natural gas and the injustice of that double standard.  As a retired teacher, my first step in preparing for today, of course, was to consult Merriam-Webster and others with my sights focused on the words “unjust” and “injustice.”

I would like to give you specific examples of how the people of my county, Wayne County, are being treated unjustly or with injustice by Governor Wolf and the Delaware River Basin Commission.  As we speak, natural gas is being successfully extracted in many parts of Pennsylvania using the technique called hydraulic fracturing or fracking.   Governor Wolf has lauded the development of natural gas as a clean source of energy and criticized New York State for their strict stance.  The following are excerpts of his quotes.

“They’re a lot more restrictive,” Wolf griped at a July event, when asked about Cuomo’s policies. “It’s so restrictive in New York that we can’t even pipe our gas across its borders to New England, which really needs a clean source of energy.” (City & State Pennsylvania May 20, 2016)

“New York’s policy is because they are concerned about how advanced the (drilling) techniques are in fracking to assure themselves that (they) have a good clean environment,” Wolf said. “But I don’t know how you can assure yourself of that without actually doing it and regulating it and overseeing it and making sure you’re doing things right. So that’s the big distinction as I see it. Their policy is to not do it at all; mine is to do it, and do it right.” (City & State Pennsylvania May 20, 2016)

“I’m a very strong environmentalist, but I believe with the right regulations, the right oversight and right enforcement that we can do (gas drilling),” Wolf told City & State last month. “Most people, I think, want to do it, but they want to do it right. And that’s where I come down.” (City & State Pennsylvania May 20, 2016)

“Governor-elect Wolf opposes a ban, and he will work hard to make sure the process is safe,” responded Jeffrey Sheridan, Press Secretary for Wolf’s transition team.

“Pennsylvania’s natural resources should help the commonwealth become an energy leader, including renewable energy and energy efficiency, as well as a magnet for investment and job creation,” he continued. “Governor-elect Wolf’s priority is to ensure that Pennsylvania is an energy leader with all Pennsylvanians sharing in the prosperity. 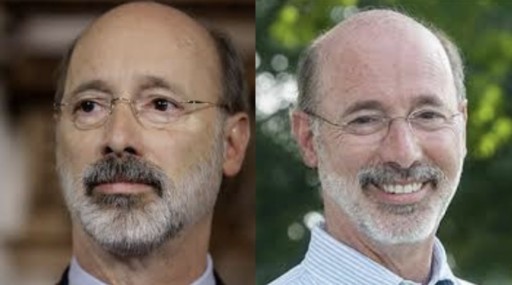 In Governor Wolf’s inaugural address, he said that Pennsylvania “has to offer a level playing field making sure all businesses, all Pennsylvanians, have a chance to get ahead and that all Pennsylvania’s families deserve the same opportunities.”  He also said we needed to be “willing to listen to each other . . .and learn from each other . . . and work together to give all Pennsylvanian’s a shot at a great life.”  He didn’t say all Pennsylvanian’s except from Wayne County.  On June 8, 2015, along with six others, I met with Governor Wolf regarding natural gas development, and what was very telling in that meeting was not so much what was discussed, but what was never mentioned by him – a concern for water quality.  The meeting was all about his desire for a severance tax.

Saying that the basins are to be treated differently based on their Compacts – Susquehanna being concerned about  “quantity” of water only and Delaware is “quantity and quality” of water is a ruse because the SRBC has been monitoring the quality of the river and I quote, “the Commission’s monitoring programs have not detected discernible impacts on the quality of the Basin’s water resources as a result of natural gas development.”

There is water of exceptional quality in both watersheds, so are the people downriver in the Delaware Basin somehow different or more privileged than the people downriver of the Susquehanna, including the Governor himself?  How can it be that if a raindrop rolls down the western side of a mountain into the Susquehanna Watershed, it can be used safely to extract natural gas, but if it rolls down the eastern slope, it can’t?  The people on the eastern side of the mountain have lost out on an economic opportunity that the rest of the state enjoys.   They are not allowed to harvest and profit from what is rightfully theirs.

Last fall my husband and I attended the Harford Fair in Susquehanna County and spoke to many vendors.  One vendor, who sells farm equipment, told us that he doesn’t even set up at the Wayne County Fair because there is no money there.  Farmers are hurting and the economic disparity between those who get Governor Wolf’s “yea” vote and those who get his “nay” vote is unjust. 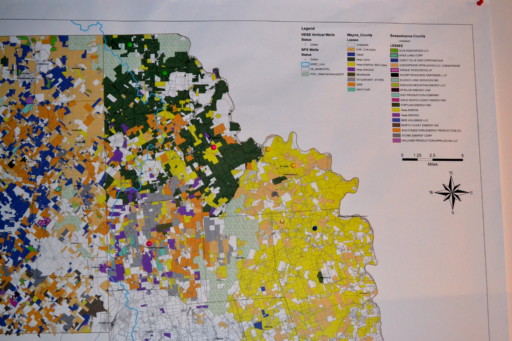 You can see from the map provided of leased land in Wayne County that most landowners favored the exploration of and extraction of natural gas.  I actually did the courthouse work that went into the making of that map so we could plot which companies were leased and in what areas. These same people, the Northern Wayne Property Owners Alliance (NWPOA), those colored in yellow, cared so much about their land that they spent over two years and three-quarters of a million dollars to construct a lease that was so environmentally protective that it was way ahead of DEP at the time, and it’s gone.  These folks, who did due diligence and put the environment ahead of their wallets, have all been released.

Especially disheartening is the fact that the members of just the NWPOA, whose lease bonus payments for the second half of the lease, an estimated 187 million dollars, lost all that future income when the de facto moratorium set in and the gas companies left.  Those folks have already been wronged.  For my husband and me that amounted to $150,000 of lost income, and that’s not counting any possible future royalties that we may have achieved.  I have three sisters who, as a result of inheritance, own only mineral rights to family land.   A ban renders their inheritance of those rights worthless.

Who gave Tom Wolf and Andrew Cuomo the right to choose prosperity for some and poverty for others?  What is the rationale they use to vote one way in one basin and the opposite in another?  Why do they treat the lives of those of us in the DRB with a different standard?  Why is opportunity afforded or denied based on which side of a mountain water descends?

This discriminatory treatment of a couple of counties in Pennsylvania is totally inequitable, partial, unfair, and wrong. The DRBC is operating in a fashion completely the opposite of the SRBC even though it is composed of the same governing majority of members.   How can the very same individuals who sit on the DRBC vote the exact opposite when they sit on the SRBC?  Both basins supply drinking water and contain special protection waters.  If the SRBC’s “remote water quality monitoring network has not detected discernible impacts on the quality of the Basin’s water resources as a result of natural gas development, “ then what would make anyone think that it would be dangerous in the DRB? 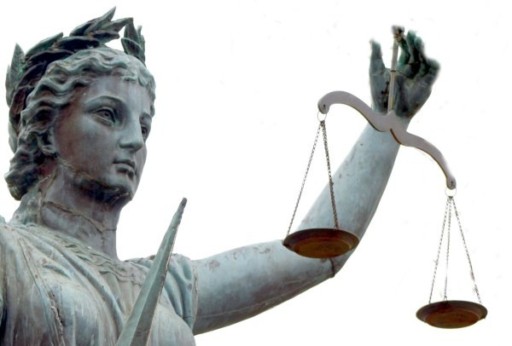 Justice – the quality of being just; righteousness, equitableness, or moral rightness

Just – based on or behaving according to what is morally right and fair.  Synonyms include: upright or righteous, equitable, fair, and impartial

Once again, I would like to thank the committee for this opportunity to represent my fellow Wayne Countians and speak before you today.  I would be happy to answer any questions you may have.

6 thoughts on “House Committee Told It’s All About Equity, Fairness and Justice Missing at DRBC”