The climate change march in New York this weekend was a Hollywood B-Movie production that illustrates how little fractivists have to give.

This past Sunday in New York City a march was held to protest climate change. From all the news coverage (there wasn’t really that much} it was a big hoopty-doo that brought activist in from all over the USA and according to the coverage I did see, several countries.  The reason for the march this past Sunday was so the protestors could coincide their activities with the United Nations Climate Summit and get together to show the world its their way or doomsday. Like most fractivist initiatives (and this might as well have been one given the lead role of folks such Mark “Buffalo” Ruffalo), it wasn’t very convincing.

One thing I noticed in all the reports prior to the march was that there was going to be a big draw and apparently it did attract a lot of people, but what was the draw? It appears, in this case, it was Hollywood actors such as Leonardo DiCaprio and Mark Ruffalo, a one per center taking your tax dollars to fund his solar statement.  Throughout the media coverage of this march I read of no scientist, no scholar in the field of climate change or no experts of any kind who were highlighted. Rather, it was largely a string of statements from Hollywood activists who live in high energy consuming mansions bragging on their ability to sway the masses of populated areas to their point of view.

DiCaprio just bought this home (below) to replace the one he sold and add to his collection:

According to the article:

The latest purchase comes on the heels of a spate of real estate activity for DiCaprio, who bought an eight-figure “health-centric” home in Greenwich Village in November and sold one of his Malibu homes for $17.35 million in December.

How nice of Leonard to shower us with instructions about how to live. He says “This disaster has grown beyond the choices that individuals make” – his way of rationalizing his own choices and lifestyle while asking everyone else to do something and satisfying his desire to imagine he actually did something. And, by the way, that new “health-centric” home includes a gas range depicted in this picture:

Are We Going to Let Hollywood Run This Country?

The People’s Climate March was, in short, a a manufactured bit of Hollywood play acting that predictably drew a lot of people but did it mean anything? We know the numbers will be exaggerated over and over again like other fisherman and fractivist tales.  The coverage started out with news accounts of 100,000 to 300,000 participants, then grew to 400,000 and I’ll bet the count will soon be inflated to over a million by the usual suspects in the upstate fractivist camp. However many there were, it means little if the attraction was the actors and the participants had nothing better to offer than this:

Are a Romper Room dropout like DiCaprio or a few lucky busboys, perhaps a waitress, who were discovered and fell into the arms of Hollywood for their playacting abilities, going to decide for us?   We’re done as a country if they are. DiCrapio is a high school graduate good at role playing, not a scientist or an expert on anything but acting. Not one of the speeches I heard them give was anything but fear mongering and/or the politically correct thing to say, with absolutely no science to back up the words.  These Hollywood activists are using climate change to give them meaning in a make-believe world and accord them the power of influence as stars.

Don’t get me wrong. I believe in climate change and I believe it has been changing since the earth began and that it will forever be changing and nothing we can do will ever slow it down or make a meaningful difference one way or the other. The earth has been much warmer before then now and there’s no such thing as a perfect temperature. I also believe pollution happens and that is what we should be targeting, not trying to impose some impractical utopian vision. DiCaprio’s speech to the UN Climate Summit (which tells you how unserious that effort was) read like a 9th grade school essay. What’s wrong with our institutions, that they descend to listening to such drivel? Are DiCaprio and Ruffalo going to set policy for us? If so, we’re the ones who are doomed.

One of the saddest things I saw that came out of this march was this Tweet, which tends to tell us more about the participants than perhaps anything else: 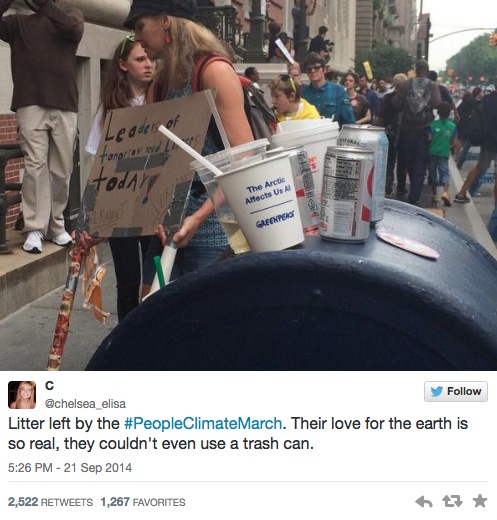 Ordinary Americans, not these self-important actors and spoiled children, should be running the country. Our problem is not that we are right and they are wrong, but that we are apathetic and find excuses not to take charge, sitting and waiting to see what happens.

October 15th is the deadline to register to vote in the New York State gubernatorial election, so I am asking you if you care then register and then get out and vote on November 4th. This is one of the few times we can participate in our own destiny and, no matter who wins, if you voted you can tell those who ask you what you did to change for the better. You can tell your grandchildren with pride you voted. If we could double the vote count it will, win or lose, send a message to all politicians that we are paying attention. My vote is going to Astorino for exactly that reason and, again, win or lose, if enough of upstate does the same, perhaps the politicians and policy makers will spend a little more time listening to us than Leonard DiCaprio, Mark Ruffalo and all the other phonies on display at the “People’s” Climate March.

Editor’s Note: For some insight on how crass the People’s Climate March was and who the “people” really were, read this leftist analysis. Take note of the corporate sponsors, the branded PR campaign nature of the whole event (supporting Vic’s perspective) and the role of 350.org, the Rockefeller organization. The “people” who made it happen were some of the wealthiest on Earth pursuing their own special interest agenda by co-opting some of the biggest useful idiots to be found.