Holland Township, New Jersey proves there is no free lunch when it comes to energy. Attempting to address energy needs with anything but reason never works.

Our friend and guest blogger, Jim Willis, over at Marcellus Drilling News, has his ear closer to the ground than anyone I know and regularly picks up stories outside the mainstream of gas industry news. One of those, from Monday of this week, was about a potential new natural gas fueled power plant in Holland Township, Hunterdon County, New Jersey, of all places. He related the details from a NJ Spotlight article focusing on the appearance of Phoenix Energy Center, LLC before the Township Planning Board to discuss the possibility of a new 600 MW power plant at an old industrial site along the Musconetcong River. Could it be? Yes, indeed, because this municipality is slowly learning energy choices aren’t as simple as fractivists have been asserting.

NJ Spotlight, of course, is financially supported by the William Penn Foundation, so news from this source, like that from StateImpactPA, is fractivist-leaning (using the same reporters in some instances). It channels Sierra Club bully Jeff Tittel’s message in this instance and suggests PennEast Pipeline opposition by Holland Township could somehow present an obstacle:

Probably one of the biggest hurdles facing the project is the Musconetcong’s designation as a C1 stream, a classification that includes an anti-degradation policy to protect the water from any deterioration in quality, according to Jeff Tittel, director of the New Jersey Sierra Club.

Typically, power plants require huge amounts of water, which is then discharged at higher temperatures into a nearby waterway. “It’s a C1 stream,’’ Tittel said. “There can’t be any measurable change in water quality.’’

At the planning board meeting, consultants for the company indicated the plant would withdraw up to 5.4 million gallons of water a day from wells or from the river, and discharge more than 1.5 million gallons into the river daily, according to Tittel, who was at the meeting.

There is a nearby pipeline belonging to Elizabethtown Gas that might supply the fuel needed to run the plant, although that connection could pose a problem. Elizabethtown is one of the sponsors of the controversial PennEast pipeline, a 120-mile conduit between Luzerne County, PA, that would end in Mercer County. Holland Township opposes the pipeline.

The idea PennEast opposition presents an obstacle to approval of a plant is politically naive, of course. The plant would pay huge amounts of property taxes or similar payments in lieu of taxes, probably enough to significantly lower other taxes. Does anyone imagine Holland Township isn’t going to seriously consider the proposal under those circumstances? Of course not, and that’s why Jeff Tittel is worried. Likewise, the fact there can’t be any measurable change in water quality is hardly news, as power plants would typically have to meet the highest standards for stream discharges and can do so.

What’s especially interesting in this case, though, is this; Holland Township is not that big a fan of solar and wind. When I read the NJ Spotlight article, I decided to do some research of my own by checking the Township’s online meeting records and see what the planning board minutes might have revealed. The May 14, 2018 minutes (most recent published) offered no more than this:

Discussion took place about one of the old mills becoming a power generating station with cooling water being discharged into the Musconetcong River.

So, I checked further and learned Holland Township has had some experience with solar and wind energy as well, having approved two solar projects and enacted regulations allowing small wind energy systems. The township has also done an update to its Farmland Preservation Plan and the April 9, 2018 included a draft prepared by its Agricultural Advisory Committee (AAC). While solar and wind are Jeff Titell’s standard answer to how New Jersey should meet its future energy needs, the township has adopted a much more skeptical stance, as is obvious from these excerpts:

Since the 2010 plan, two applications have been approved for solar facilities. The first site is known as Garden Solar located on Spring Mills – Little York Road. The application was filed in September of 2011 and heard between November 2011 and January 2012. The Applicant was approved to construct two solar arrays that are not connected to each other in March of 2012. The second is known as the Mill Road Solar Project, located at 10 Mill Road. This application was filed in January 2016. On November 14, 2016 the application was deemed completed. Public hearings occurred in January, February and May of 2017. The Board approved the application and memorialized the resolution in June of 2017. The site consists of Block 2, Lot 1.02 (abandoned paper mill buildings) and Block 4, Lot 1 (farm fields). The Applicant was approved to construct a solar farm facility consisting of three distinct solar arrays on the site, generating 8.9 megawatts… 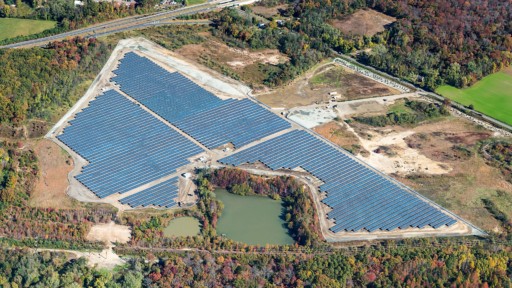 A 9.9 MW solar system in Howell, NJ that will, in reality produce less than a third of that and consumes as much land as a gas plant with a real capacity of 200 ± times much power.

It should be noted that in 2009 the State passed legislation that added “wind, solar or photovoltaic energy facility(ies) or structure(s)” as inherently beneficial uses. The statute also permits renewable energy facilities on parcels of 20 or more acres owned by the same entity in all industrial zones.

In October of 2012, the New Jersey Department of Environmental Protection issued a Solar Siting Analysis…

Sites not preferred by the Department for Solar Development are as follows:

…In reviewing any future solar applications, the AAC encourages the Planning and Zoning Board to refer to this guidance document in evaluating the site(s) selected by the developer.

The AAC is concerned about the impact solar facilities will have on the Township’s view sheds as well as the impact to farmland soils where these arrays are installed.

As noted in the section above, wind energy facilities have been determined by the State to be inherently beneficial uses.

The same document also raised concerns about the PennEast Pipeline (all non-issues in the real world) but that was to be expected. What might be surprising to some is Holland Township’s concern with the “proliferation of solar farms” and wind energy for some of the same reasons, mostly aesthetic. If preserving bucolic landscapes is the goal, we might ask how a solar or wind farm could possibly be less visually impactful than this pipeline near my home: 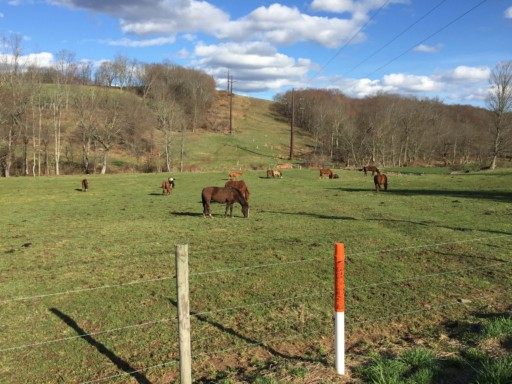 But, the bigger point is that energy choices, like doing anything else, involves tradeoffs and, as Tony Ingraffea learned to his regret in Ithaca, renewables are no easier to sell to NIMBYs than gas projects. The same people who oppose pipelines and power plants also oppose solar and wind when it’s tried on any scale.

Moreover, solar and wind are far more visually impactful and far more more land consuming per MW of energy produced than almost anything else. Holland Township has merely confirmed what I know from my professional experience in reviewing these projects for municipalities. Those opposed to gas also oppose solar and wind anywhere near their own properties, regardless of the worthiness of the project or their own previous statements supporting solar and wind elsewhere.

What Holland Township is learning, like so many others, is that there are no free energy lunches, despite everything Jeff Tittel and friends have told them. Energy production, like anything else, has impacts. We’ll see what happens with this proposed power plant. I can only imagine the opposition from Tracy Carluccio, Deputy Delaware Povertykeeper, who virtually runs the New Jersey Highlands Council, after all.